VoxTalks With Shankar Mahadevan : ‘With Dedication And Determination, Even The Impossible Can Be Achieved!’ 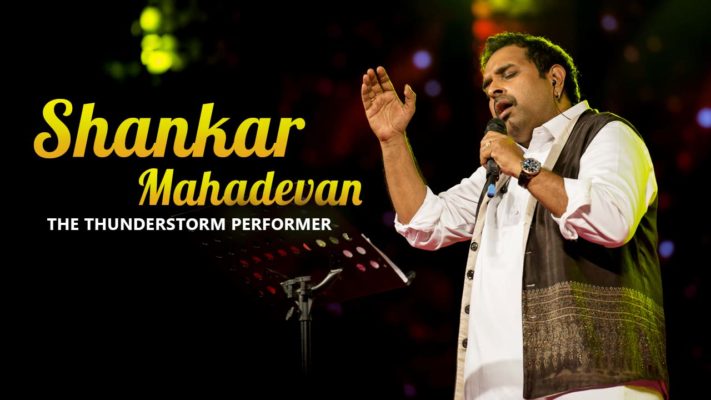 He galvanizes any number of the crowd with his vocals. His mesmerizing energy levels are impossible to attain for even the youngest playback singer. Whether on the mike or off the mike, he makes sure that the audience rejoices his presence. There is no genre which this gentleman is unaware of- ranging from Carnatic Music to Punjabi Bhangra!  Many Telugu film heroes from late 90s owe a lot to him for the power-packed introduction songs he has given them. His journey from a jingles singer, to a band, lead singer and then a composer along with being an actor is quite inspirational for sure. He is none other than Shankar Mahadevan- a singer who can make the audience “Breathless!” with his voice! On the eve of world music day along with fundraising cause for Sparsh Hospice, Hyderabad, we happened to catch up with him over a swift conversation

How different is it to perform for Hyderabadi audience once again?

The hyderabadi audience are quite versatile in their own accord. The best of south and north Indian music is appreciated in this land. It is always a pleasure to perform for Hyderabad and that too for a humane cause this time.

Can you please tell us how different this concert is going to be compared to other shows of yours?

Music is one aspect which brings people together and spreads peace. It also brings solace for the tired soul and soothes it. The entire idea of living life to the fullest can be attained in the best path of relishing music. For this concert, I chose such songs which enable people to understand the importance of life and how beautifully one should embrace the current moment. Every moment is a gift and we need to make the best out of it. Of course, I would be singing some Telugu numbers as well!

Speaking of Telugu songs, how do you manage to render such perfect Telugu diction despite being a neighboring language?

The greatest aspect of Telugu according to me is- every syllable and emotion can be penned into a script- when it comes to Tamil, Kannada, and Malayalam- a letter has multiple soundings. I really enjoy singing Telugu and over the course of years, I started learning the language as well! So, I’m no longer alien to the language.

What is the secret behind your breath control in renditions?

First and foremost, the most famous breathless song was not done in one take. I’d die off if I sing a song in a single take at a recording studio (laughs).  However, over the course of time, I mastered the song to sing it double the speed in a single take during my shows. The key is to practice consistently and have a love for singing. With dedication and determination, even the impossible can be achieved! I’d only advise the singers to be determined and push their individual limits to excel themselves. Most importantly, a singer should be original in their voice texture.

Your indulgence into Indie music was quite a marvel. Can we expect the same phase to repeat again?

Because of the commercial tie-ups and mainstream Bollywood, we (Me, Ehsaan and Loy) couldn’t focus much on indie music from which we came from. We really would love to do albums which resemble our earlier off-beat album Rockford. The pleasure which such album gives is quite something. We are indeed planning such projects ahead and I’d love to collaborate with experimental artists for the same.

What are the limitations of Commercial Film composing?

No matter how much a commercial film boasts of being off-beat, the limits are inevitable. Composing for a larger section of the audience is always a challenge because the composer needs to think on the lines of the masses. But when it comes to Indie films, the experimentation is on the forefront. As composers, we get a more free hand in being ourselves and use something unconventional during making music. An Indie film will obviously have unconventional themes and that allows composers to bring out their best.

What are your personal favorite raagas (Carnatic and Hindustani) which you would never get bored to sing?

Well, I love Carnatic Thodi a lot for its deep feel. Despite its tough outer shell, the raaga has much more to it than it looks. I also love grand ragas like Kambhoji in Carnatic. When it comes to Hindustani I love Yaman Kalyan and Kirwani for the multiple hues.  These are my absolute favorites anytime in the day or night.

How do you manage to be on such energy levels all the time?

It was a tough journey for me to take the big leap from my mainstream career engineering to a playback singer and composer. Thanks to my wonderful wife, kids, and my friends, I always draw positivity and energy from their support. Of course, it is the audience and crowds who constantly radiate energy to me all the time. Most importantly, when I see people like Mr.Mohan Hemmadi (Owner of Surmandal and one of the organizers of this event), being 82 years old and yet striving so hard to promote arts so well, that’s more than enough!  My energy levels are not self-created but from the people around me.

Related posts:
[VoxSpace Life] Gurgaon Pubs Have A Different Tale To Narrate In The 21st Century Regarding Crimes A...
[VoxSpace Tech] Dear Influencers, Who Are You Duping With Your Tantrums?
[VoxSpace Selects] The Boy In Blue - 90 Years Of Hergé's Tintin