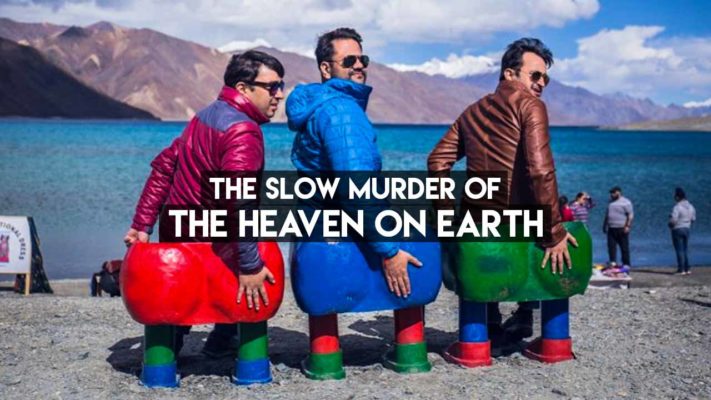 Are We Really Killing Ladakh?

Snowcapped mountain peaks playing hide-and-seek with the clouds, crystal clear glacial lakes changing hues with every tick of the clock, Buddhist monasteries instilling myriad colours to the otherwise barren landscape and piping hot momos adding the silver-lining to every mood – for a tourist, this defines an ideal trip to Ladakh. But have you ever wondered how Ladakh feels with the outburst of tourists, which is on a considerable rise every year?

It started in the year 2009, with the film ‘Three Idiots’ bringing the ethereal beauty of this picturesque landscape to the limelight. And that was it – since that year to this very moment, Ladakh has been seeing a massive increase in tourism to the point that what seemed like a good business for this land initially, slowly turned into a poison for its environment – killing this picturesque land of barren mountains and glacial lakes slowly but steadily.

According to government estimates, nearly six lakh tourists visit Leh (the capital of Ladakh) every year, which is interestingly an abode to just 1.5 lakh people. In fact, according to environmentalist/engineer Sonam Wangchuk – on whom the character Phunsuk Wangdu of ‘Three Idiots’ was conceptualized – in just half a century, Ladakh might simply turn into another Antarctica or Sahara desert, with not even a drop of drinking water for the inhabitants of the land, let alone the tourists.

No; it is definitely not global warming that is so fiercely trying to denigrate Ladakh from a tourist haven to a deadly rugged desert. It is us – the tourists – who are catering much more to the local pollution than Ladakh could possibly tolerate. Thus, bringing doom to this beauty much earlier than global warming could.

As we have already discussed, the boom in tourism in Ladakh has been massive – much more than the Ladakhis can possibly take. Of course, they get richer by money but somehow nature does not understand the concept of monetary bliss. The unrestraint tourist business in Ladakh is seeing the glaciers shrinking at an alarming rate as a result of which the water resources are slowly depleting. This is because, as Wangchuk points out, Ladakh lies at the rain shadow region of the Himalayas, which is predominantly from where Ladakh gets in dry and rugged climate and terrain. The glacial water resources are the only source of drinking water to the Ladakhis, the depleting of which may prove to be havoc on the locals.

Talking of water, another concern that has been adding to these woes are the problems of bottled or mineral water. Now as you would know, 70% of the tourists while travelling prefer bottled water over the regular filtered water. Once you are over with your 1 litre or 5 litres’ bottle, you have to crush it and dump it. One tourist needs a minimum of two litres of water on a daily basis – imagine how many bottles would 600,000 tourists dump in one year? Added to this are other plastic wastes. Have you ever wondered what happens to these especially in a place like Ladakh, which is intrinsically a small, not-so-developed place?

Here, one has to remember another thing. Being a place situated in one of the remotest corners of India, the nearest city close to Ladakh is as far as 1,000 kilometres. Since Ladakh does not have any mineral water manufacturing unit, all the water bottles that you use there comes from cities like Delhi (which is the closest metropolitan) and few others near Delhi. This aids us in calculating the approximate carbon footprint that one tourist leaves behind when travelling in Ladakh. Similarly, packaged food is another woe that is slowly aiding this denigration of Ladakh’s climate.

Does One Stop Travelling To Ladakh?

Now, after going through the climatic harm created by basic human necessities like water and food, any conscious tourist (or traveller, if we may say so) would question if one should stop visiting Ladakh altogether? Well, the answer to that is an absolute NO – especially when it is catering to the local economy in great ways. But what we as tourists can do is choose to be responsible and travel sustainably. It may require a bit of practice but once you start doing it, we promise travelling will be emancipating in ways more than one.

Notably, there have been numerous substantial efforts on the part of ecologists and responsible Ladakhis to usher in sustainable tourism. From organizing responsible treks to opening eco-friendly, more traditional homestays, some people in Ladakh are indeed doing their best to start a movement to save Ladakh. But do you think one-handed effort can last long?

However, the main role that has to be played in delaying the climatic change by a considerable number of years will be by the government. Just like the Himachal government has taken a stance on the number of tourists that can go up to the Rotang Pass, something similar can be attempted by the government here. Otherwise, not only the Chadar trek will cease to be in a matter of a handful of years but there will be no azure water glistening with the sunrays in the Pangong Lake.

According to an article by the Financial Express, the tourism department of Jammu and Kashmir is also trying its might to stop overcrowding Ladakh. Department Secretary Rigzen Samphel recently said, “By sustainable growth we don’t mean that we should stop tourists from coming but to open newer routes and destinations. Also to become a year round destination and not just have a surge of tourists during May-June.”

A look into the article by Financial Express will showcase how the government is trying to transform Ladakh into an all-year-round destination. Do you think that will solve the issues rather than catering to it all the more? All Ladakh needs is a bit of respite and control, which we feel might only be possible through controlling the number of tourists that may visit this destination per year, much like the Lakshwadeep Islands or the Rotang Pass. Also, a substantial effort in being sustainable and responsible on our part as tourists remains the need of the hour.

Ladakh needs to breathe and it needs lesser carbon footprint. So, let’s take a pledge as citizens of this world to help Ladakh survive rather than killing it.