VoxTalks With Director Praneeth Yaron: Of Life, Liberation & Sita On The Road..!

Posted on February 6, 2017 by Siddharth Naidu 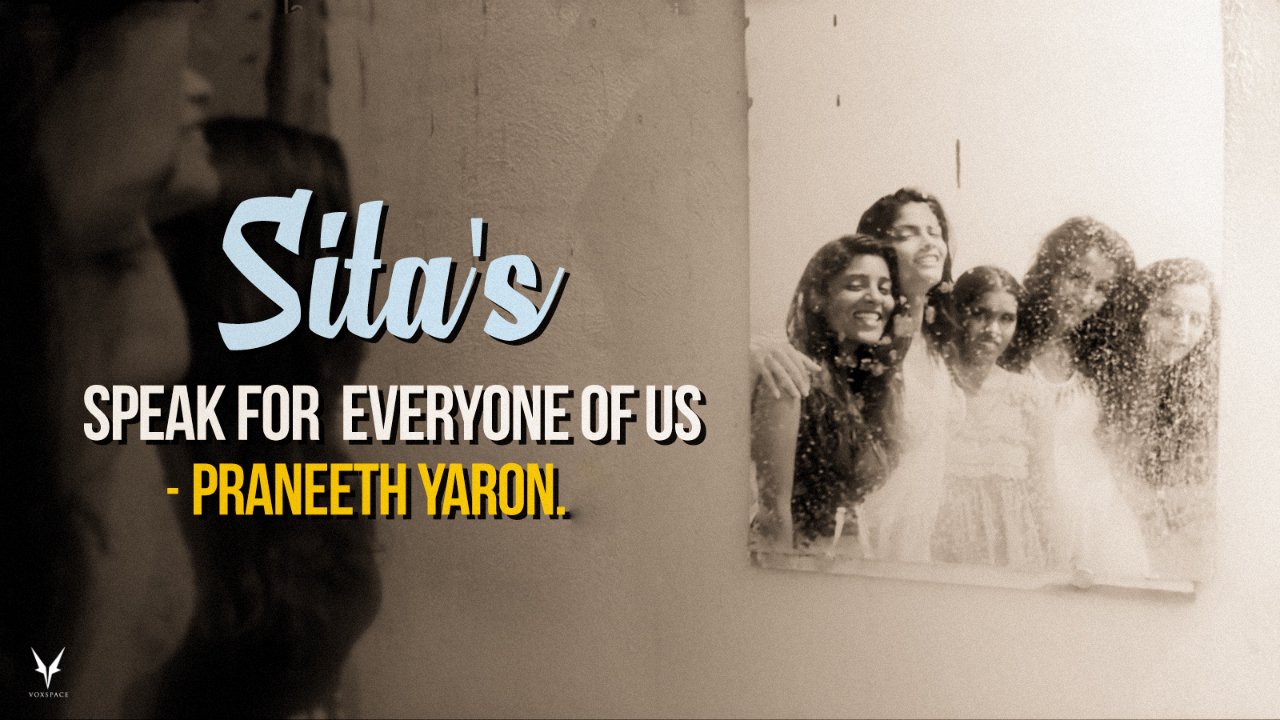 Most of the film critics we have today in the Telugu Industry, hail this decade as the golden period of experimental and original cinema. Movies which are never afraid to break the norm, and speak out their voice have started to define our movie-going culture. Who can forget the superlative success that movies like Anand, Kshanam, Happy Days, Pellichoopulu or the recent Jayammu Nischayammu Ra, met with. They went onto become succesful stories not only as commercial outings but also as critical studies of new age cinema. In that context, we have this year an Indie movie “Sita On The Road” by director Praneeth Yaron, which hopes to further extend the legacy. Voxspace had the opportunity to catch with Praneeth Yaron, and converse about this movie, which talks about feminism in its most liberal and poignant hue. Excerpts here…

Sita On The Road looks like an ode to being liberated from the societal bounds. We are curious as to what your definition is for the movie and particularly the title?

Social circumstances can never be avoided by anyone, be it a woman or a man. My movie majorly deals with opening up the inner person in them, who is lost or never discovered. People need to realize that there is always this voice inside them that constantly whispers to them, but more often than not, they completely ignore this voice. We never give it a thought or sit back to listen to it. But then, what is this voice? Our project, Sita on the road is titled on the base of the psychological crossroads that a person reaches in their life, where they finally listen to their inner calling. It is in this moment that it feels like your mind is on the road, on a journey, which has no destination. And you are just contemplating the basic question you hear; Who are you? And What do you want? The answer is freedom, out of any bounds which tie you down. The movie and the title, depict these thoughts. Could you walk us through the process of making this film – how did the idea strike you and how did you go about finding people to find it up.

The idea struck me, when I was just coming out of a phase of depression, which I had to gone through as my previous film “Manasu Gathi Inthey ” got stalled after shooting almost 50% of it basing on various reasons, but primarily financial issues.  To explain it, Anand Ranga (The Director Of Film “Oye” ) was producing a film and the team were supposed to go to Ladakh for a song’s shoot. I always had Ladakh in mind, wishing to visit it someday. I always thought of writing a story and shooting something when the team arrived at Ladakh. However, for some reason, I could not make it. However, later on my sister, planned my birthday in Ladakh along with few of her friends. That’s when I thought that I should just shoot a film with a DSLR in hand, with my sister and her friends as the characters in the film along the journey to Ladakh. I weaved a story based on these simple things of life that we miss in our usual lives. Then later on, even my birthday program too got cancelled. But the idea of a travel film remained with me. I started thinking about the story, and that’s how ‘Sita On The Road’ started. I went through hundreds of profiles and took auditions before finalising each character. I needed natural faces that went on to suit the character. And that’s how we brought on board, Kalpika Ganesh, Gayatri Gupta, Khatera Hakimi, Nesa Farhadi, and Uma Lingaiah. Our Sita’s for the project. Everyone did a great job in the film. I always knew what I wanted from them. I just needed the perfect person for the role. This movie as we can imply from the trailer is essentially bring driven by the actors in it. Therefore, the obvious question here is, what was the casting process like. And did you have to change anyone during the shoot for any reason perhaps?

Half of the answer is in the above question itself. Yes initially there were changes but then it was purely to ensure the smoother flow of the film. At any cost, I never compromised on the content and quality of the film.

Sita On The Road right from the onset looks to celebrate the extensive ideologies of feminism. Was it something you voluntarily wanted to project or was it just part of the bigger picture. Comment.

I basically treat this film as an expression of freedom, that’s the bigger picture and the smaller picture too. Yes, feminism strikes hard in the initial impressions, because I’ve chosen women to play the leads and drive the movie. I definitely and voluntarily wanted to urge to Telugu film industry to stop objectifying women. I absolutely hate that part of the movies in Telugu. I understand that the reason they give out is for entertainment purposes. Well then, I have my own way of entertaining audience through the same “women”. It’s time to make some sensible movies and perhaps pass on some goodness to the coming generations, and a responsibility to value women equally and absolutely. We have been tuned to treat a woman in a certain way because of the so-called Westernisation. But then, somewhere, we need to draw a line. The term Woman needs to be intercepted in a whole different way than what we intend it to be. We need to ward off the uncultured tendencies from our mind. And yes, this movie is proud to claim a forthcoming change.

To a layman, Assuming he doesn’t know anything about the movie, how would explain the movie to him? Also, where do you think the movie has the appeal to common movie goers?

Be it a layman or a superman, we all have lost the charm in the crazy never ending race of life to survive and succeed.  Sita On The Road, tries to rediscover that lost charm in your life, values and emotions that are there inside you but never ever heard. This film takes you back to the “Earth”, the beautiful nature which has all the cures for your lost lives. Lastly, what do you hope to advice with Sita On The Road? What does the future look like? And who are the people that you’d like to thank for helping you bring out the inspirational movies it is bound to become?

The whole world has helped me come out with Sita On The Road. I haven’t really done anything new. I just picked up what’s happening in the society, filtered them through my own ideologies and what came out is “Sita On The Road”. The feature is an extension of my personality. Well, the future looks definitely bright because all I am doing is taking things from the society we are living in and giving back to the society adding my vision to it. Of course, it’s a continuous process and as long as I react to the world, I will keep making movies. So, that was Praneeth Yaron, speaking his mind on his upcoming project and his overall passion towards bringing a change towards the society. Our sincere wishes with the team of Sita On The Road, and we hope it ushers Telugu cinema to a newer height. Do check it out at a theatre near you as it comes out soon.

All Images Used In The Article Are By The Usage Rights From Praneeth Yaron In Regards To Sita On The Road.