VoxTalks With Divakar Mani : Finding The Inherent Harmony In Moving Images On Celluloid 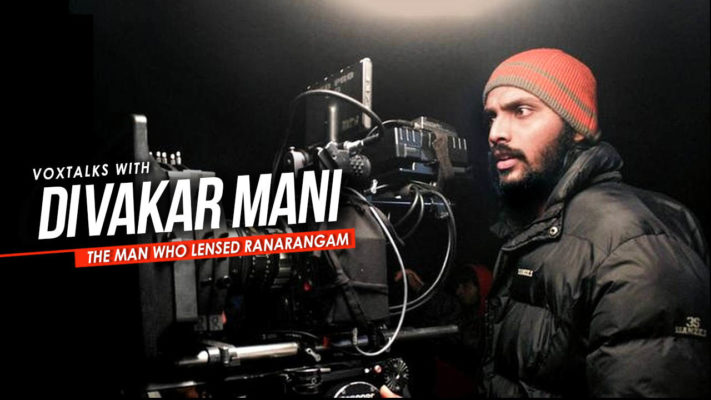 A cinematography gold medallist from the Film Institute of Chennai, Divakar’s assisted ace cinematographer Santosh Sivan for 6 years. Since then he’s been a cinematographer for the Bollywood film Jugni, a Malayalam film directed by Priyadarshan, Ceylon directed by Santosh Sivan and a Telugu film Keshava directed by Sudheer Varma. Divakar has simultaneously led a very eventful life, working on over 100 advertisements, numerous documentaries, and being a celebrated video journalist at NDTV for 7 years. A documentary named ‘Killing Fields’ went on to earn Divakar the Common Wealth Broadcast Asia Award, gaining him a fellowship to study digital film making in the New York Academy. It’s no surprise then that he’s travelled to 39 countries through the course of his career. Currently Divakar Mani, is enjoying acclaim for his fifth movie project ‘Ranarangam’. We got talking to the talented cinematographer to bring to you his story. The excerpts of it follow…

As I was reading about you, I realized that you have worked in various formats from documentaries to ads to film to TV. How does your work vary from format to format?

I started my carrier as a Video Journalist in NDTV in Delhi. For almost about 7 years, I covered some of the major events happened in India at that time. Be it the Tsunami outbreak, or the multiple train Bomb blasts in Bombay, Naxal civil war in Chhattisgarh, the earthquake in Srinagar etc etc. Shooting news and documentary always keeps you on the edge. You need to be alert and never miss a moment since you are documenting real events and human lives. Features Films and AD films are bit more planned and fictionalized. One can control the time frame and re-create what we really want to show. I thoroughly enjoy shooting all formats. Everything has its own challenges.

The two timelines in the film Ranarangam, have very different looks. The 90’s are full of color and have a gritty look, while the present looks subdued and slick. What was the thought process behind the choice and how did you achieve it?

When I read the script first, the narrative went back from past to present almost in every reel. The screenplay structure was in a way that, we need to do something distinctive to make the audience understand what time frame the story is in. So I decided to treat the visual approach differently for the both the eras. One that happens in the 90’s has very realistic tones, high contrast and very subtle camera movements, whereas the present (Spain) portions was shot very low contrast and had wide huge frames. The color palette was also created separately for both the eras to suit the mood. The costume department and the art team also helped me a great extent to achieve the final visual quality.

How does your collaboration with your directors work, regarding the choices made for the film?

For me the script is most important. If I feel I can contribute to the visual story telling, that’s when I take up a project. I want to do different genres, so that the visual interpretation can also be different for each film. Like for example, I don’t want to take up another gangster film, right after Ranarangam. You don’t want to eat the same meal all three times a day. The Directors becomes an integral part in executing what you have in your mind in terms of the visuals. Luckily, I have worked with the most comfortable set of directors who understand me and gave me the liberty to work in my own style. I still remember Priyadashan Sir, for who I shot my second Malayalam movie, gave me the utmost liberty and comfort, even though he has worked with almost all the top cinematographers of the country. It was Priyan Sir’s 90th film and mine 2nd. He was so happy with the output of the film, that we have been collaborating since then on various projects.

I have always thought of asking a cinematographer this question. Once you shoot the film, you kind of lose control over the film as it goes into post. Does that affect your work in any way?

It does get difficult and emotional to let go off your footage, especially when you see it getting cut on the edit table, after spending so much time creating the visuals. Some of the nice shots doesn’t even make it to the final cut. But finally its the director’s call and what the story flow demands. We can’t keep our sentiments and personal shot likings to the final film. It is like sending your child to first day of school, you do get attached and concerned, but its only for the betterment.

I read that you worked under the great Santosh Sivan. Are there any lessons that you learned from him that you follow?

Everything and everyday. He has been my guide and mentor not only on cinematography, but also on life issues. Santosh Sir has this positive aura and energy that’s so difficult not to get influenced. I was lucky to work with him for over 6 years on 5 films. It was some of the best days of my life. His commitment to a project, discipline and his approach to the visual style is something I try to apply on my work too.

What is your opinion on the recent rise in web content and how does it affect your work?

It’s very welcoming. The entire world is moved into digital and into small screen formats. OTT Platforms like Netflix and Amazon has opened people’s mind to write interesting contents. There is space for everyone to experiment and come up with ideas which can be totally out of the box. I recently shot for “Lust Stories” for Netflix. I approach all work with the same effort and interest. The budgets and timelines vary from format to format, so we work according to its needs.

What is the most important aspect of your job on set and in pre-production?

In Pre-production stage we decide everything that is going to happen while filming. Like costumes, make-up looks, color tones, art properties. The director and I work on a detailed script breakdown and shot division for each scene. So, when we go on floors, it’s easier to execute what we planned. Of course, there will be some changes and some positive magic happens on sets, for that one needs to be prepared. On sets, it is mostly executing of what we had planned, and also a lot of man management. Working with your lighting and grip team to attain the desired mood and shot for the scene is the practical challenge that happens on the set. Also, we always run against time and nature. So keeping all those things in mind, we set out on a positive note to achieve what we intended to.

How closely do you work with your art director and costume designer to achieve your desired look?

Art and Costumes become the primary asset in visual story telling. Anything and everything I compose in the frame needs to have a detailed work of art and costume department. I work very closely with both the teams, mostly pre-deciding what look we are going to go with, what color palette we are sticking to and what finally is going to come through the DI process. I usually sit through on a detailed session in pre-production stage with art and costume department, so that we lock everything down before we go on floors with actual filming. It makes everyone’s life easier and everybody is on the same page to achieve what we decide to, for the film.

Finally, we would like you to give our readers five scenes or shots that have really inspired you…

Every shot and scene in the film “Iruvar”, shot by my guru Santosh Sivan. I personally consider his work on this film like a bible in Cinematography. Any aspiring Cinematography student should watch this film to understand what depth they have gone to achieve that precision in making of that film.

The Train robbery scene in “Assasination of Jesse James”, shot by the genius Roger Deakins. I have always admired his work and we tried to replicate this particular scene in Ranaragam too, not as a copy, but an ode and inspiration of his work.

The death of the dog scene in “Amores Perros” shot by Rodrigo Prieto, and directed by Alejandro Gonzalez Inarittu.

The apple rolling shot and the scene after, from “Once upon a time in Anatolia” by Nuri Bilge Ceylan,

The climax scene from “The wild pear tree”.

Almost all ‘mise en scenes‘ from “The Stalker” by Andrei Tarkovsky

Also special mentions of works that have really inspired me –

“In the mood for love” by Wong Kar Wai,

‘A Separation” by Asghar Farhadi,

“There will be blood” by Paul Thomas Anderson,

Thus, Divakar Mani brings his worldview of things into creating movies full of life and vibrancy. We wish him all the best and until next time.!