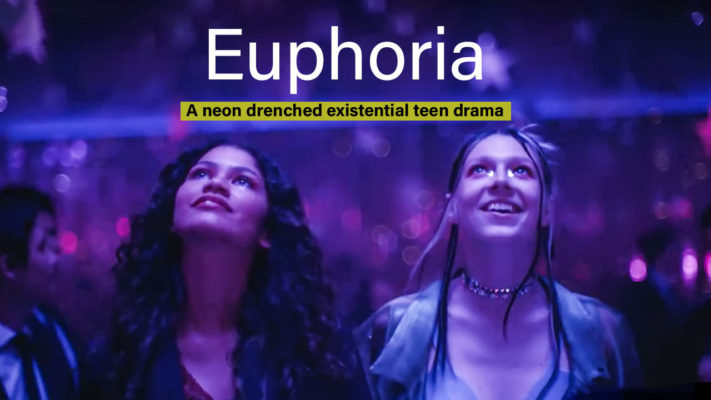 I have always believed that art has a huge impact on culture in general. In the same way, the culture always leaves its mark on the art that is produced. In that way, there are films that absolutely capture a time and place perfectly, take Easy Rider for the laid-back hippie culture of the ’60s, Early Spielberg for the overly conservative small-town paranoia ’80s and Big Lebowski for the aimlessness of the ’90s. These films somehow manage to encapsulate a feeling of the time on celluloid. Euphoria manages to do that about now.

From The Eyes Of A Broken Girl

Euphoria follows Rue, a drug addict daughter of a single mother, who is just out of rehab. We see the world through her eyes as she navigates the insane world of her high school filled with extremely complicated, but recognizable characters. In this journey, she meets a bunch of people who push and her pull her away from her constant self-destructive nature. The show is narrated by her character as she gives us her take on everything and everyone. The closer we get to the end of the show, the more we feel like Rue in every way.

Let’s talk about the structure of the show. The way the show is structured is as inventive as the show itself. Every episode opens with a cold open that gives a brief but informative montage with Rue’s voiceover omniscient-ly explaining a character’s backstory.  Then we have these time jumps between each episode, where each episode is built around an important event like the carnival or the school dance. The missing time is explained to us with well-timed and expositional flashbacks building up to a final moment revealing something we could have never expected form a character we think we know. It might sound complicated as I explain it, but it feels very organic and almost exciting to follow.

A Masterclass In Casting

The casting in the show is one of the USP’s of the show. It is filled with young actors who are all uniformly brilliant. The casting of Zendaya is a stroke of genius. She perfectly encapsulates this broken-down drug addict who needs help but is too strong to ask for it. There is also Maddy and Cassie, who are both beautiful actresses stuck in abusive relationships, they don’t know how to get out of. Then there is Jacob Elordi and Algae Smith who play different versions of toxic male abusive characters. There have never been two characters whom I have hated as much but also wanted to give them a hug and tell them its ok. Finally, two of my favorite characters who happen to be absolutely first-timers. Angus Cloud who plays the kind-hearted drug dealer Fezco and Hunter Schaffer who plays the super impulsive transgender character who dresses like an anime character called Jules. Every casting director needs to watch this show because all your future superstars are under one roof.

The Euphoria – Visuals To Match The Music

Coming to the technical aspects of the show. This show has to be the most beautifully composed and shot things I have ever seen. Most of the show is lit with this kind of red and purple hue, mostly covered in fog for the most part. Most of the shots are either close-ups or extreme wides. This creates a kind of dream-like atmosphere that at the same time pulls you close but keeps you at a distance. The show is also filled with virtuoso camera moves that you will keep scratching your head thinking how they could have pulled that off. Think of the rotating corridors in the first episode or the carnival long shot in the fourth. Finally, the thing that sealed the show as a classic to me was the soundtrack. It has this amazing eclectic mix of music from rock to Trap to EDM to PSY to Pop. Every song fits the situation perfectly and puts you perfectly in the mood for the scene to come.

This is a show that is an absolute must-watch. It has everything from a great story to relatable characters to mind-blowing visuals to the most perfect soundtrack that I have ever come across. Catch this on HotStar or HBO GO depending on your convenience. The show is for the lack of a better word, Euphoric.