VoxTalks With Vivek Athreya : The Maverick Telugu Director Who Is Bound To Change The Industry 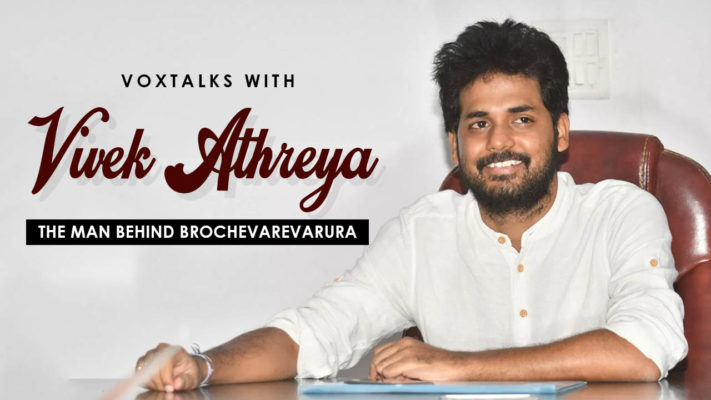 Vivek Athreya – The Film Maker Who Actually Believes In Stories

Vivek Athreya burst on to the Telugu big screen with his brilliantly quirky and extremely endearing comedy about an indecisive man with Mental Madhilo. He then backed it up with another amazing film, this time a crime caper called Brochevarevarura. With his second film, he went bigger in every way – a bigger cast, bigger scale and more thematically dense. He still pulled it off with such ease and effortlessness that it became evident that we had an undeniable talent that has a lot more to offer in the near future. So, we sat down to have chat with this talented film-maker to pick his brain about some of his work.

First of all, congratulations on the enormous success of Brochevarevarura. We at VoxSpace absolutely loved it.

From Metal Madhilo to Brochevarevarura, there has been a huge difference in the budget, cast, and scale. It’s a lot bigger. Did your approach to the film change in any way?

No.. No.. The thing is – The budget and the cast purely depends on the story. If you take Mental Madhilo, the budget we got was lesser than what we wanted. I don’t really complaint now, it’s just that we couldn’t procure that. So, we had to make do with what we got. When we got to Brochevaruevarura, with the kind of ensemble I put together, we obviously needed a bigger budget but never more than what the story demanded.

But, whatever the budget might be the approach still remains the same. It’s just that the budget allowed us to have a lot more prep time for rehearsal and pre-production.

You have put together an amazing ensemble cast amazing new-age actors in your film. Were there any challenges faced due to that?

Because of the ensemble, we could not shoot it continuously due to the scheduling issues. So, we had to stretch the 55-60 days of shoot over 7-8 months. This also helped because it gave the actors to stay in the characters for a longer period of time, so much so that by the end of it they were those characters.

One of the beautiful things about your dialogue is the amazing wordplay that is present throughout the film. How did you develop the kind of vocabulary needed for something like that?

I am not sure actually, most of my higher education happened in Tamil Nadu. Probably it came from my family and how we speak, I can’t point at anything specific actually.

What was the basic idea for Brochevarevarura as you began writing it?

The basic superficial idea for the film, at a script level, was that I wanted to see what happens when a fictional story and a real story are happening simultaneously, and at some point they converge to reveal that they were real this whole time. I clearly had the interval in my mind and I built the rest of it around that. Mithra’s story was actually inspired by an anecdote that I heard somewhere and I believed that it could be the key for the whole movie. As far as the themes, I would like to leave that to the viewer’s imagination and interpretation.

You have been getting amazing response to your film, what has been your favorite compliment you have got so far?

A lot of people called after the release of the film to compliment it, but if you keep that aside – There was this one particular girl who called me and told about an incident that happened to her when she was 12 regarding the harassment that she had to face. She said that she felt like it gave her a voice that she never had before. She said that most films she’d seen don’t really talk about things like sexual harassment with such sensitivity and tact. She then proceeded to thank me for it. That probably is the greatest compliment I can get, because it felt like it came from very deep and personal space. That makes me feel proud because we all tell stories hoping that it actually affects people in a positive and constructive manner.

What is your process with your actors? How hands-on are you with your direction?

From script to shoot, we prep a lot and we make the actors a part of that process throughout. During this process, I put each of them on a particular meter. By the time we get to the set, the actors know everything from end to end which does not allow for a lot of on set improv. Most of the time we are just striving to translate what’s on paper to the screen. I also give them a very detailed character graph, which the actor and the team can refer to. Sometimes, if I over-look it in anyway, my team does come up to me to correct me.

Relating the last answer? How democratic is your set? In the sense do you take advice or direction from your crew?

I am open to any suggestions, you kind of, have to be. For example, we were discussing the lyrics for the song Vagaladi. There was this art assistant who has been listening to us for some time, who suddenly came up to us suggesting an interesting idea. Whether the idea is good or bad, he just wanted to help us out in his own way. If I take it or not is a secondary concern, but I make sure to listen to it. When you listen to someone’s suggestion, it allows them to take ownership of the film and when someone thinks of the film as their own, they put their 100 percent into it. At the end of the day, the movie is bigger than any of us and a director needs to be able to keep his ego aside for the betterment of the film. So, any suggestions are welcome on my set as long it is not hampering the shoot overall.

There is a structural similarity in your two films that I observed. It feels like both the films were built around the interval point. Was that a deliberate choice?

Its very simple man, I just want the audience to rush back to the theater to find out what happens next. Due to the screening system that we have, the interval is a mandatory kind of thing. We don’t have the luxury to just hold their attention continuously for the whole run-time of the film. So, I build my stories in a way that when they go out (during the interval), they are still thinking about the film and anticipating what is going to happen next.

So, what are working on next?

I actually want to do shift genres. Probably my next film will be a very serious thriller. I don’t really want to do another comedy caper type thing.

Finally, could you tell our audience five film-makers who have been your biggest influences?

Thus, Vivek puts out his thoughts, being as precise in his answers as he his in his screenplay. We wish him all the very best, as he symbolizes the new age storytelling and offers a huge promise for the coming generations of creators. Until next time then..!!