Posted on October 24, 2019 by Srividya Vanamamalai 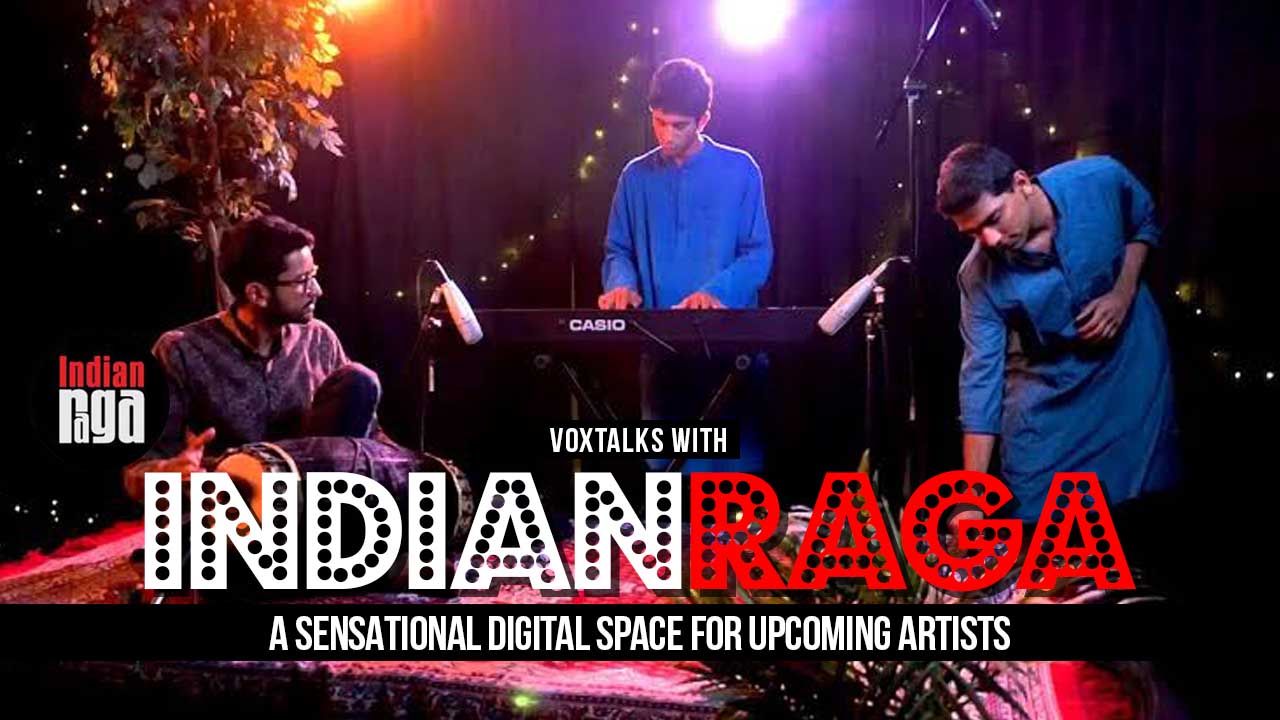 IndianRaga: A Global Platform For Dancers And Musicians To Showcase Their Talent

IndianRaga is a collaborative initiative, founded by Sriram Emani, a graduate from the Massachusetts Institute of Technology (MIT), Boston. It is also, “arts education start-up” which provides a platform for upcoming artists to showcase their talent in this digital age. Started In 2013, IndianRaga focuses on providing exposure through a mentor-student relationship with people interested in the performing arts. In a timeline of four years, almost 5000 artists have found over 100 million viewers. The IndianRaga movement has reconceptualized Indian classical music into the modern context and created a distinctive taste amongst music enthusiasts.  We, at Voxspace, got to interact with Sriram Emani on how IndianRaga, this unique yet authentic music company began, and how you can apply or be a part of their programs they offer.

How did the IndianRaga, the collaborative initiative start? What’s the story there? Why Carnatic music specifically?

IndianRaga as an idea started formulating in my mind at the age of 14 when I realized that I was the only one in my class in Mumbai training in Carnatic music. I wondered even then how we could make this beautiful art form more exciting to the younger generation because it won’t survive if they don’t take it on willingly.

A little more than a decade later, IndianRaga as a venture started with me writing a business plan for my final assignment in the Digital Innovations course at the MIT Media Lab. MIT’s vibrant entrepreneurial ecosystem inspired me to launch the company, and we also ended up winning the MIT IDEAS Global Challenge (Community Choice Award) and the US Creative Business Cup which gave us some more momentum.

I tested out our model at the first-ever IndianRaga Fellowship in 2013 in New York where a bunch of fantastic musicians came together to collaborate under our mentorship, and we realized this was a much-needed, meaningful offering in the space of Indian performing arts. Today we have over 200 Fellows in our network and thousands of Raga Labs participants across 40 cities around the world who have featured in more than 700 videos with us.

We are not limited to Carnatic music at all. If you see our social media channels you will see all classical and semi-classical music as well as dance forms. This includes Hindustani classical, semi-classical and film, Bharatanatyam, Kathak, Kuchipudi, Mohiniattam, Odissi, folk, contemporary styles.

What is the appreciation and criticism you receive for your cover songs?

Almost everyone across the board right from maestros to audiences to music teachers loves our Raga Mix of shape Of You. There has been a tremendous appreciation for infusing Carnatic elements in an elegant and innovative fashion into a much-loved pop song, making it exciting to young audiences globally. Most parents tell us that they use Shape Of You Raga Mix to get their kids excited about Carnatic music, and the family listens to it together on loop at home or while driving. Shape Of You Raga Mix was recently invited to open for Prime Minister Narendra Modi and President Donald Trump at the Howdy Modi event in Houston to over 50,000-strong audience, as an example of how cultures can come together in meaningful ways. As we performed that piece live, the chants and cheering reverberating from all corners of the audience were a testament to how popular and well-loved this piece has become.

We went on to do other covers like Piya Se Naina – DeshThillana, SwallaJathi Mix, Mi Gente Carnatic Mix to great appreciation and viewership. Most live concert invitations that we get today are for these pieces.

There are of course some experiments that work really well, and some that do not. The ones that didn’t click much with the audience have not had high viewership, and that is ok because it is the nature of innovation that some attempts work and some don’t. However, audiences, in general, appreciate how we try to do justice to both genres, and our artists, as well as audiences, enjoy this unique offering that we bring. There are of course some who do not care much for experimentation in classical arts and we respect their preferences, but a vast segment of the youth has given us great feedback on some of our work in this direction and we are grateful for their appreciation.

How do you pick a particular song for a cover?

We look at the musicality of the original song, and whether the melody has interesting spaces to infuse classical elements. Sometimes songs might have an interesting melody but not resemble any specific ragas in our system, so it may sound a bit forced and lackluster to do a classical cover of it.

The biggest factor though is the popularity of the song. If the song is not a viral hit there really isn’t much interest among audiences to see it redone as a classical cover. Which is why we wait for runaway hits like Shape Of You, Swalla to do covers. We are looking into doing this for some classic songs too, let’s see how that attempt bears fruit!

Are there any original compositions you are currently working on?

IndianRaga Fellows Sruthi Dhulipala and Shruthi Iyer recently wrote original lyrics in Hindi to the hit song Senorita by Shawn Mendes and Camilla Cabello. We are working on it as we speak and hoping to release it soon. They are also working on another original that brings in some element of rap together with folk, raising the question of why folk music doesn’t get as much attention. Do stay tuned for that too. IndianRaga Fellow Apoorvaa Deshpande who shot to critical acclaim with her IndianRaga pieces Swar Saadhana and Padhaaro Mhare Des will also be working on some of her own lyrics at the upcoming Chicago Fellowship to add a new dimension to our classical repertoire.

We are very keen on adding more original music to our repertoire at IndianRaga. Writing lyrics and composing tunes is an advanced skill and we take it very seriously. The theme and the musicality have to be well thought out and refined before it gets produced.

What is the ideation process like behind each audio-visual production?

We have a database of ideas that we constantly keep adding to. We offer this as a resource at the Fellowship when new artists join us, and they contribute some of their own ideas as well. As teams form, we invite them to submit ideas that are fleshed out some more, including thoughts on why it is unique, what the dynamics of the piece would look like, and what the broad structure and line-up would be. Once our panel approves it, teams start jamming remotely and put together rough drafts using basic audio editing tools. This helps everyone get an idea of how it is shaping up, and for our panel to give some more feedback on how to refine it further.

Having said that, just like it is not possible to visualize the exact final movie based on the script, even here drafts that are approved might not shape up as well in their final form. That is a risk that is inherent to a complex creative process. However, the various rounds of refinement and the final rehearsals before they produce the video at Fellowship Week helps in making it as tight and engaging as possible. Teams also put together the screenplay for the video, plan costumes, and work on body language and performance styling. So, a lot goes into each video!

What is it you usually look in a collaborator? Is there like a particular criterion while you choose an artist?

IndianRaga mainly works with artists who apply to join our collaborations through the IndianRaga Fellowship process. This allows us to be transparent about our process, and make it a merit-based system. We look mainly for deep grounding and rigor in the genre that they are trained in, but at the same time also for a spark of creativity and innovation to push boundaries and try new interesting approaches. So, in some ways its two widely divergent skills but when you find the right blend of both we see the kind of ground-breaking work that some of our senior Fellows like Vinod Krishnan, Mahesh Raghavan, Kartik Raman have produced.

We have recently collaborated with established artists like Ramakrishnan Murthy and are going to be releasing some of these very soon. In these collaborations, we look to partner with someone who is open to ideas and willing to work with us to refine the piece until it becomes its best possible version.

What are your future projects? And long-term plans or Indian Raga?

We are about to launch a revised model for Raga Labs, where teams across the world can join the creative collaborations more easily. Imagine having a producer or a choreographer who can help your band of 4-5 friends put together that dream project together easily! You can work with a Mahesh Raghavan, Vinod Krishnan or Swathi Jaisankar and Sophia Salingaros to add that zing to your collaboration. Our professional team can then help you do the audio and video production, and release it on our social media channels for Raga Labs. Especially as YouTube and Facebook become increasingly crowded with lots of content struggling to get noticed, our established audience base is great for anyone with interesting new work to get featured. We have also made it easier for those who already have the ability to produce videos but only need a platform to get showcased, to join us!

We are also embarking on several live tours soon for both music and dance. Recently we performed in the United Nations General Assembly Hall making us the first-ever Bharatanatyam troupe and one of a select few Carnatic music groups to perform in that prestigious venue. We also performed to a packed audience in Little Rock, Arkansas for AIM ForSeva which was received very well. Soon we will be announcing many more live shows in India, North America as well as Europe. We are also looking to expand into genres beyond our core set so we can include many diverse artists and bring them all together to explore new ground.

IndianRaga is also setting up city chapters that act like mini franchises. We have them running currently in London, Singapore, and Malaysia, and are looking to add many more cities in India, North America, Australia, Middle East and Europe soon.

What has the journey been like so far? Will you be performing in India anytime soon?

The journey has been very exciting and humbling. We are so grateful to the many thousands of artists and millions of audiences who have helped us get to this stage, and we are looking forward to growing onward and upward from here with their solid support. Representing Indian performing arts at iconic stages like the United Nations, Lincoln Center, TEDx, Howdy Modi, INS Shivaji, World Government Summit has been an honour, and we hope to showcase the beauty of our traditions to global audiences in many more cities.

We will be performing in India this December and January, and audiences can tune in for schedule and updates at indianraga.com or on our Insta/Twitter/Facebook/YouTube handles. You can also email info@indianraga.com if you have any questions!

We wish them all the very best for their future endeavours.

Related posts:
VoxTalks With Raj B Shetty : An Artist That Prioritizes Authenticity Over Style
This Sharp Observation Of GOT Season 10 Finale Debunks The "Varys Teleportation" Theory..!!
"Voyage Of Time" Trailer Is Here : Terrence Malick Embarks On His Most Ambitious Journey Ever