[VoxSpace Selects] Review Of Bigil : A Tediously Long Mass Entertainer That Tries To Be Progressive 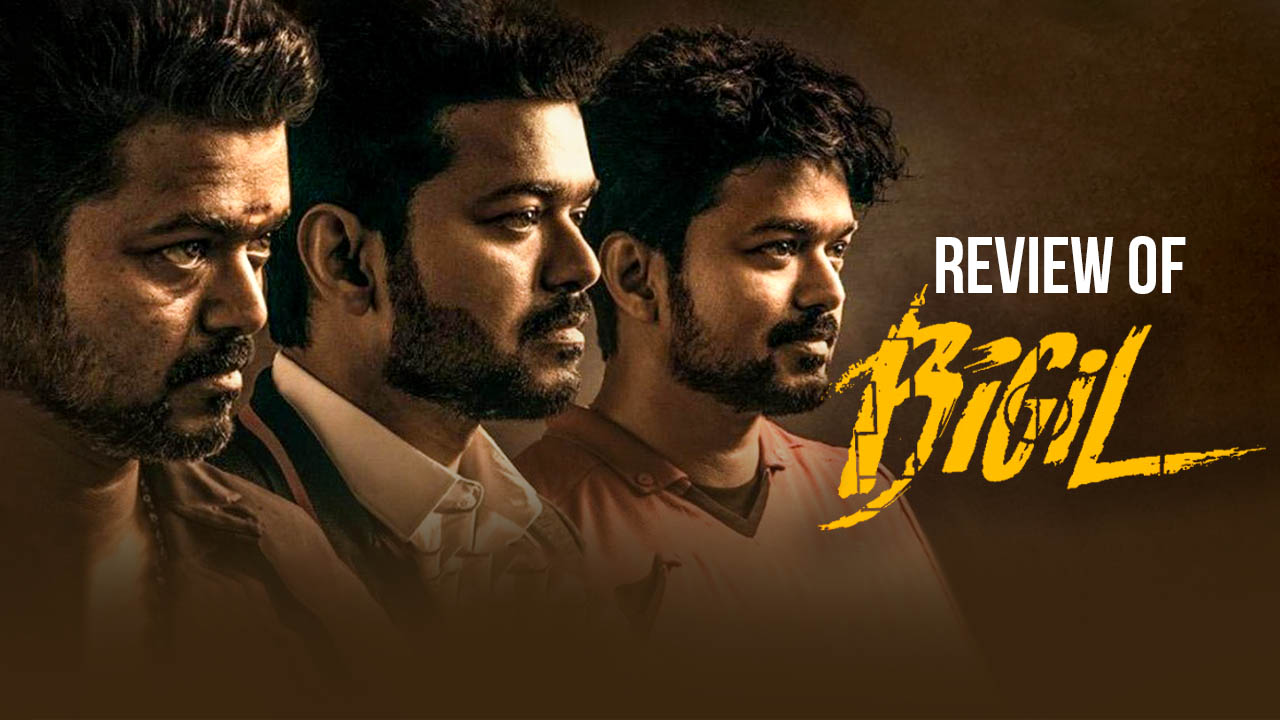 This Diwali, do not hesitate to witness Thalapathy Vijay’s stardom in the star-studded film, Bigil. Starring Vijay and Nayathara in lead roles, supported strongly by Vivek, Yogi Babu and Jackie Shroff, Bigil is a commercial family action-sports-drama that fulfills every Vijay fan’s expectations. Atlee, ends the Vijay trilogy (if you can call it that) with a bang. Bigil hits the right notes (only  in the second half) almost, using those mass elevation scenes, expensive production design and Vijay’s impeccable performance. The story revolves around a gangster, Rayappan, and his son, Michael, a football player and a women’s state football team who are in pursuit of their dreams. The film touches various themes like women empowerment, inclusivity and secularism, ideologies that take precedence over the story and gradually, it becomes a political pathway for the star’s personality. Diwali being a prominent cultural festival, the dialogues, cultural context and production design are used as symbolic references, thus, elevating the actor’s value to a “Verithanam” level.

The subtle devices like props, supporting aids to the characters and songs indicate the philosophies of secularism, gender and cultural equality and being inclusive of all. Atlee infuses these themes with the signature tropes of Vijay – action, romance, comedy, emotional drama and heroic personality, which make the perfect recipe for a commercial family drama. The various “Verithanam Vijay” moments give you goosebumps, his emotions appealing to your sympathetic core and his eccentric self keeps you entertained throughout. The story takes different detours in the first half which do not really push it forward, and it is Interval by the time the take-off actually happens. In various scenes, unnecessary cutaway shots and repetitive closeups pop up which slow down the pace or disrupt the emotional gravity of the scene. There were certain themes and elements that have been overtly explained, in monologues and losing its intention in the process.

The film opens with college students revolting against demolition and Michael (played by Vijay) is introduced as a saviour-don like character. Vijay is introduced in the typical mass fashion, with tight close-ups of his eyes, lips and for a change, football jersey. You hope, maybe we’ll be getting into this part of the story quickly and that’s when the film surprises you. Giving a Godfather-esque backstory to Michael AKA Bigil, the film tries to establish the character’s (and Vijay’s) ideologies strongly. Writer-Director Atlee infuses every commercial element of Vijay’s on-screen and off-screen personality- witty comical dialogues, political and philosophical statements, peppy and stylish dance moves, adrenaline pumped action sequences and messiah-godlike hero. The problem begins when this gets tiring and overwhelming, even for a Vijay fan, making you impatient with the plotline progressing at a snail’s pace. By the time you walk out of first half, it is relieving and you end up craving more for Vijay, and not the story.

Before the song, “Verithanam” completely takes off, Rahman drops it like mirchi bombs during the introduction and mass elevation moments, teasing every Vijay fan. Set in North Madras-like set and reddish-hue lighting, Vijay stands out like a stylish icon in a middle-class atmosphere. After years of countless Vijay’s introduction songs, somewhere deep down, I was disappointed with Verithanam’s choreography, underutilising Vijay’s grace and groove, one of those moments where you miss the Vijay- Prabhudeva combination. The song is the celebration of a star, a youthful iconic figure, the hero you look to in desperate times and most importantly, the human who tries to be fair and inclusive.

The Characters And The Arcs…

The gangster- Rayappan looks interesting on paper but the translation to screen does not happen and is flat, even with “Vijay’s voice modulation” and contact lenses. I hope Vijay picks up much more meatier roles in the future. Michael AKA Bigil is all the movie is about and that is a drawback because even the villain or villains, it’s so confusing with Jackie Shroff and Daniel Balaji popping up occasionally. When the film get’s very hero-centric and revolves around a single character, the empowering character becomes bigger than the story, which can fizz out quickly in a 3 hour film.
Nayanthara, who plays Angel Asirvatham is a hilarious character that loses its potential in a haphazard manner. Throughout the film, her accent is not very authentic and believable and you wish they hadn’t attempted to blend in that fake accent from Deepa Venkat (Dubbing artist for Nayanthara). Vijay and Nayanthara’s love sequences or the “love track” as they say, just does not fuse well with the story’s intention and is more like a detour, you half-heartedly enjoy. Talking about the women in the film, rightfully speaking, the football team players have done a commendable job and there’s a certain context and substance to their characters, strongly backed by Vijay’s powerful presence and performance. The film gets long when it tries to create the sense of inclusivity of the various characters which after a point, as an audience gets exhausting to invest in.  Women empowerment is the underlying thread throughout the second half of the film, with Vijay being the central axis. In Bigil, Atlee tries to strike the balance between the star’s personality and progressive ideologies. The film is pushed like a tribute to women, which it is definitely, but the story somehow loses its grounding when various themes start to seep in, for the sole purpose to elevate the star value.

The writing and editing departments are exactly where the film falls short of expectations. The North Madras language definitely has its own style and diction  of words and their interplay, which bring a comic and local flavour to the character’s world. The meta- humour and real-life references worked for me and some being very cleverly written and articulated. Vijay’s dialogue delivery gives the writing a soulful voice that creates a persuasive impact on the viewers. But, in many instances, the dialogues and gestures get exhaustively repetitive, for example, when Bigil or Michael asks his father to hug him (very frequently), another being when we cut to fight sequences when cutaways of another dialogue reference are included, despite it being implied already, the character’s dialogues during a football match.

More Of The Old, Less Of The New…

At various points, I had  déjà vu moments of sorts when there is the soundtrack of Azeem O Shehenshah from Jodhaa Akbar playing during a football match, the penalty shootout and locker room scene reminded me of Chak-de India and the Godfather/Thalaivaa moment when Bigil becomes the Don Michael. Atlee hid his inspirations well, unlike his other films and coated this masala entertainer with power-packed performances and hero-centric elements.

The creatively composed shots by cinematographer GK Vishnu loses it beauty and is side-tracked like an overused device, which is a real tragedy. The film could have easily reduced its runtime by 20 minutes and for a film with a 180-crore budget, the VFX was disappointingly of a low-standard. I don’t think even in an international match, the grass couldn’t have been that significantly green like the ones in Bigil. Certain dialogues work and have a powerful impact and some of the conversations are just pass-overs. Being one of the most star-studded films, Bigil undermines the talents of promising actors like Devadarshini, Rohini and especially, its heroine, Nayanthara. Cinematography by GK Vishnu is truly note-worthy and undoubtedly, the best till date in a Vijay’s film. They have a life of their own and the reddish tint gives a communist flavour to the movie. Some of the closeups and slow-motion shots are pathbreaking and unconventional in a commercial film. Some of the stunt sequences in the film are absolute awe-inspiring and “Verithanam” which keeps your adrenaline pumped.

Music by AR Rahman is not sensational, but definitely elevate Vijay’s presence, the emotional intensity and set the atmosphere in a neat manner. It is too simplistic and lacks freshness, something you don’t really expect from somebody as illustrious as AR Rahman. Unakaga feels out of place but is too melodious and soulful to ignore, Singapenney is impactful, which keeps your chest pumping with pride and Verithanam brings out the Vijay fan and kuthu (folk) dancer within you. Some rap portions play in the second half, which are go unnoticed due to the overpowering sound design.

Bigil is a thorough family drama, with minimal nuances, that is refreshing and inspiring in today’s scenario. When compared to the Tamizh films that have released this year, it is promising to witness this almost-progressive film by a star of magnanimous value. Atlee is constantly proving to be a director who is here to deliver commercially-viable star entertainers that can appeal to mass audiences across the world.