VoxTalks With Danish Renzu : An Artist Who Derives His Stories Straight From The Heart 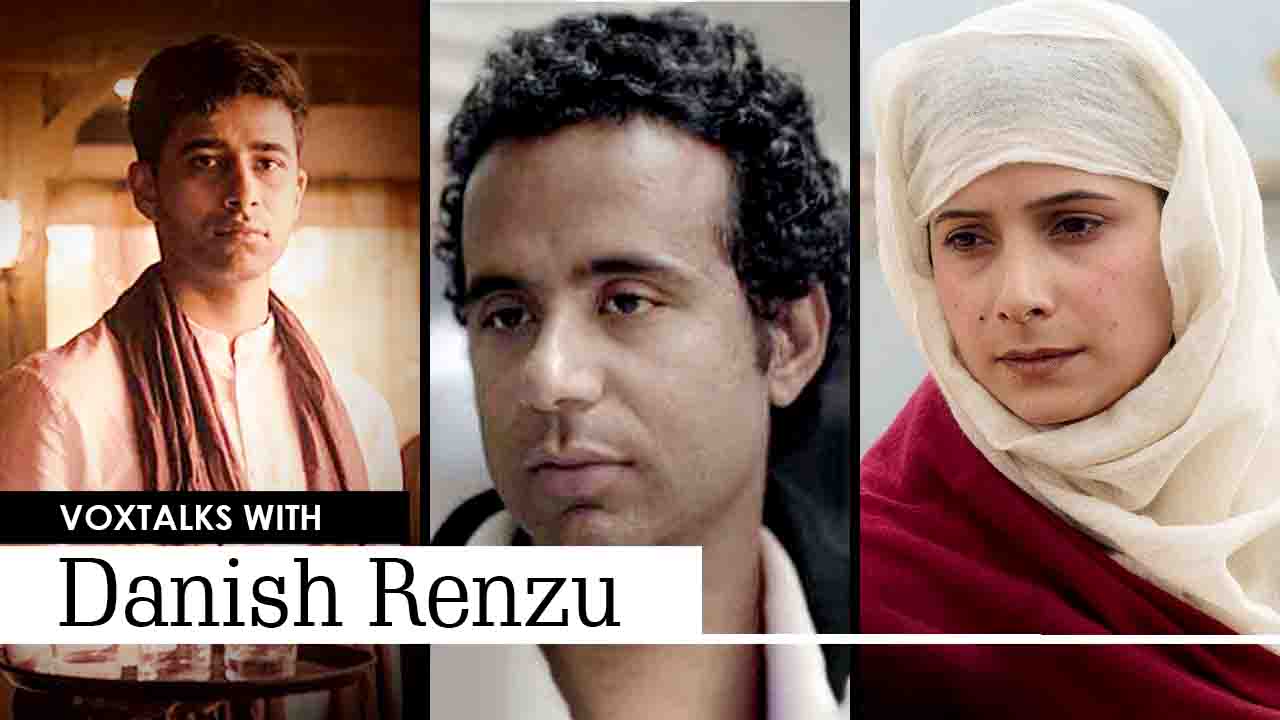 A Filmmaker Who Excels At Telling Human Stories About Real Conflicts

Danish Renzu is an internationally acclaimed filmmaker of Indian descent. He has previously made multiple short films that have excelled at prestigious film festivals around the world. He has previously made two feature films which both deal with very volatile subjects to heart-wrenchingly emotional effect. These films include Half Widow which deals with the Kashmir conflict and The Illegal which deals with immigration in America. As he explains himself, his films are very subjective and inspired by real experiences, hence they have a lot to say. We had the time to chat with him about his process and philosophy regarding filmmaking. Here are a few excerpts from that conversation:

Half Widow is one of the most intense and heartfelt films about the Kashmir conflict that I have ever seen. There have been a lot of films regarding that issue. What is it that you wanted to bring out by telling that story?

Thank you so much. Healing was the most important thing we wanted to showcase. How does one suffer the loss of their loved ones, the unending grief that it would cause and yet live life again? Kashmiris have gone through so much pain for decades, and it was important for me not only as a Kashmiri but also as a filmmaker too, to show a glimpse of hope in despair. My protagonist who loses her loved one finds a way to fight this injustice, by coming to terms with it and finds a way to heal her wounds through self-empowerment and growth. It is a very primal story at heart.

A lot of filmmakers have chosen to stay away from Kashmir on grounds of safety. What kind of challenges did you face while shooting in the valley? Also, do you intend to engage with Kashmir in your future cinematic endeavors?

Yes, one of the reasons to go back to Kashmir, was to somehow bring about an industry in Kashmir, a dying industry. I really hope that casting and hiring local crew will open doors to more and more films in the valley.  After Half Widow, all the actors and crew in the film were able to get a lot more work and were able to represent Kashmir on an international platform.  It was very clear that I only wanted to cast locals in the film to do justice to the characters and preserve authenticity.

Yes, I do plan on engaging as many Kashmiris as possible in any Kashmir or non-Kashmir based project I work on. We recently did a music video for Zee Music which featured a predominantly Kashmiri cast and crew. I think it’s not only a responsibility but the need of the hour to encourage talent in the valley. It is a revolution of its own and could bring about a change.

Your latest film, “The Illegal”, deals with an impoverished Indian man who immigrates to America and the problems he faces there. What made you want to tell this story now?

The Illegal is my take on an immigrant’s journey in the United States. American Dream that people dream of is not only about the glitz and glamor, but there is also a lot more to it. There are immigrants who have sacrificed their dreams to take care of their families back home. People who have lost their legal status can’t just be labeled as illegals, they too have a story to tell. This film celebrates one of those immigrants’ journeys who is an unsung hero and gives him a face. The Illegal is a film about the struggles and sacrifices immigrants make on their way towards the American dream. But it also empathizes with this plight and puts you in their shoes through my protagonist’s journey.

Your films have always had a serious political issue at the center. When you start with a new project. What comes first, the issue you want to talk about or the characters or the premise?

For both of my films, I have derived from my own personal experience. Being a Kashmiri, ‘Half Widow’ is the story of our mothers and sisters. It’s a story of Kashmir where I grew up. A childhood of shutdowns, disappearances, and violence.  I also went to States all by myself as an immigrant, lived the life of an international student, worked many jobs to pay off my bills. And through this journey met many more immigrants who weren’t able to make it, the ones who had to give up for the sake of their families. So a project always germinates from my own personal experiences.  The good thing is that they’re also politically relevant topics and that really adds on the authenticity.  But when I start any script, it is a character-driven narrative and the entire story is through the point of view of my protagonist. This way even when my characters are being affected by the political issues around them, one can easily connect with the characters as we see their lives affected by these circumstances once we’re emotionally involved in their journey.

Tell us a little bit about your experiences of working with great talent like Suraj Sharma, Adil Hussain, and Shwetha Tripathi in your new film, “The Illegal”.

I think I was just lucky to have been able to work with these talents. They’re immensely professional and naturally talented actors. Suraj is all about emotions, he speaks through his eyes. There is an emotional catharsis that he brings with him in any emotional scene. One connects with him right away.

Adil Hussain is a film school incarnate. There is so much he can portray through silence. He never fails a camera.  Shweta Tripathi is a beautiful human first, and that reflects right away in anything she does. Even though we shot only for 3 days, she brings so much to this film.  I loved her in Masaan, and we met at one of the premieres in Chicago, and I knew then that I wanted to work with her. Shweta and Suraj together are a treat to watch. You have developed a reputation for being a filmmaker-driven by realism and socio-political ideas. Are you open to working in Bollywood on mainstream projects, if an opportunity comes by?

I love films that somehow bring documentary and fiction forms of storytelling together. I can’t do anything that doesn’t seem real to me.  My characters have to be believable, relatable and engaging. There are some great mainstream Bollywood films like ‘Kapoor & Sons’, ‘Dangal’, even the latest ‘Andhadhun’ that I thoroughly enjoyed and thought had entertainment and content coming together. So I am definitely open to good content-driven stories with great characters.

We heard that you said, “We cannot just call someone ‘illegal’, Everybody has a story.” while referring to your new film. Could you expand on that a little?

Yes, the film through my protagonist Hassan, gives a face to the illegal immigrants and showcases their plight and sacrifices.  It’s the central theme of the film. We live Hassan’s journey as a dreamer who ends up becoming an undocumented worker, and the audience only empathizes with the choices he makes instead of judging them.  That’s why this film is so important.  One must refrain from using labels or biased representations of people based on their ethnicity, religion or color. The Illegal makes you hear these untold stories. You have always managed to get brilliant performances from all your actors. What is your process with them and what kind of brief do you give them?

I think I’ve been blessed to have worked with such great actors. Both my features were produced in a very fast-paced setup where we had no time for rehearsals or script sittings because of budget constraints. But I really believe a good script with great casting would always lead to good performances. Casting is directing so that’s the other aspect I’m very involved in.  Onset, we follow the text but I’m very open to improvisation, and with such naturally talented actors things become easier.  For ‘Half Widow’ though,  I did cast a lot of non-actors,  but the basic principle was to connect with the character personally and deliver lines as you deliver in real life, even if that involved changing dialogues, I was very open to that. One must go with the flow and be open to collaboration with the actors.

Your next film Pashmina has been shrouded in a lot of secrecy. The cast and premise seem very interesting. Could you talk a little about that?

Pashmina is my dream project. We’ve been working on the script for the last 3 years and have finally locked it very recently. We’re currently in prep, and due to the current Kashmir crisis, the project got delayed again. We hope to start shooting this winter. We’d like it to release in 2020.

There are a lot of films that get screened in that film festival circuit, but don’t get a wider release. Why do you think that is and how do you think it can be changed?

It’s a very competitive field as you know so it’s very difficult for independent filmmakers to get their work out.  I just pray big festivals to concentrate more on indie films like they used to. Even now they’re deviating from the very basis of their identity and focusing on big films with big stars for their premieres and official selections which are really sad.  I just really hope festivals focus on good stories and give chances to independent voices the way they used to. With the rise of new online content because of OTT platforms. What is your opinion on them and would you work with them in the future?

OTT platforms are a great platform for independent filmmakers to bring about new voices. These are exciting times for filmmakers who aren’t able to release their films in the theaters. But I see even they are diverting to choosing stars and big production houses to produce content for them which is so depressing.

Finally, what are the five films or filmmakers who have had the biggest influence on your work?

He is a huge inspiration.  His feature Double Life of Veronique is a film school of its own and I watch this film every time before I start a new venture. Even his Three Colors trilogy is art at it’s the best.
Majid Majid:

I love the extraordinariness in the ordinary lives of his characters.

His work on Omar was terrific.

Woody Allen, Kenneth Lonergan and Steven Spielberg are some of the directors I look up to.