Posted on October 1, 2016 by Siddharth Naidu 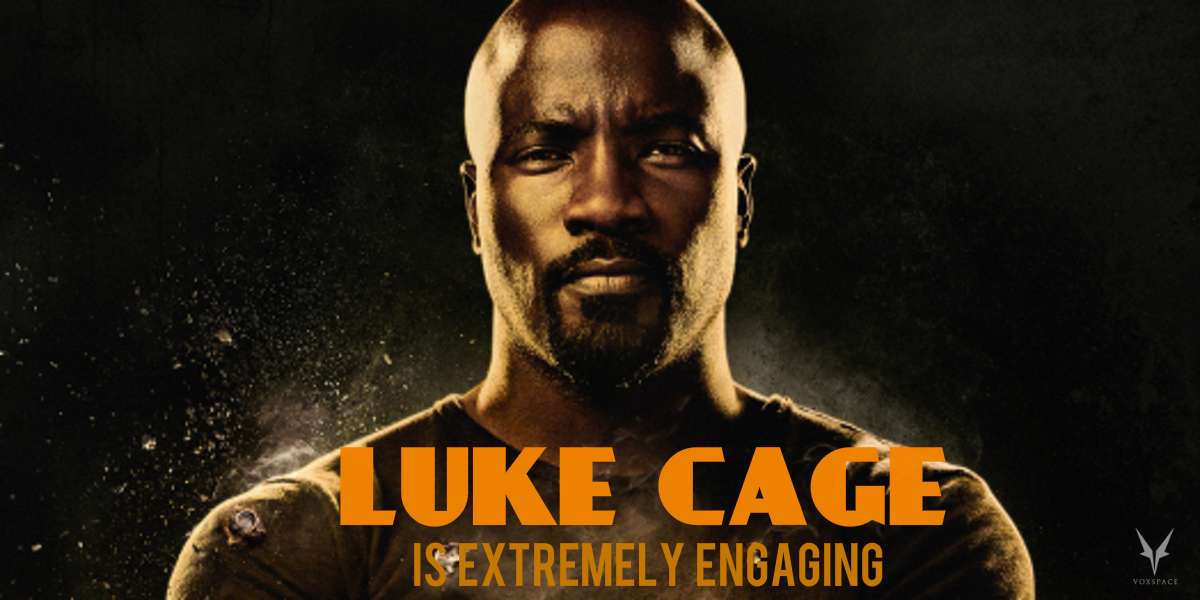 The most recent symbol of the new golden era of blackness is Marvel’s Luke Cage, Netflix’s latest entry in its very own Marvel Cinematic Universe and further proof that “blackness” may be the closest English approximation of “je ne sais quoi.” After first popping up in Netflix’s terrific Jessica Jones series, Mike Colter reprises his role as Marvel’s chain-gang John Henry, a totem of black masculinity with literally bulletproof skin. Colter, who so gamely played drug lord Lemond Bishop in The Good Wife, uses his physicality and gravitas to even better effect as the hero of the story. Luke Cage’s fleeting appearance in Jessica Jones hinted at great things to come, and the final product meets the high expectations.

Luke Cage mostly follows the storytelling template laid out by its Netflix predecessors. Its story unfolds at a slow and steady pace, initially to a fault. But as its pieces fall into place and the show relinquishes its potent origin story, Luke Cage becomes more intoxicating. Much of the show’s success has to do with Colter’s performance, which is, for lack of a less punny word, marvelous. He even manages to look like a badass while tossing off Luke’s hokey signature exclamation “Sweet Christmas!” It’s the kind of lead performance that could easily throw a show off balance, but Colter is well-matched with Mahershala Ali, whose unsettling charm and billion-watt smile are put to optimal use as the sinister Cornell “Cottonmouth” Stokes.

The story itself isn’t exactly boundary-pushing, starting with Luke’s meager beginnings as a low-profile dishwasher at Cottonmouth’s modern speakeasy, then being sucked into Cottonmouth’s orbit as well as that of Misty Knight (Simone Missick), the detective investigating an illicit deal gone terribly wrong. Creator Cheo Hodari Coker brings the world to life with rhythmic dialogue, one example of how Luke Cage’s appeal is more a result of the execution than the fundamental concept. We’ve seen plenty of broken masculine superheroes, including Netflix’s Daredevil, but none who invoke the spirit of Crispus Attucks or mollywhop their way through a gaggle of henchmen set to the tune of Wu-Tang Clan’s “Bring Da Ruckus.”

If nothing else, Coker has created Marvel’s most stylish television world along with director Paul McGuigan, who shot the first two episodes. They’ve created something akin to a contemporary vision of Chester Himes’ Harlem, but combined with a classic comic-book story about the great responsibility that comes with great power. And it’s difficult to overstate how good Luke Cagesounds. Among the show’s master strokes is drafting Adrian Younge and Ali Shaheed Muhammad to compose the score, which perfectly blends blaxploitation and hip-hop sensibilities. (To deepen the connection to hip-hop, every episode is named after a strategically selected Gang Starr track.) This visual and sonic palette isn’t used to great effect much these days, as the era of reboots has largely left out blaxploitation and its complicated protagonists. Coker has managed to gracefully update the genre, a feat as herculean as the ones Cage pulls off.

Luke Cage is the result of a meticulous vision, and it should rightfully elevate Coker into the league of television auteurs. Coker, a former hip-hop journalist turned Southland scribe, is following in the tradition of David Simon, who demonstrated with The Wire how a journalist’s eye for detail and quest for authenticity can serve a scripted story just as well. As a result, Luke Cage is the type of show you can strongly admire even if you don’t like it—if only because it’s a wonderfully, powerfully, unapologetically black show, a label it now shares with Queen Sugar and Atlanta. Blackness, when rendered with respect and admiration, packs one hell of a punch.