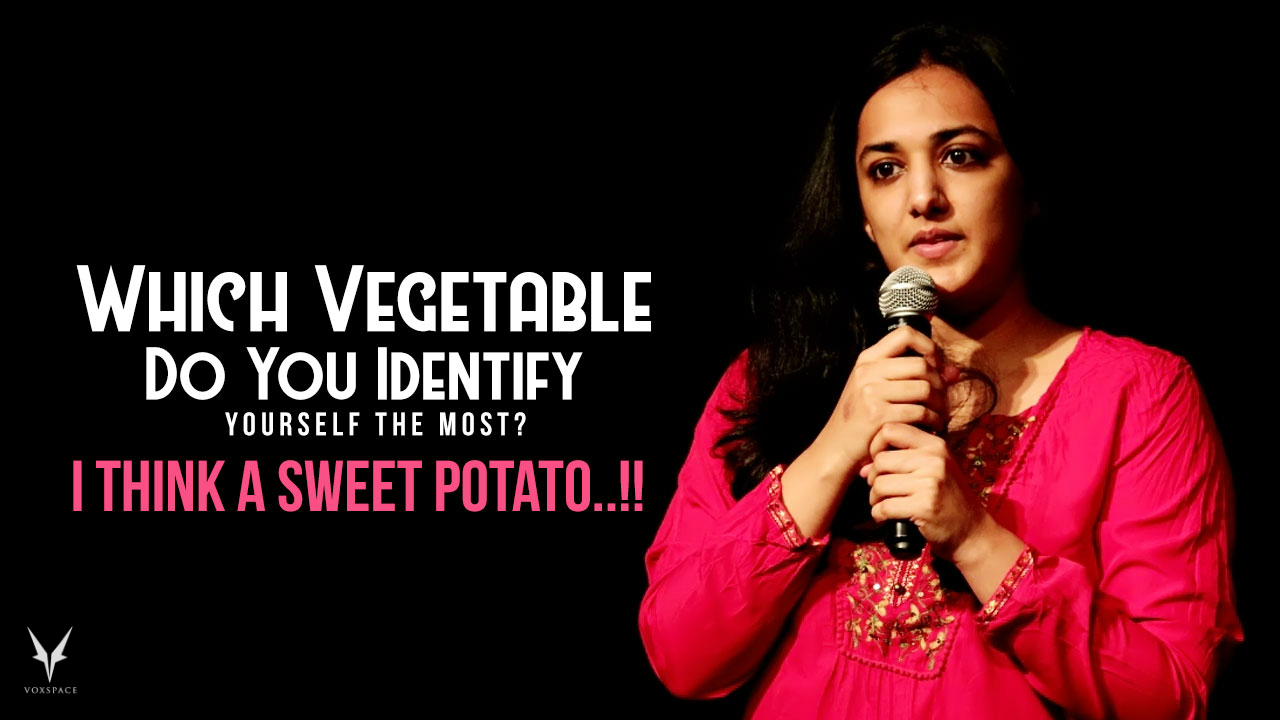 Yeah, well here’s someone you need to know about. A comic, Pooja Vijay, who is doing pretty much of a Dangal, these days in Delhi comedy circuits. Interesting story here – I got in touch with her 3 months back through a mutual friend and we discussed many things about the present comedy scene in India. We discussed so much so that, we eventually couldn’t zero in on what we could a nice article about. So now, we racked our heads and finally decided to go ( actually it was Pooja who came up with this). Eventually, we went about and made a rapid 47 question interview, and here’s what we have to share with. (Why 47? Well, I don’t know, it sounds good right?). Have a look at what Pooja and I fought out our wits in a series of weird questions:

1. Why the name Pooja Vijay?
A. It’s my god given name, Though actually, I have a longer last name which I won’t reveal to you.?

2. What percentage of people call you Pooja…And how many call you Vijay?
A. Hehehe. Most people call me Pooja. My friends call me Puji, Juju, Juji, All sorts of nonsense. I forbid being called Poo ?

3. Where do you hail from and where are you living presently?
A. I’m Tamilian, hailing from Bangalore, presently living in Delhi

4. Which Vegetable do you identify yourself with the most and why?
A. Hmmm.. I think a sweet potato. Because I’m…lazy but also a nice person hahaha..!!

5. Do you identify yourself as a North Indian or a South Indian?
A. Southhhhh…..Omg South..!!

6. What’s that one place in Delhi you always go to when you are super happy?
A. Ohhh. I like going to Delhi parks. They’re so beautiful. Lodhi garden, Deer park, Mehrauli..!!

7. Where do you get your wit from? Mom?Dad? Or Some Aunt?
A. Neither actually, my childhood friends From Bangalore !!

8. Between Mathematics And Sciences which one appeals to you?
A. Science! Definitely and unequivocally Science..!!

9. One Comic who never fails to crack you up?
A. Indian or foreign?…If anyone..then..Then Noel Fielding

10. The first gift you’d buy to get rid of someone
A. Mouth freshener? They’d be insulted right Or would they think I’m interested in them…Oops.!! That might not end up well

11. Weirdest gift you got from an admirer or a crush or a boyfriend?
A. Oh, this guy who bought me this really stinky gift. It was an old smelly oyster and if you opened it there was a pearl.? But it was so stinky

12. Between Salman’s Dance And Rakhi’s laughs, which one is better?
A. Rakhii forever and always…!!

13. Where do you get the best Chicken kebab in Delhi?
A. Who knows. I’m vegetation…Oops..Vegetarian

14. One Moment that defined your career as a comic?
A. My career as a comic. Happiest moment was when I did this open mic which turned out to be a competition
And I won. It was amazing.It was the beginning of my career, and all my Delhi friends were there cheering me. It was so warm cosy and loving. Magical really.

15. Where do you get the best paneer kulcha in Delhi?
A. Paneer kulcha, also I don’t know ?

16. Type one sentence in Kannada which means “Game Of Thrones Is In Its Winter”
A. Hahaha, what made you think I speak Kannada ?. Kannada gothilla..!

19. What do you get when you place a zebra in a fridge?
A. Is that a trick question ? Hahaha

21. What was your first out of the city show, and what’s your fondest memory of it?
A. Chennai!!! My motherland. Hahaha, a girl came up to my co-performer and was like you’re soo funny. Amazing
Comes up to me and is like, you’re really pretty. I’m like err.. hello, My comedy??

22. If you weren’t a comic today, what would you rather be or do?
A. Hmm…. Probably have time to date

23. Describe Jallikattu in one sentence for us?
A. Jallikattu: another excuse for men to touch humps without consent..!!

25. A little girl kicks a soccer ball. It goes 10 feet and comes back to her. How is this possible?
A. It had a boomerang inside it ?

27. When was the last train ticket that you bought and where to?
A. Jaipur. Last week.

28. When was the last time you ate Vanilla Icecream?
A. Hmm.. I can’t remember ?

29. The worst joke you’ve ever cracked?
A. hahaha, the worst joke? Worst joke I’ve made… ugh too many to count I guess.

30. The show where you had perhaps the best audience ever?
A. The best audience, I think the other day. This lady just kept telling me you were the best act of the evening.
Even though I was performing with other big celebs!

31. What happens when a comic forgets his lines and the whole world is staring at him?
A. Yeah forgetting the lines is a bit embarrassing. I’ve had a point where I just walked off stage abruption
abruptly.

(The conversation goes mum for more than 5 minutes)

33. Are you sleeping?
A. Hahaha, my phone died had to switch to the laptop so wait!

34. How did the show go today and which celebs did you get to participate alongside with?
A. The show today was AMAZING. Karthik Kumar allowed me to open for him. which was such a humble experience seeing a star like that! Alongside Shridhar Venkataraman who is also an amazing upcoming comic. ( The show being Karthik Kumar’s Second Decoction Premiere In Delhi On 27th Of Jan)

36. A truck driver is going down a one-way street the wrong way, and passes at least ten cops. Why is he not caught?
A. Hehe, he wasn;t driving the truck? Just walking down?

37. Love-Marry-Kill..Choose one for each = Kanan Gill, Kenny Sebastian and Zakir Khan
A. No no, I’m not doing this.? That’s too controversial. hahaha.

38. One line you always repeat in your shows and is like your thing?
A. I speak about my stutter! I have a stutter on stage and I try to address that.

39. Where do you see yourself in like 5 years now?
A. With a PhD degree and maybe some children.?

40. Five things you can’t leave your pad without?
A. In Delhi, my air pollution mask, phone?, my wallet, a book, metro card!

41. What are you thinking of this interview……..at this moment?
AI’msleepy, when will it end…Hahahahha..Hope he doesn’t misquote me!

42. Which movie recently is the stupidest you’ve seen?
A. I don’t watch too many movies ?

43. What would your answer be for the 32nd Question if you had other options?
A. you never asked me a 32nd question did you?..I had to scroll up..!!

44. Which Game Of Thrones character do you identify yourself with and why?
A. Hehehe, the Tyrell grandmother! Lady Olena !I love her!

45. If you had to disappear under a different name what would you choose?
A. What’s in a name? A rose is a rose is rose!!

46. Why is being a Comic important to you?
A. Because its an important creative outlet of expression which makes me feel like I can get my views out there
and also be amusing..!

47. If you had shout at me angrily, what would you say right now? Last……When do you think we really live?
A. LET ME SLEEPP. We live when we are being most vulnerable…you don’t love unless you allow yourself to feel vulnerable!

That’s all folks…We’ll let her sleep, for tomorrow I’m sure she’ll be one of the finest comedians we have in India. Don’t forget to follow her works in your city, when she comes about. Cheers to Pooja Vijay and Voxspace wishes her a great career going ahead..!!

Related posts:
VoxTalks With Anurag Kulkarni : 'Take Life As It Comes, But Put Efforts To Make It Better'
The Death Of Hyderabad's Cross Country Biker Sana Iqbal - They Claim It's An Accident. She Confessed...
[VoxSpace Life] Sexual Abuse And Pedophilia : The Horrors Faced By The Boy Scouts Of America