Conversations With Actor & Writer Shailja Chaturvedi : An Ode To The Theatre Culture In Hyderabad 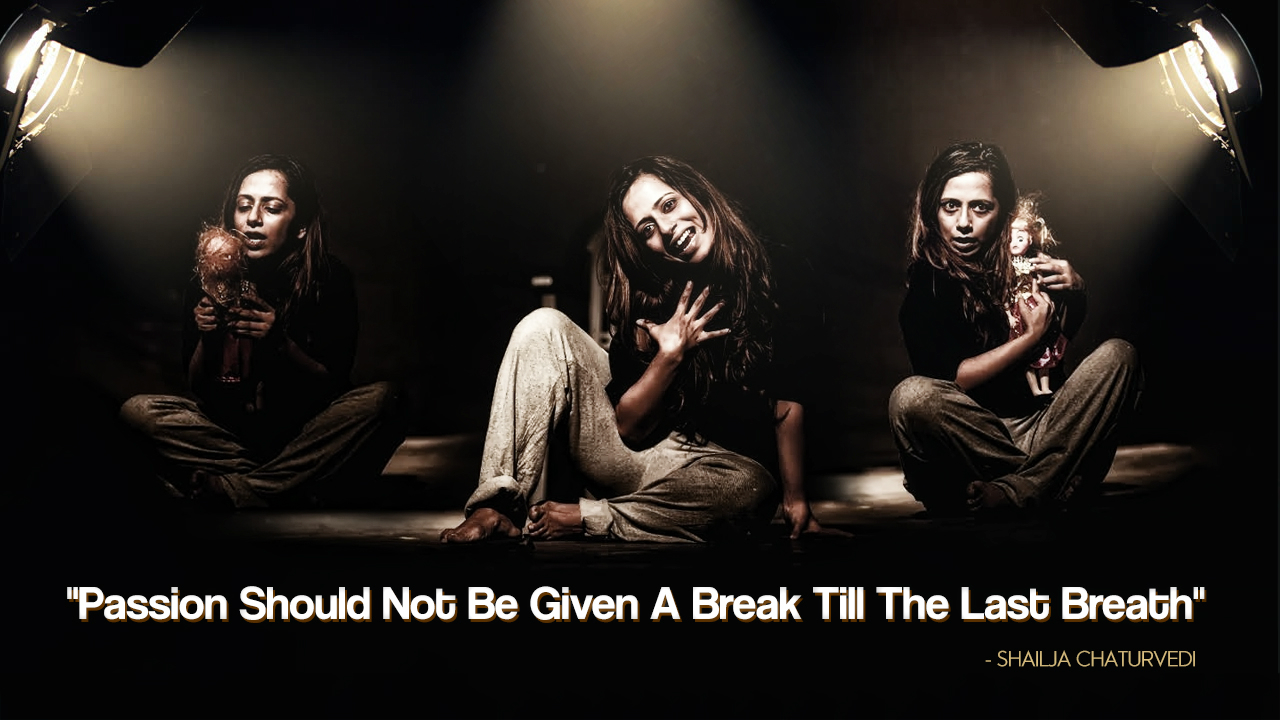 “The word theatre comes from the Greeks. It means the seeing place. It is the place people come to see the truth about life and the social situation” – Stella Adler (Actress). In a world filled with chaotic routines, Theatre serves as a vehicle of goodness, a retribution of sorts, for people watching it, and more so for the people involved in it. Through ages and more, Theatre has always been the one place general populace goes to, in order to temporary get a glorious breather, out of the mundanity of everyday life. It is in this context, we met a highly talented actress and a writer of Theatre contour, Shailja Chaturvedi, through our kind friend Rajasekhar Mamidanna. We talked at length with her about the thriving and progressive Theatre culture of Hyderabad, and the various poignant facets of it. And more importantly, about her, much appreciated acts and her journey till now via a popular theatre group, Manch. The excerpts of it below… How would you define Manch, the theatre group? What is its origin story and from which kind of passion and people does Manch derives its soul from?
Manch Theatre is a group of Tech professionals whose stage craziness extends from ‘post-work-hours’ to ‘wee-hours-in-night’ to ‘all-hours-in-weekends’. Manch was born in 2004 as a hobby club at Infosys, Hyderabad by people with a common passion – theatre. And in all these years the passion never went down. Manch has performed multiple plays in Hindi, English, and Telugu and achieved various milestones since 2004. Manch has participated at various corporate events and fests. It also got an opportunity to perform for the SHE team of Cyberabad police and got recognised and appreciated by the Cyberabad police team. Manch has participated in various theatre competitions and has come back with flying colours. It has been a roller coaster ride for Manch but ‘Manchurians’ (as we call ourselves), have never given up and it is the passion which drives the team to do better each time as we proceed. Theatre being a pure and pious platform, do you think that the Plays taken up are as uninhibited and raw as they come? Being someone from the stage, do you feel perhaps restrictive with the material you come out with? How does Manch escape the routine or inhibitions?
When writers write they write the purest form of their thoughts but when they are taken up by artists like us and those even more experienced face certain limitations. Say, intimacy is described in the fewest of words but enacting the same without losing the essence and writer’s emotions can be a challenge. Or say, a scene where the writer describes a scene where animals are butchered, a scene like this might not be so appalling while reading or writing as it can be when showed on stage.
Manch like every other upcoming theatre group with a variety of audience takes care of the sentiments of the audience and tries to put forward the best act with the resources provided. We can make a person fly with a harness if the resources are available and sometimes even enacting a brutal scene can be difficult, and we end up using packets of poster colours which might not be able to give justice. So yes inhibitions are always there, but imaginations are never bound. As an Actor within the Theatre scene, what are the measures you take to perform varied roles? Could you walk us through the preparation that goes in for a particular role?
It starts with reading the script be it when the role is assigned to you or you chose it on your own, depending on your comfort with the character. We perform the characterization based on what the scripts say and what we feel the character says about. When the age of a character is not explicitly mentioned, we safely assume it, basing on certain parameters of the script like the strata of society the character may belong to or judge of the physical appearance and mannerism described.
We then decide the kind of clothes that would do justice to the character, followed by dialogue reading. Next, we do blocking, where the director instructs and decides the direction of each dialogue and scene which is delivered. For example, the lady walks up to the door in a certain way and ensures that the stage profile is maintained, followed by the run through and fine-tuning of the loophole that is discovered during the run through. It ends with the dress and technical rehearsal to ensure the writer’s thoughts are communicated in the best way possible. And, finally we are all set to put the stage on fire, not literally!

While we are on the subject, of all the plays and integration, which one role has been the most challenging for you? And how did you go about doing it?
Kulwant Kaur from Thanda Ghosht written by Saddat Hassan Manto would be by far the most challenging role. I played the role of a mistress who was a well built Punjabi woman filled with intense emotions of love, lust, anger and jealousy who eventually ends up killing her lover in the wrath of discovering another woman in his life, and his inability to satisfy her sexual desires and senses infidelity. This role demanded a high degree of comfort with the co-actor who played Eshar Singh, which I achieved by conducting comfort and character building activities. Being originally from Uttar Pradesh, and a girl with controlled emotions and a petite body I had to work on my accent, body language, gestures to bring out the strong character of Kulwant Kaur. My director, Ali Ahmed, made me watch videos of Pakistani women to understand their behaviour and mannerisms and held activities like dancing and singing before our daily practice to help us give our complete body and mind to the character. We’ve always heard that Theatre actors find it a bit difficult to transcend their talents to other mediums like Movies, TV Series and such. Why do you think that is? Also, who are the actors that you look to find inspiration in your work?
I beg to differ with you, as I feel actors “act” be it in movies or theatre. The difference lies in an area where one needs to understand the camera, but in the theatre, one needs to build the connect with the audience to ensure that he/she does not look away. In fact, I see theatre as a platform where you hone your acting skills, and with a bit of polishing and getting the camera sense, you are hopefully good to go.
I am highly inspired by actors like Nawazuddin Siddique, Swara Bhaskar, Radhika Apte, Kalki Koechlin for their effortless acting.

Apart from being an Actor, you also Script plays, like Asmita which I hear many accolades about. We’re curious as to how you balance both the acts. Are there any scripts which you’ve written but not acted in? Also, we often find that the writers tend to be partial to one of the characters of all. Comment.
I wrote Asmita when I just couldn’t get over the fact that women and their bodies are so materialised, that heinous crimes like rape, molestation have become a common and daily news. I was in Varanasi when I wrote the script and what provoked me to pen it down was the rape of a four-year-old by a PG student. The whole news took me days to sink it in! It was brutal, scary and unimaginable. We, as girls, have learnt to “avoid/ignore” situations like somebody following us on the road, eve teasing, or situations where girls are sexually abused in their homes by a teacher/relative/friend and are made to keep it a secret as the society might not be able to approve the fact that it wasn’t the girl’s mistake. There are a lot of emotions, experiences, and psychology involved with this monologue and yes I was partial with the particular character. And I feel, writers tend to be partial with one of the characters as they build the story around it. And somebody who plays the pivotal role in any story has a lot of responsibility to perform. The readers get emotionally attached to the character or even build their expectations to it. But it always differs from one writer’s vision to another’s.
No I haven’t written any other scripts, but I do write poems sometimes but never to publish it. Just as another hobby. And these hobbies or acts of writing and performing can very well be managed as both make you understand things better, feel the emotion better and opens up your mind to have multiple angles to one particular situation. Lastly, If someone were to take up Acting as a full-time occupation in the theatre scene, what would he or she be wary of? Would it work to have just this and nothing else? What would you advise them to do?
Well if acting has to be taken as a career then I feel all the procrastinations, inhibitions in mind or any thought which stops you from doing it should be get rid of. One can be worried about a lot of things like the amount of struggle it’s going to take, the huge competition one is going to face or fear of recognition but I feel if you possess a talent and you are religiously dedicated to it then it will not take forever to get the recognition.
It would work to have just this and nothing else. In fact, the question itself is a little wrong as Acting is a Job and it is the work of the actor and somebody who loves acting and take it as a job, will find an enormous way to pay their bills and when their day comes, paying for PRADA too. Nawazuddin Siddiqui and many actors like him are living examples of the same. I have not achieved a position to give advice to anyone. They know what they are doing, and they have planned their life. I just wish for better opportunities for everyone and hope the artists are taken more seriously as the “Engineers/Doctors” because it takes guts to follow your heart and also a different level of dedication. Sometimes it doesn’t feel right, and one feels like dropping all the dreams and just go back to the regular desk job (I respect the job with all my heart, I am just not meant for it), but I know everybody has their day and whatever happens, passion should not be given a break till the last breath.

So that was Shailja Chaturvedi taking time and talking to us about the various intricacies involved in theatre. We are surely going to watch her portray many more wonderful characters in time to come. You can follow her works via Manch Theatre and discover the true potential of visual storytelling. Until the next time, we bid you farewell..!