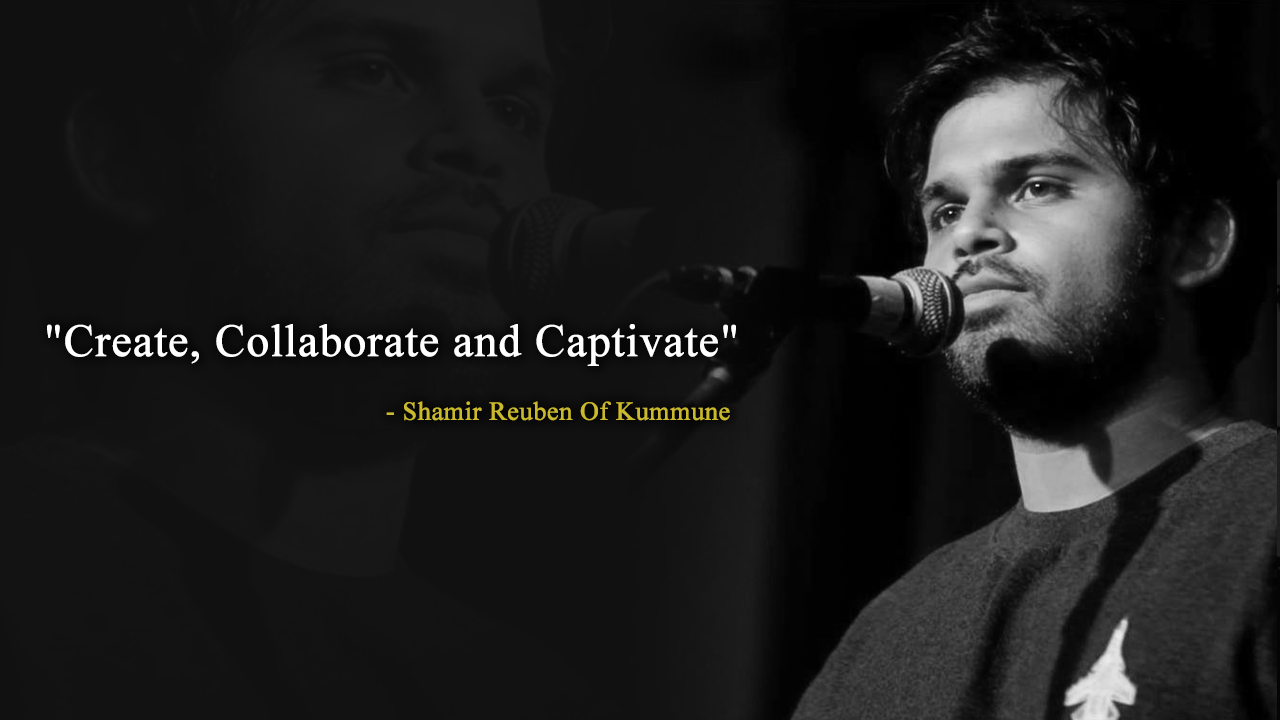 To start this article on a frank note, Poetry in our part of the world is looked to be an escape art. A reactionary art form than something bearing the soul of pure creation. That’s the sad part of it. Poetry is not always just a way of expression; it is an all encapsulating way of life. It is the means by which minds and souls achieve an unwavering connect. To think just and beyond. To live in heaven and on ground. And to imagine and present ideas which transcend time and space, and become immortal in everyone who listens to it. Today, we had the opportunity to Shamir Reuben, who believes in bringing the best poetry existing in our country, out to the world, via a performance arts forum, which goes by the name – The Kommune.

One of the most highly regarded poetry, slam and spoken word poetry collectives in the country today, The Kommune has become an envious repository of impactful visual presentations of the art form. Shamir talks to us in this regard and tells us as to what makes Kommune click as an organisation, and why it means a greater deal to the present generation of writers, and of course the poets. The excerpts of it below…

Definition of Kommune By Shamir Reuben, And Its Success Formula:

In its bare minimal definition, Kommune is where we try to create magic through the power of personal narrative and performance art. The dream was to build a platform that would allow us to showcase the country’s finest performance art pieces to the world. To borrow a page out of Ratatouille’s Chef Gusteau, we believe anyone can cook. We serve to inspire not just artists but people from all walks of life to come forward and share their experiences with the world through storytelling and Spoken Word. I think the success stems from the fact that we’re accessible and consistent with the quality that we provide through our medium. People always come back if they find something worth keeping the last time around.

Create, Collaborate and Captivate – The Story Behind This Three Word Slogan:

The entire idea was to break down the creative process into three easy stages- you create a piece of performance art that you’ve put your heart and soul into. You collaborate with us, allow us to provide our collective insight, knowledge on performance art and our stage to your talents. And when the piece does make it to the Kommune stage, we captivate together. At Kommune, we do understand that transitioning from writing to performing can be tough for a lot of people, but we ensure that our team works with the budding performer before they even make it to stage. The keyword here is curation. We do our best to make sure that you give us yours.

Personal Inspirations For Shamir Reuben And Derivatives From Them:

I have been writing since I was 16, but I didn’t start taking to stage until I was 21. I’ve always been rather stage shy, and 45 performances on I still get very nervous when I’m performing. I have a list of people I admire and whose work I analyse, study and use as motivation for my creative output. Shane Koyczan, Milton Jones for their writing genius, Bo Burnham for the performance aspects. I also love watching Battle Rap/Grime, so I also study Adam Woollard (Shuffle T), Jake Brook (Lunar C), Soweto Kinch and more when it comes to writing cohesively. If you’re asking for individual pieces, I could go on and on, but I watch Bo Burnham’s special “Make Happy” a lot. I dream of creating an experience like that on stage, I’m nowhere close to as talented, though, but I’m trying to make up for that by hustling.

Definition Of Slam Poetry, Microfiction Fan Fest And How Does Kommune Celebrate It:

Slam poetry and spoken word have minor differences when it comes to formats. Slam poetry has a competitive connotation to it, plus a time peg at 3 minutes (in most cases). Spoken Word is more liberal with its structure, time limits and execution in general. In essence, both are the same; using words to construct a lucid, mesmerising experience. The general misconception is that spoken word is meant to rhyme, but it doesn’t. “Flow” can stem from the arrangement of sentences as much as it does when it comes to an arrangement of rhyming words.

The Microfiction Fan Fest had Kommune taking notice because micro fiction is essentially the genesis of any piece of writing. If you don’t understand molecules, you can’t understand how or why the world functions. Similarly, if you can’t grasp the nuances of condensing and expressing in limited spaces, you can’t hold an audience over a sustained period. Because Kommune creates long-form web content which is popular even in the age of limited attention spans, we felt it was an integral part of understanding how stories work, so we collaborated.

People Managing And Driving Kommune Ahead:

We’re a very closely knit bunch, to be frank. We have six full-time members- three co-founders (Roshan Abbas, Gaurav Kapur and Ankur Tewari), a Director (Tess Joseph), there’s yours truly, who heads Content and Social Media and then there’s Hari Sankar, who’s handling Kommune’s newest initiative, Beatmap. We’re constantly looking to expand into new areas; it’s just that we are very cautious before we undertake new projects. It’s easy to pick something exciting, but it’s insanely difficult to keep a steady flow of quality content from different creators coming your way. Once that happens, we’re more than happy to take it up and help it spread its wings and take flight.

Bringing In Resources And Managing The Events:

The key is the balance. We want to remain accessible, so our tickets are probably some of the most modestly priced in any event roster (300 bucks for a two-hour session). And when your prices are that low, sometimes it’s difficult to recover the cost + effort of making something like this happen week after week. We do this by taking on loads of intensive workshops for corporates and other stuff to allow us to keep the scales tipped in the right direction.

The Workshop Structure And Rules & Regulations Of Sessions:

We rarely ever do pure-performance sessions unless we’re putting together a showcase for a brand or an event. In a workshop, we work with audiences to allow them to participate in the Storytelling process and then get them to perform on stage. The latter half of the workshop is performances, where we mix up audience tellers plus our selected performers. There is 100% curation at every show. The only rule we give to people is that it needs to be a real life story. After that Kommune gets to work and tries finding the best of the lot.

To answer the curation, I think it depends on the curator. Protest poetry and most slam pieces are in-your-face because the theme requires that the writing and performance be explicit. Storytelling is a little more sober in that sense; the methodology is to narrate a story that resonates without wanting to make a direct impact. The cringe factor comes in when you try too hard to be heard.

Around a 100 is more accurate. There have been times when I got 100 in a day. And no, I’m the only one who goes through all those entries. My team trusts my judgement, and I handpick only the best ones to ensure that they get to come on stage. Yes, it is exhausting, and on days I feel like I’m rubbing a cheese grater across my forehead, but from time to time a find a heartbreaking poem or an uplifting story (or vice versa) and suddenly, everything’s fine (pun intended).

The Story Of Shamir Reuben, And What Defines Him:

The head of Content was losing his head before the kind folks who found Kommune, decided to bestow the title upon him. I studied five years of Journalism, only to discover in the final one that Spoken Word was what my heart wanted all along. So I swapped a dreary corporate job for a risky but incredibly exciting project and thought I’d go all in. So two kids fresh out of college worked tirelessly from a little room in Versova towards an ambitious dream, and thanks to the unconditional love and support of our co-founders, and of the hundreds of people who come to watch us at every show, we’re humbled beyond belief to say that we feel we’re getting there.

Personally, I’d like to keep growing. I think I’m only at 20-30% of my potential right now and I’m writing, performing and trying out new things like a madman to see what avenues I could explore. I’m hungry every single day, and I want to create content that will change lives for the better. A healthy mix of silly and introspective, because that’s probably how I’d define who I am too.

The Future For Kommune, And Shamir’s Pick For The Best Story:

The dream is to keep growing the Kommuneity until we’re having Kommune shows across the country every single week. We want it to replicate our hugely successful Mumbai chapter across all cities so that people learn to make us synonymous with performance art. Instead of a night of mindless partying, we’d like to tilt the scene and bring you to a place where you could sip on wine, listen to life changing stories, revel in conversation and leave the room a reinvigorated individual. We also want to pull of international shows, so we’re going to keep working recklessly hard to make that happen, so our best performers can live that dream with us.

I’m going to be selfish and say that it was the story I did for the first time. I went up on stage, terrified of my thoughts and came down feeling like there’s nothing else I’d want to do in my life. It was my turning point, so I still cherish it every second. To define, Kommune in five words, Well I love the Greek word Meraki, which loosely translates into “putting your a little bit of your soul into everything that you do” because it applies to what the core team and every storyteller do at Kommune. There’s Kintsukuroi/Kintsugi, which is Japanese for repairing broken pottery by using powdered gold/silver. I feel a little like that when I go on stage, and I know people who performed some of our most moving stories probably felt the same way. The other three are Revolution, Family and Magic.

So, that was Shamir Reuben, Ladies & Gentlemen, talking to us about the importance of poetry and the participative excellence in performing it with a beating heart in front of willing souls. For a more wonderful time over this weekend, don’t forget to follow all their works at the official YouTube channel of Kommune, and of course, do follow their page. Until next time meet, Do Awesome..!