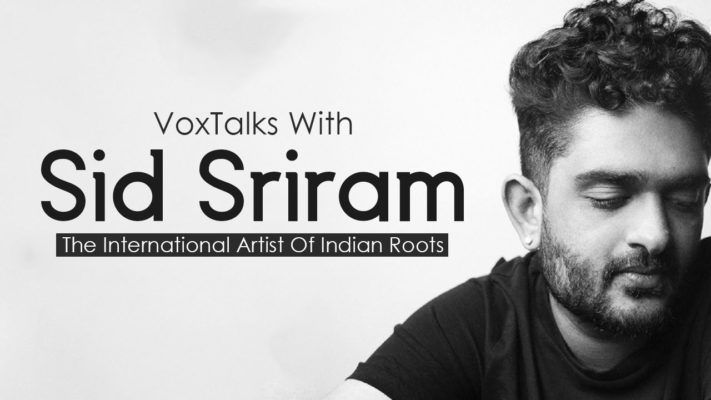 Sid Sriram – The Find Of The Decade

Sid Sriram. What do I tell you about this exciting talent, that hasn’t been vouched for by every music lover? A vocal artist, who for all purposes brings a layering and haunting art to the music we hear. An unforgettable pain in his voice makes every melody, every solemn song, escalate into something mellifluous and timeless. Sid Sriram is being touted as the find of the decade for South Indian music presentations.

An A.R.Rahman collaborator for many tracks, Sid Sriram has carved a niche for himself, to a level where music is now being composed to match to his sensibilities and nuances. And so magical things happen. Not just one to achieve fame in the commercial music arena, Sid Sriram has managed to garner much acclaim from his independent projects as well. There is so much to talk about him. Hence, to bring out his story in the best manner possible, here we are talking to the music man himself, Sid Sriram. Our conversations with him went as below…

Today, you enjoy a superstar status in singers, here in the South Indian movie industries. I can personally tell you that you are a favourite here among Telugu music listeners. When you look back at your journey what are the three career altering things that you fondly remember and owe your success to?

First of all, thank you for the kind words. I’m very happy to be doing this interview. I think there have been many different points of inflexion in my career but if I had to chose 3, here’s what they would be. Firstly, When I was in the 5th grade, I attended my first Carnatic music competition in Cleveland, Ohio and got first place. That moment was pivotal for me because it was the first time I really started to take music seriously. The next moment would have to be when I was accepted into Berklee College of Music. I realized at a young age that I wanted to be a professional musician. Studying at Berklee is what made it possible.

My time there really shaped my work ethic and my vision. The third moment would have to be when AR Sir responded to a cold email from me. Soon after Sir had won the Oscar for Slumdog, I sent him an email with some of my music with no expectation of him even looking at it. A little later, AR Sir responded and soon after that is when we recorded Adiye. The rest, as they say, is history! Each of these moments will forever be etched in my memory as a reminder of why I do this.

Jazz, Blues, Acoustic, R&B and a strong Carnatic base to support everything. Truly there’s so much going on. This brings us to the question, where does your musical journey start? And more importantly, how does someone who comes from a Carnatic background break into commercial and yet unconventional vocal presentations in Movies?

My mother is a Carnatic vocalist and teacher. She started teaching me when I was 3. I think she recognized that I had a natural ear and affinity for music. My early years were dedicated to rigorous Carnatic music practice. I grew up in the US but we would make yearly trips to Chennai for me to further my Carnatic music. When I was around 10 I started listening to Jazz and R&B genres; I was self-taught in those genres of singing. I think the fact that I’m deeply entrenched in Carnatic music, and have a strong grasp of R&B/Jazz/Soul has given me a natural inclination to experiment, to be open to it.

From Adiye to now, AR sir has created such unique contexts in which he’s used my voice, where the music becomes both experimental and commercially very viable. When I sing for other music directors or when I write my own music, I try to keep in mind the lessons I learn from Sir.

In one of your interviews, you mentioned that one of your music videos, which clocked a million views, opened up the doors for exciting collaborations and opportunities here in India. Most popularly, Adiye from Kadal by A R Rahman. Now, that makes for an interesting story. Could you perhaps tell us more about how it all turned out to be?

I started releasing independent original music and covers via youtube in 2009 while I was studying at Berklee College of Music. When I first started releasing music, I really did it for the fun of it. Slowly, I started seeing a fan base build. It grew to the point where a couple videos were getting a lot of attention. One of these videos is what I sent to AR Sir in the email I talked about earlier. I think there is a definite upside to the role of technology in music, in this day and age.

A word prominently used to describe you aptly in one of the interviews is ‘Musical Duality’. The word signifies your Carnatic achievements, and your foray into commercial and pop music. In this regard, how would you deal with the word Musical Duality? Do you think it is something you have voluntarily enhanced over your journey? And today when you are someone who is immensely popular in commercial music, how do you balance the two parallels of music and maintain the said Musical Duality?

I operate with 3 musical streams: Carnatic music, Film music, and original independent music. A little while ago I came to the conclusion that though the forms are vastly different, for me they all come from the same source: honest, emotional, humble and inquisitive creativity. I represent a coexistence of my different influences, my different passions. At this point, I am blessed to be expressing this coexistence by way of all my musical endeavours, without ever letting one unintentionally cloud the other. It’s quite exciting to rock out on stage with the crowd singing Thalli Pogathey with me one night and to launch into a Karaharapriya aalapana during a kucheri on the next night. Music is music.

Let’s talk about inspiration. You have mentioned being under the patronage of Padma Bhushan P S Narayana Swamy, for your Carnatic endeavours. However, with other genres of music, you are immensely successful in, who would you say your inspirations are. And do you think you have probably picked music aspects from your inspirations, which have defined your career thus far? How would you say so?

I’m constantly influenced by different artists and kinds of music. Currently, my biggest influences are Semmangudi Srinivasa Iyer (legend of Carnatic music), Philip Glass (film composer), Kendrick Lamar (hip-hop artist), and MK Thyagaraja Bhagavathar. I think from these different artists, I’ve been soaking in their approach to composing and rendering music and the honesty with which they express themselves. I’m always listening to music, reading, watching films, look at art etc. Different aspects of all these experiences settle in my subconscious and end up manifesting in the music I perform and create.

Your collaborations with A R Rahman come to mind when we pick up a music list for your songs. In our talks with Shaktisree Gopalan, she mentioned that A R Rahman was someone who would work in a non-linear fashion, allocating layers of music to singers to own up. Would you say you’ve had the same experience? How would you describe working with A R Rahman, and what are the few things that really excite you while doing so?

In all my recordings with AR Sir, I’ll internalize the main melody and then during the recording Sir will throw ideas at me at a rapid pace; all I do is trust in him during the process and the product comes out the way it does. I am and will always be in complete awe of AR Sir and what he does. The way he hones in on the smallest of vocal details, the way he follows his musical instinct, and countless other aspects of his artistic genius bring songs to life; it’s really magical.

Lastly, with Adiga Adiga, your straight track in Telugu, you have practically made us swoon to your tunes and vocals. The question of course is, where to from now. Would you be able to tell us how the future of your musical journey is looking like? With independent music videos, how do you intend to further the brand of Sid Sriram beyond commercial bindings? Also, for music aspirants and people striving to make big as singers and musicians in Indian film space, what would your advice be? What do they need to do and not do, in order to establish a wonderful career such as yours?

Thank you! Hats off to Kona Venkat Sir, Gopi Sunder Sir, Nani and Nivetha Thomas. I’m so happy with how “Adiga Adiga” turned out, and honoured by how well it’s been received. I look forward to rendering more and more straight Telugu songs. The future of my musical journey consists of more and more experimenting and never putting any limits on my creativity. In the immediate future, I have a packed Season of Carnatic concerts coming up in Chennai that I can’t wait for. I’ve been doing a lot more experimentations with genre-bending, discovering my own way of bringing my different musical worlds together tastefully.

I’ll soon be releasing my debut full-length album titled “Insomniac Season”. I’ve been working on this album for the last 3 years with Grammy award-winning producer, DJ Khalil. I can’t wait to share this body of work with the world as it really does represent all aspects of who I am as a person and artist. I look forward to singing more songs for film and exploring new musical territory with each song. This journey so far has been such a blessing from God. This is just the beginning, I have so much more music I want to create and share with the world, so many more stages I can’t wait to perform on.

So that was Sid Sriram, being the wonderful artist that he always is. We can’t get enough of his voice obviously, and perhaps get hold of him again to discuss more of music today. It is interesting how he explained his work with AR Rahman, as being highly inspirational and uplifting. Something similar was shared within another interview we had with another AR Rahman regular, Shaktisree Gopalan. Do check her interview as well. May Music Make World Alive Ever.