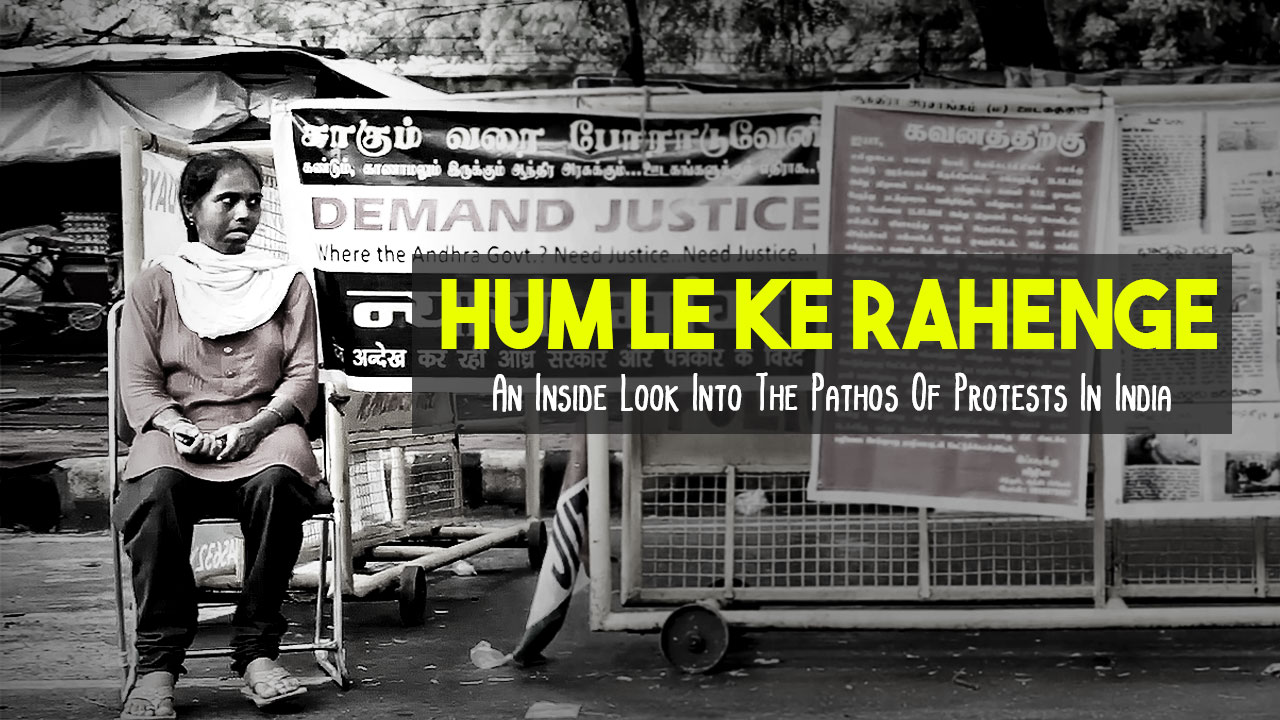 The Thoughts Behind Making A Documentary About The Protests In India

Isn’t it weird? When you think about it from a neutral perspective, you can see the humour in the most serious of protests. Yes, there are serious issues about which people take to the roads, and in all respect, these issues need to be talked about. But to a pragmatic mind, at times, some protests come around looking disorganised, misguided and practically humorous. The documentary series we are talking about today, not only captures the essence of humour and pathos in protests but goes a step beyond in quantifying what the protests stand for. You see, protests are more than just the issues and people involved. At the core of every protest, remains an unwavering need for change, a sustainable and a bettering attempt of life. In this respect, we got talking to Samarth Mahajan, the man behind this protest documentary, which is sure to bring about a great change in the way we look at life.

The Idea Behind The Documentary – Hum Le Ke Rahenge…

“Hum Le Ke Rahenge” is a campaign to document India’s protest culture. The project is about capturing the experience of protesting. The complexity of protesting is something which will be reflected, based on what we observe in a particular protest. There is no set emotion to our exploration. We attended a Dharna on NREGA where the activists and protesters were singing and dancing to protest. This does not necessarily take away from the protesters’ suffering but makes the protest more engaging for the participants and its messaging more sticky. At the same time, we have captured the protest by the Tamil Nadu Farmers, which is filled with the expression of agony as they have been pushed to the brink of their existence.

Our stories emerge from our deep conviction in principles of democracy. We want to create narratives that push the viewer to recognize the different sides of the story and not consume any information as a monolith. We believe that in order to engage, provoke and inspire to act, we need to consistently engage with our audience

For the “Hum Le Ke Rahenge” campaign, before going on the shoot, we had this faint idea that we wanted to explore India’s protest culture. I had never attended protests before this project. Once we were attending protests, we realized how an observational treatment can let others experience the protests almost first-hand. This seemed important as most of the urban youth, who we were targeting as audiences, do not attend these protests. Moreover, protests are generally full of action and activists try their best to keep the protesters engaged by adding interesting elements like poetry, songs, and slogans to rhetoric. So we, a crew of two – me and Imtiyaz (Cinematographer) – decided to use only a hand-held 5D camera to minimize our intrusion into people’s space. We also decided to focus on the human side of these protests, by looking at the protests from the point of view of a commoner and not a political leader or an activist.

On The Selection Process Of Protests And Interviews Brought Out…

There’s no fixed norm for choosing a protest. I check the events high page of Jantar Mantar and then get in touch with some student activists from DU to stay updated. Few of my friends who know I am doing something around protests, keep on tagging me on the Facebook event pages. If the protest is in Jantar Mantar, it becomes a more spontaneous process as a number of protests are on spontaneously and these protests do not necessarily get shared on Facebook. So we go to attend one protest, but end up experiencing two or three.

We normally do not face any problems while recording or interviewing protesters as protests are generally filled with media persons carrying cameras and recorders. We do face problems when we end up turning our cameras towards policemen or other journalists because they start thinking why are we shooting them. But whenever they have come to us, we have described what we are trying to do and most of the times it is not an issue. Many of the times the issues are logistical. For example, we shot the March for Gorkhaland in 45-degree Celsius temperature in July. We had to walk for almost 3 km in the heat. We drank at least 14 glasses of water on our way. Imtiyaz, the cinematographer on the project, had to climb up a bus to take an overhead shot. The project is created by Aman Kaleem and produced by Kahaani Wale. We are constantly witnessing how popular narratives are overpowering conversations on different issues. These conversations are becoming binary in nature and therefore devoid of diversity. We want to fill that gap by creating alternative narratives. Hum Le Ke Rahenge does that by amplifying dissenting voices from all parts of the country, irrespective of political inclination. We want to tell stories of invisible protests and human resilience in South Asia.

Aman Kaleem is a Hubert Humphrey Fulbright Fellowship’s India nominee, a Young India Fellow and has been recognized by the Government of India and United Nations as ‘Make a Difference Leader’, for her work in the South Asian region. She is a faculty at the Vedica Scholars programme, Aligarh Muslim University, and Jamia Millia Islamia University. Her latest documentary for Ministry of Information and Broadcasting called ‘Shaadi, Sex Aur Parivaar’ is currently being screened in festivals across the world.

I (Samarth Mahajan) am directing the project. I decided the treatment and style in consultation with Aman, and have been attending protests for over three months with Imtiyaz Ali, the cinematographer. This is Imtiyaz’s debut project, and he has given it all by putting himself in physically laborious conditions like the one I described earlier. (Samarth Mahajan is the Creative Director at Kahaani Wale. He is a graduate of IIT Kharagpur and Young India Fellowship. His debut feature documentary, “The Unreserved”, about Indians who travel in the General Compartment, will screen at Film Southasia 2017, Kathmandu. His previous films have won awards at multiple international film festivals and screened on more than 50 platforms). Imtiyaz Ali is the Creative Associate at Kahaani Wale. He’s a graduate in Literature from Deshbandhu College, Delhi University. He has a passion for the camera which he is putting to use for Hum Le Ke Rahenge, his debut project as a cinematographer.

Meenakshi Pareek is the Campaign Manager at Kahaani Wale. She is a graduate from St.Xaviers College, Mumbai and Young India Fellowship. She believes art to be the most powerful weapon to get voices heard and that has made her actively involved in Theatre. She is running the #AchhiLadki Campaign at Kahaani Wale, a campaign to reclaim and renegotiate the term to create an alternative narrative of what an Achhi Ladki is.

Tanvika Parlikar is the Business Development Associate at Kahaani Wale. She is a Young India Fellow and an alumnus of Sri Venkateswara College, Delhi University. Tanvika has been actively involved in theatre for the past four years. She has performed at theatre festivals like Thespo, Old World, and Atelier, across the country. And Thus Finally the Release Date…

The project comprises of a series of short videos which will release on our Facebook page and YouTube channel. We plan to release a short experiential video, focusing on one protest, every week. The videos will be supplemented by photo-stories and written accounts of what we experienced while we were shooting the protests. We are also working on a film, which will take some time to reach wider audiences.

The first step is to let the protesters’ stories be known. We want protesters to use the material we put out. The NREGA Sangharsh Morcha found our video quite useful. We are constantly in touch with the people at the forefront of these protests to ensure they are able to capitalize on our efforts.

So, that was Samarth Mahajan talking about this very intriguing presentation “Hum Le ke Rahenge”. We can’t wait for it to go online and we wish it meets with all the success. Until then, keep speaking up.!