[VoxSpace Selects] Chef : A Much Needed Fresh Breeze Of Air For Bollywood 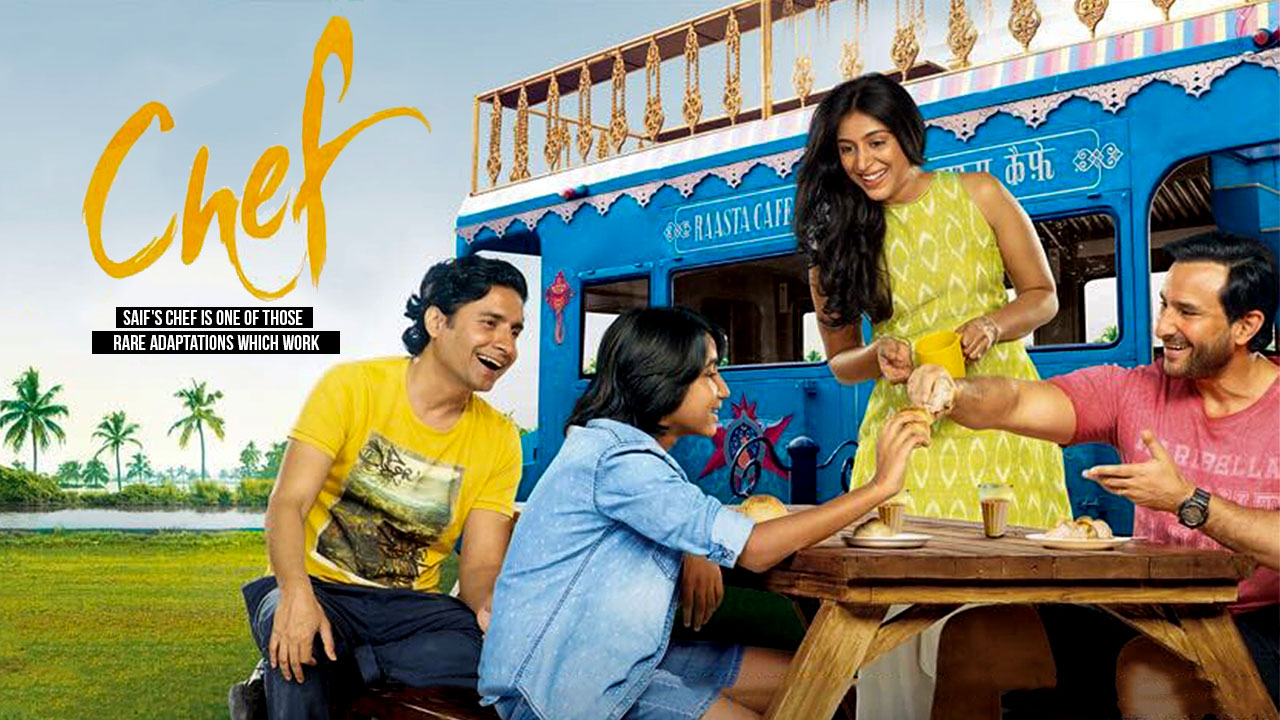 An Adaptation Of A Hollywood Flick ‘Chef’ Made Right

After a series of depressing big budget movies, we have Chef, an adaptation of a Hollywood movie by the same name. A journey mapping the distance between a father and son.

In Chef, Saif after getting fired for punching one of his customers decides to meet his ex-wife, where he realises he hasn’t done anything for his son till now. This is where he gets another chance to prove his worth. This comes in when he is given a chance to make use of a scrap truck. How he turns around his relationship with his son, using his passion for food, is what constitutes the movie.

What Truly Works For Chef In Avoiding The Stereotypes

Director Raja Krishna Menon strikes back with one more heartfelt story after the much acclaimed Airlift. He tries to narrate Chef as a father-son story and for the most parts succeeds in it. He perfectly manages to keep the food factor in the background instead of making it the central focus of the whole movie. And thus the whole movie is tastefully done with all the proper garnishing required.

So here’s a look at what I liked about the film:

The witty dialogues steal the show over here, Saif Ali Khan is in his prime form here. The signature Saif’s whacky way of delivery is a huge help. It’s not a blind copy obviously. Writers of Chef Ritiesh Shah, Suresh Nair and Raj Krishna Menon, beautifully blended the flavours of Kerala and Punjab. Some clever throwbacks to Saif’s movies also become a part of the movie. For this instance, The moment where the movie introduces Saif Ali Khan in Goa and all things Dil Chahta Hai was cleverly executed.

Scenic locations, the camera beautifully captures the landscape of Kerela from the backwaters to the house to the boat. Even the food – the Kappa, the Idi Apam, it’s going to make every Malayali, swell up with pride and take them down on a nostalgic trip.

It’s so interesting to see Saif Ali Khan, say Chetta or have the supporting cast mumble away some really funny Malayalam dialogues. Or even when the workers union make an appearance bringing to light some relevant problems that the state faces today. But is it just Saif’s show all the way. Definitely not. Now there’s Padma Priya, one of Malayalam film industry’s most accomplished actress. She takes on a rather pleasing personality to play on screen, although doesn’t challenge her limits of an actor, she holds the show whenever she onscreen.And then there’s the young Svar Kamble, who makes a charming debut as a young boy, who is craving for his father’s love and attention. And spoiler alert, a cool cameo in the movie, which is going to make a lot of women go weak in their knees. Saif makes sure that his boyish charm doesn’t take the prime shade here, as he for one of those rare times, comes off as a father of a young boy.

One of the most emotional sequences that stood out for me was at the dining table where three generations sit down for a meal and where you can see how food is an integral part of their lives and how it divides them.

Having spoken about its merits, let’s see where the movie doesn’t shine. Is the movie without its flaws? Not really the case.

A film which is about food has very little of it. The sights and sounds of food that we often see on YouTube channels or on Master Chefs or on Facebook, even that’s lacking and that’s quite unfortunate. The pacing of the director Raja Krishna Menon comes across as an issue. The pacing lets the story simmer, a little too long often making us yawn and get distracted. The quick transitions, there are sequences where there’s marriage failing and there’s chef that earns his worth, which deserved to be explored a little more.

The involvement of social media in the Original movie ( starring Jon Favreau) was quite missed in the  Indian version, which if added would’ve brought another layer towards establishing the core bonding. Even Saif, who is quite established as an actor, in here, it feels he’s done a lot of work on his chopping skills, and practically only that. Now this acquired skill of his shown way too often and nothing else compliments it. So much for being a skilful Chef.

At its heart chef is about a father and son relationship but there are some crucial ingredients that are missing that stops it from being a fulfilling experience. But still, a great heartwarming ride which we’ve missed in Bollywood in recent times.