[VoxSpace Selects] Solo : The Four Elements Of Nature And Bejoy’s Experimentation With Them 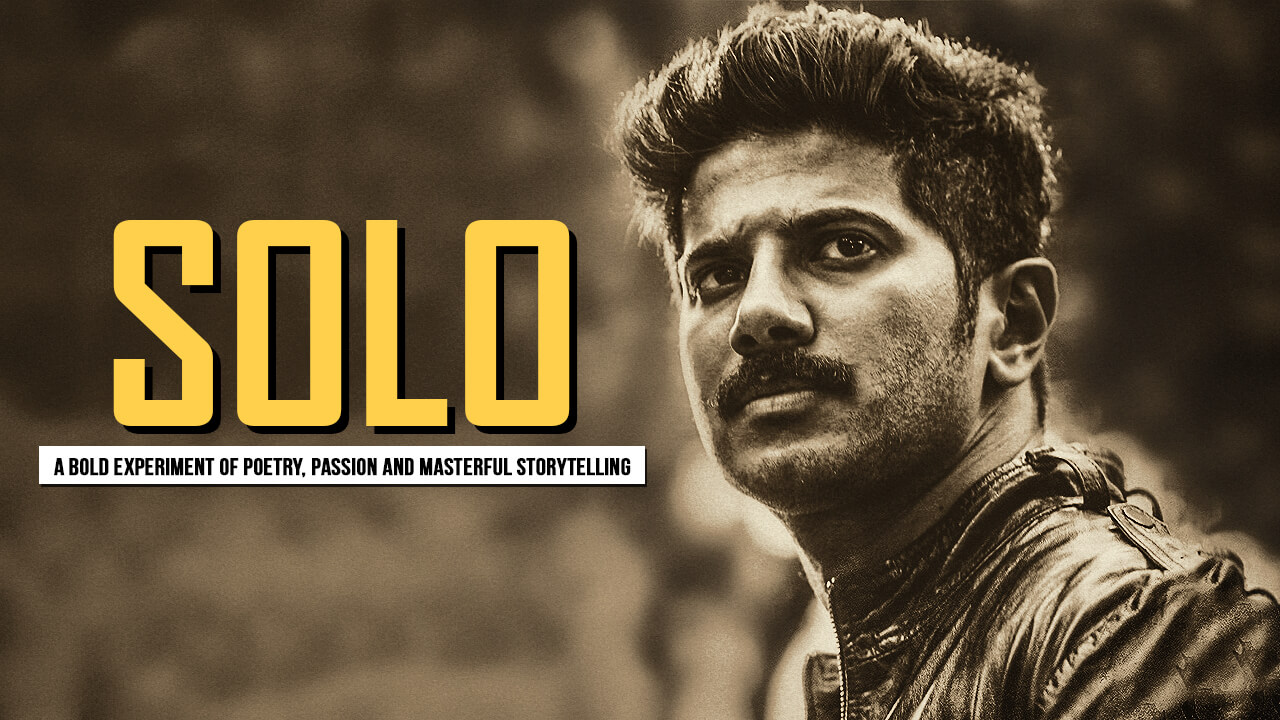 Solo – The Movie Which Paints A Canvas For Exciting Experimentation

After watching the promos, you enter Solo; thinking that it would give you an amusing interweave of four characters. Often more than not, when you expect so much from a Director, you get enthralled when he gives you something new, on an experimental level. However, the other times, these expectations not being fulfilled (even at the basic level) will leave you in distress trying to understand why the film has been made. Solo is an audio-visual anthology which will not cater to the major part of the audience because of the lacklustre it has for continuity. It took me more than 12 hours to actually realize what the maker was trying to say across the path. I also thought a couple of times  “The curtains depict the fragility of the room” for the “The curtains are fucking blue”, but here’s what I interpreted and had to write!

Solo is a collaboration of birth stories. All these stories speak about the fathers and how the fathers themselves or the boys are left alone for their own destiny. While the first two stories deal with the natural and the man-made accidents, the second two speak about the cause and effect phenomena. However, it’s the cinematography that keeps the movie intact as the Director, involves the landscapes, cityscapes, green lush, concrete world; basically everything. It has only become possible for him to add music of different dimensions at the situations, unrelated but needed; be it the Roshomon or the Singa Kutty (both are my favourite).

Solo has been compiled as four stories of four different men, their women, their families, their love and their loss. Yes! Before the introduction of each story, you will be given a narration about each element of nature.

The four elements are known to constitute the human bodies, balancing the cycle of nature. The five elements (including aether) are associated with the five senses and act as the gross medium for the experience of sensations. The base element, Earth, created using all the other elements, can be perceived by all five senses – (i) hearing, (ii) touch, (iii) sight, (iv) taste, and (v) smell. The next higher element, Water, has no odour but can be heard, felt, seen and tasted. Next, comes Fire, which can be heard, felt and seen. Air can be heard and felt. “Akasha” (aether) is beyond the senses of smell, taste, sight, and touch; it being accessible to the sense of hearing alone. (Extracted from Wikipedia).

The Story Of Shekar  (Representing Water)

A stammerer student as he is, his story starts with Radhika, a blind girl liking him. When asked as to how is he different from any other guy (given she is blind); she tells him that it’s his voice that catches her breath and that she has fallen in love with him. The resemblance of Shekar with water is shown when she says that he has the loudest voice even when he stammers just like the gushing sound of the water, her childhood love for the beach, her water dance explains the similarity between him and the water. However, it’s the love between Shekar and Radhika, in spite of having maladies, and sensing the person beyond the outlook, which made me fall for this story. Again *I love the Singa Kutty song*

The World of Shekhar:

The Story Of Trilok  (Representing Air)

A Veterinarian Doctor, whose wife gets killed, waits to take his revenge. As the poster says, he is calm, composed, wounded and clever. Just like the air, his presence is only felt and heard over the period. I loved how the plot is veiled first by keeping him invisible, just like the air, and later brings the audience to the realization that like air, he very much existed from the start. Here again, Bejoy inscribes the idea of intercaste marriage and how one can live beautifully irrespective of the family chaos, only interrupted by an accident, yes, again.  However, the story slacks in parts, and him explaining the revenge plot in mere words kills the thrill. The love between Trilok and Aisha is shown to be all fairy tale like, where there is a tomorrow land without pain, until the storm hits them.

The World of Trilok:

The Story Of Siva (Representing Fire)

Have you ever seen the fire rage in the eye? Fickle, hot-blooded, fierce and unstable; it can’t be touched, but can only be seen and heard. I personally liked Shiva’s character as it somehow reminded me of Mani Ratnam’s Nayagan (might be because of the setting, the characters or the similar backdrop). Dulquer has excelled his previous self by playing Shiva, with the enormous rage on the screen. A wild ride, as it starts with domestic abuse and infidelity between the mother and the father, it’s his father who becomes responsible for his life and the journey. Bejoy has drawn a Thalapathi moment, when Shiva brings a woman and her child to his shelter because of the love he has, as a father for the abandoned child. The heat between this woman and Shiva will hit you raw and desperate. Are you a cult fan? You will love this story.

The World of Siva:

The Story Of Rudra (Representing Earth)

The story of a military officer, Rudra; DQ has played it eloquently, only the character has been drafted in bits and pieces. As much as it is against the acceptance of many people, the core idea behind the story is about Genetic Sexual Attraction caused by the infidelity of his father. With the potential to come off as a disappointment, Rudra is shown as the Earth, because of how his presence is everywhere. But like the Mother Earth, he had to deal with everything, what everyone does around him. The scene between Suhasini ManiRatnam and him has taken the ship into space instead of keeping it in the sea, which is why most of the people had to leave the theatre with disappointment. The cute and teenage infatuation is shown well by the body language, gestures that both of them show; making it not much of a bad story at all.

The World of Rudhra:

The Brilliance Of Bejoy Nambiar In Solo

Bejoy has made a name for himself when it comes to experimentation and therefore if you’re in a mood to explore something entirely new, I guess this is a brilliant watch. On the other hand, a huge round of applause for Dulquer to even associate himself with this brave and utterly bold experiment. While Charlie and Kali stood out as his best performances till yesterday, the way he has enacted the four roles in a stellar way shows what an improved actor he has become. Just when we thought that he couldn’t get better, Dulquer elevated the four stories to different levels. I can still see flashes of those cruel cold eyes of Trilok behind the glasses, hear the stammering yet loud voice of Shekar, hear the unshouted rage of Shiva and feel the confused turmoil of Rudra. His screen presence has been exemplary or more than that. The women of Solo should be praised for adding the weight in each of the stories.

The Lasting Impact Of Solo

Each film is preceded by a short graphic of Shiva and a poem connected to one of these elements. You can find patterns and links in the film, which could have impacted better if at all explained in a legit way. Solo, on a whole, is made best if the director wanted to make it exactly the way it is. A story collaboration with its own rules and own worlds and three different variations in cinematography, it has experimentation written on each frame and is not everyone’s cup of tea. I personally thank, and in a corner of my heart also question Bejoy for bringing anthology into the Indian film format and for giving Solo for us.

Related posts:
Dhuusar - An Epic Biographical Journey Of A Juvenile Convict Brings Out The Best Of Humanity
[VoxSpace Review] Mallesham : Priyadarshi & Ananya Shine Through In This Relevant And Aspiring BioPi...
[VoxSpace Life] Remembering The Holocaust - Part One (1939-1945) : The Jews Of Auschwitz