[VoxSpace Selects] Bollywood’s Era Of Superstars- Beginning Of An End 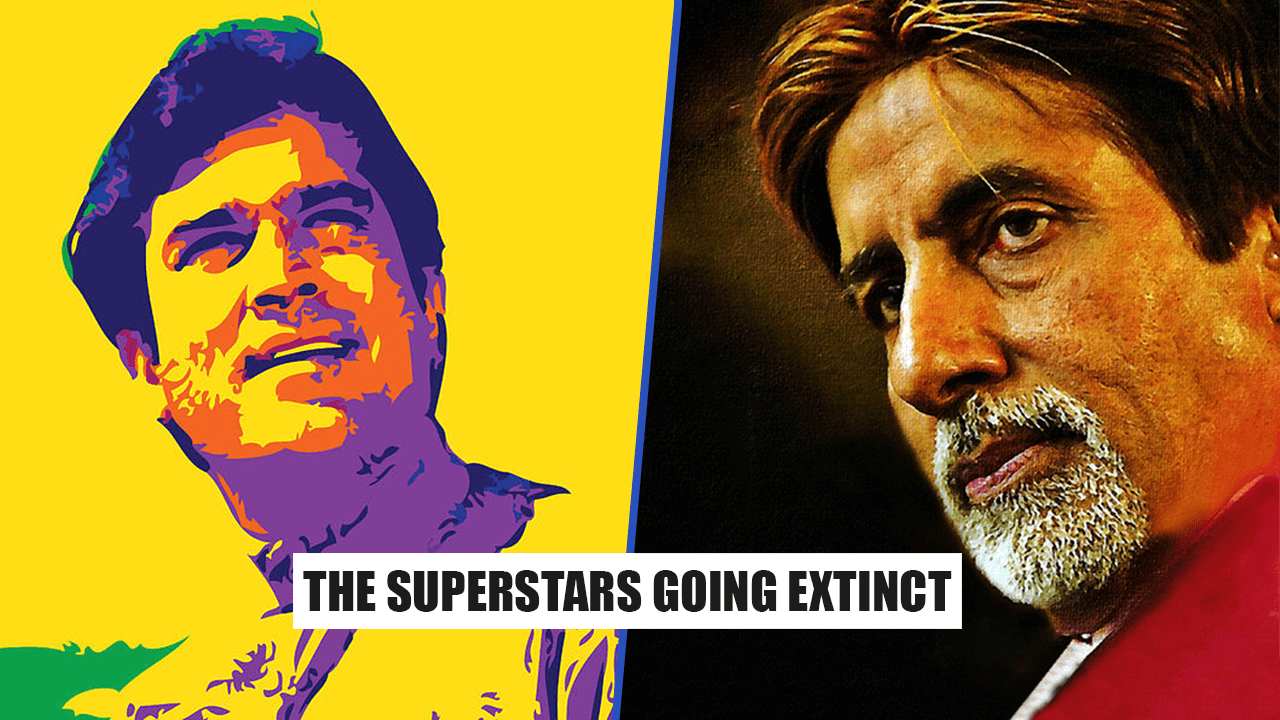 The Evolution Of Superstars Of The Yore

It all started with one man – Jatin Khanna. However, that shouldn’t make much sense because the history of cinema doesn’t remember this actor as Jatin Khanna, but as the legendary Rajesh Khanna, the first superstar that Bollywood ever saw.

The journey commenced with a talent hunt contest, Filmfare-United Producers Talent Contest. This was nothing like the plethora of talent hunt shows that we come across these days on television. In the young days of Bollywood, the crème de la crème of the industry, which includes venerable names like BR Chopra, Bimal Roy, GP Sippy, HS Rawail, Nasir Husain, J. Om Prakash, Mohan Saigal, Shakti Samanta and Subodh Mukherji, came together to form what would be then known as the United Producers’ Combine and decided to host a Talent Contest. The actor, to win this competition, was rolled out a golden carpet into the Mumbai studios and he was to star in a lead role in one film made by each of these stalwarts.

The winner of this contest was Jatin Khanna, later rechristened as Rajesh Khanna, who, at that point, probably didn’t even have the slightest idea of what dizzying heights he was going to achieve and that he would become a demigod among men and cause much grief to his colleagues.

The Legacy Of Rajesh Khanna – And The Birth Of Superstars

He was one man, whom fans adored on the silver screen. The movies like Aradhana, Doli, Bandhan, Ittefaq, Do Raaste, Khamoshi, Safar, The Train, Kati Patang, Sachaa Jhutha, Aan Milo Sajna, Mehboob Ki Mehendi, Choti Bahu, Anand and Haathi Mere Saathi achieved a cult status in the history of cinema. However, the silver screen is a fickle space and following an illustrious career marked with platinum jubilee and golden jubilee hits, words which you don’t get to hear very often these days, “Babumoshai” slowly started to ebb away. The king ended up giving his throne to the next superstar, one whose legacy continues till this date. It was Amitabh “the angry young man” Bachchan, who incidentally, was once rejected from the Hindi film industry for his deep baritone voice and that enviable height.

Amitabh or Big B’s career has also seen all kinds of highs and lows. At one period of time, it appeared that there was nothing that could tamper with his successful run. He was one star, on whom producers doted and directors queued to get his dates.

In 1999 he was voted the greatest star of stage or screen by BBC News Online users. The charisma that he oozed out on the silver screen was hard to ignore, therefore, the entire nation was enamoured by the Big B phenomenon.

However, gradually things started getting sour for him.

The actor, who rose to prominence with Deewar and Zanjeer and following a severe injury while shooting Coolie had a stampede at the hospital by worried fans, bit by bit started losing his grasp over his empire. Added to that was the economic breakdown that he faced due to the failure of his event management and film production company, Amitabh Bachchan Corporation in 1995.

The Twist Of Destiny – The Fall And Rise

Fortunately, he bounced right back into the fray as a quiz master for the Indian adaption of ‘Who Wants To Be A Millionaire’ Or Kaun Banega Crorepati. Following the show, the angry young man of yesteryears turned himself into a patriarch and a strong supporting character, who would add gravitas to a movie instead of carrying it on his own shoulders, like he did so many times before.

Then came the next bunch of actors, who got a share of the adulation that has been part of the superstar legacy – a young lanky fellow with an untidy mop of hair, spreading his hands to become the heartthrob of Bollywood, an actor who would claim the mantle of “the perfectionist” by taking radical moves and risks, a gawky man whose presence on the screen is enough to send the cash registers ringing and last but not the least the’ jamai raja’ of the first superstar of India. Yes, I am talking about the Shah Rukh Khan, Aamir Khan, Salman Khan and Akshay Kumar, respectively.

Although these superstars still command a decent box office opening, with time it is gradually ebbing and somewhere time itself is becoming the factor. This November, Shah Rukh Khan will turn 52, in December Salman Khan will be 51, Aamir Khan is already 52 and Rajiv Bhatia or popularly known as ‘Akshay Kumar’ recently turned 50.

When an industry is still running on the shoulders of leading men who are in their fifties, it’s time to admit that there is a problem. With the limited shelf life that these superstars are left with, soon the roll call would begin for new actors to take in the mantle.

One may argue that today content is the king and script demands actors and not superstars, but the truth remains that the box office still demands returns and if the money stops pouring in, the silver screen will slowly start to lose its tarnish.

The Inadvertent Dearth In Finding The Next Superstars?

A movie is not only for the educated cinema goer, it is also for the wide-eyed dreamer sitting in the single screen theatre craving to see a larger than life persona. Then again, maybe when the seats are finally empty, we would no longer need superstars, we would rely on the script or on the director’s bankability. However, these are all open-ended assumptions and a peering into the unknown. What is concerning at this point is that, has Bollywood matured enough to stop its reliance on superstars? Because the clock is ticking on these actors and the need for entertainment will never subside. Admit it, the Khans and Kumars have become the superstars of yesteryears and Bollywood has not given birth to the next one or, perhaps, we the audience have not.

Yes, Ranbir Kapoor, Ranveer Singh, Arjun Kapoor and all the young blood of Bollywood have quite a huge fan base. But superstar? We cannot probably call any of them that.

It’s, perhaps, time to think of alternatives for new superstars to emerge, because a country of millions is still on the lookout for its next big superstar and if not possible, a suitable direction towards things. However, what remains certain is that the adulation that Rajesh Khanna or Big B received in their heydeys would be hard to come by. Maybe it had something to do with the aura of mystery that they had wrapped around themselves, while the modern generation actors, in a bid to be millennial-friendly, are quite easily accessible with all the gadgets and social media tools. That’s one story which needs to be told.