[VoxSpace Selects] Gulzar : Because Beauty Of Words Refuses to Fade Away with Time 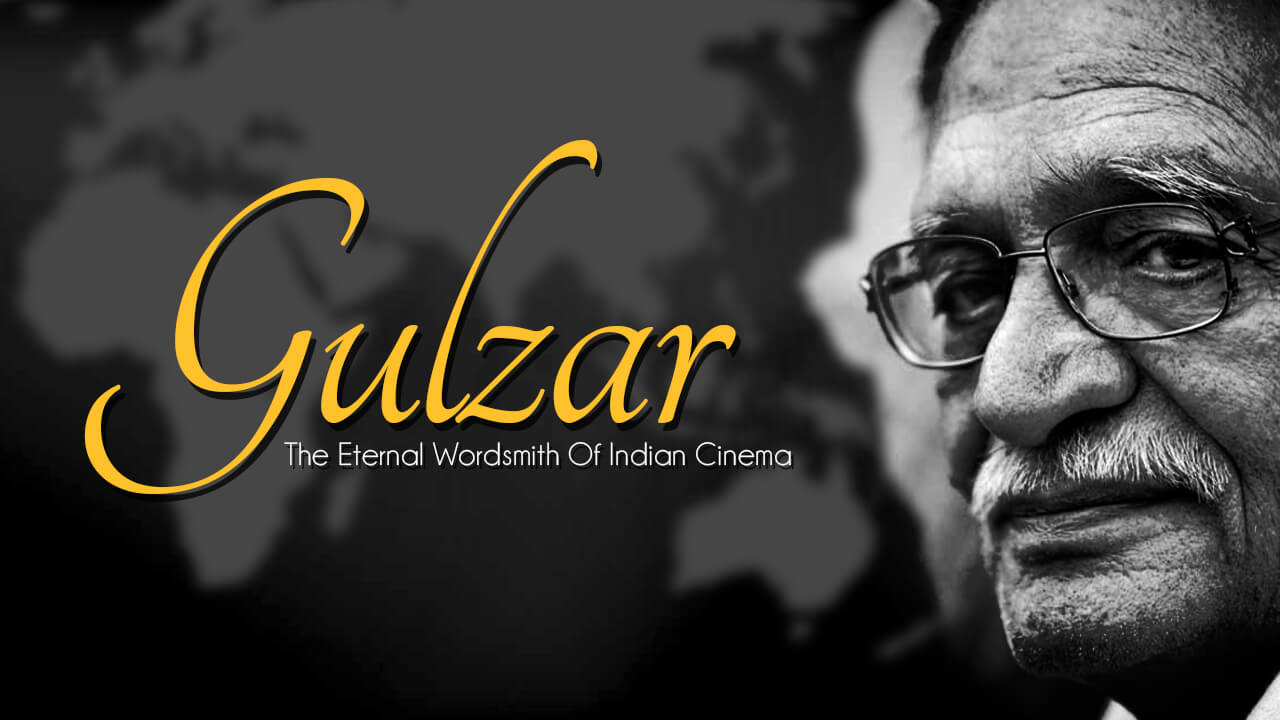 When A Modest Writer Became The World Renowned Gulzar Deenvi

Sampooran Singh Kalra decided that he would write under the pseudonym or pen name of Gulzar Deenvi. Over the years, Deenvi vanished and what was left was a rich body of work and a name to which Indian cinema remains indebted to. In an era of movies, where song lyrics of popular cinema’s go like “Aj blue hai pani, pani, pani” and “Char bottle vodka, kam mere rozka,” it’s time to go back to an octogenarian who is still holding the fort with the might of his pen and bringing in some sense to the chaos.

Gulzar was born in the pre-independence period. Post partition, he landed up in Delhi. Being a strapping young man he joined Bimal Roy, one of the stalwarts of those days, who in his career has made movies like Do Bigha Zamin, Parineeta, Biraj Bahu, Madhumati, Sujata, and Bandini. Bandini is also important in this story because it was in this movie that Gulzar made his mark as a film lyricist.

He wrote a line, which probably can cause some ire today but back in the day became a stupendous hit. It is remembered by many till this date – “Mora gora ang lai le, mohe shyaam rang dai de, Chhup jaungi raat hi mein, mohe pee ka sang dai de,” a song which was sung by Lata Mangeshkar and was scored by Sachin Dev Burman.

It would be pertinent for the reader to mark the year, it was 1963 i.e., 54 years ago. Stars of that era, such as Nutan, Ashok Kumar, Bimal Roy and SD Burman have all left us, Dharmendra makes brief appearances every now and then but Gulzar is still here, still creating magic.

The Origins of A Legacy Called Gulzar

Let us take a brief jump and come to 1971, where two stars collided. One was the reigning superstar of the day and other was a young upstart who would write the history of Indian film industry with his own hands. The name of the movie was Anand and the stars about whom I am talking about are Rajesh Khanna and Amitabh Bachchan. This movie is a landmark of Indian cinema and Gulzar played a significant role in the story. Everybody remembers the iconic lines from the movie, “Babumoshai, zindagi aur maut uparwale ke haath mein hai…”. However, what very few know is that these lines were written by Gulzar. He also penned a heartfelt love ballad in this movie, which was equally popular, “Maine tere liye hi saat rang ke sapne chune, sapne sureele sapne.”

Now, let’s move on to 1978, a different wave had come all together, marked with actors and directors that were making movies for the middle-class audience, a celebration of our daily triumphs and tribulations. Basu Chatterjee made movies like Chhoti Si Baat, Chitchor, Baton Baton Mein and Khatta Meetha. Rakesh Roshan had starred in Khatta Meetha and the music composer was Rajesh Roshan and who better to write about the common man but Gulzar?

The man in his personal life was a man of frugal habits and timid mannerisms, so much so that Rakhee Gulzar, his wife and an established actress of her day said to him “Agar aap shaayar na hote, to bade hi ordinary hote.”

A Friend Called Time And The Story Of The Words Wanderer

The years are fleeting by at a breakneck speed and Gulzar’s resilient in his inimitable way keeps on gauging the whims of the day. It would be unfair to call it his most fruitful time, but, perhaps, no other composer for a long time did more justice to him and his words than the son of the man who composed his first break out song.

RD Burman and Gulzar had created magic and the sparks were evident from movies such as Parichay in 1972, with the song “Musafir hoon yaaron na ghar hai na tikhana” or “Tere binazindagi se koyi, shikwa, to nahi, Tere binazindagibhilekin, zindagi, to nahi” and “Tum aa gaye ho noor aa gaya hai…Nahi to chirago se lau jaa rahi thi” from Aandhi in 1975. Then songs from the Naseeruddin Shah and Shabana Azmi-starrer Masoom in 1983 and Ijaazat in 1987 with the famous song “Katra katra milti hai, Katra katra jeene do, Zindagi hai, zindagi hai, Behne do, behne do, Pyaasi hoon main pyaasi rehne do.”

Gulzar kept on delivering lyrics for one hit song after another, and the other with milestones, such as “Dil Hoom Hoom Kare” for the movie Rudaali with composer Bhupen Hazarika. Another movie that also marked the beginning of another poignant relationship in his career was Maachis. It was also directed by him and even today its songs “Chappa chappa charkha chale” and “Chhod aaye hum woh galiyaan” can be heard echoing through time,the composer was none other than Vishal Bhardwaj.

We are now entering the 2000s; Gulzar had managed to meld himself according to the needs and emerged as the voice of the day. The hero of the day was then Hrithik Roshan and the composer, Anu Malik. In the movie, Fiza Gulzar penned down songs like “Tu fiza hai” and “Aaja Mahiya”. He then moved on to Asoka by Shah Rukh Khan and created “O re kaachi, kaanch ki gudiyaa, hothon me baandhe prem ki pudiyaa.”

In 2005, Gulzar again flexed his muscles to let those, who doubted him, know that he was not done just yet. In the movie, Bunty Aur Babli one song would define Gulzar’s mischievous spirit and his ease of juggling words with élan. In “Kajra Re” Gulzar goes, “Aankhein bhi kamal karti hain, personal se sawal karti hain, palko ko uthati bhi nahi hain, parde ka khayal karti hain.” Added to that was the dynamic presence of Senior Bachchan, Junior B and Aishwarya Rai, the yet to be Bachchan and we had the so-called ultimate “item song,” which titillated, but was not vulgar. It maintained a playful yet upbeat mood throughout.

Movies like Jaan-E-Mann, Jhoom Barabar Jhoom, Guru, Yuvvraaj, Billu Barber, Raavan followed in the consecutive years. Gulzar was not done; he was simply biding his time to rejuvenate himself and give voice to the modern day aspirations while not compromising on the quality that he had maintained since 1963.

The Worldwide Phenomenon Flowing Down From Gulzar’s Pen

“Aaja, Aaja jind shamiyane ke tale, Aaja jariwale nile aasman ke tale” from the song “Jai Ho” in Oscar-winning Slumdog Millionaire, which gave A.R Rahman his tryst with the Oscars, came from Gulzar’s pen. Gulzar after all these years probably needed another kindred spirit that would let him fully explore the modern times. He had lost RD Burman but gained two strong admirers. One was A.R Rahman, who time and again has approached the maestro to create magic; however, at the risk of being biased.

The other one was Vishal Bhardwaj. Bhardwaj is, perhaps, the one who has utilized his travesty of talents more fruitfully. Gulzar and Vishal Bhardwaj have worked jointly in roughly 19 movies and each of them was an audiophile’s dream. Dedh Ishqiya, Ek Thi Daayan, Matru Ki Bijlee Ka Mandola, 7 Khoon Maaf, Striker, Ishqiya and others have a lyrical and music alliance that’s a joy to listen to.

A wonderful interplay of masterful lyrics with poignant music and the results are marvellous. One is hard-pressed to pick favourites. Whether it is “Darling aankhon se aankhen chaar karne do, Roko na roko na mujhko pyaar karne do” from 7 Khoon Maaf or Haider’s “Bismil bismil bulbul-e-bismil..Mat mil mat mil gul se mat mil…” this duo has always held each other and created timeless music.

Gulzar is akin to a river, a river that has been meandering through Hindi cinema’s history and making everything it touches into a flourishing valley. The octogenarian, whose career spans over eras of actors, composers and every major landmark that Indian cinema has touched, doesn’t believe in slowing down because he still has a lot to give and create. Every year, we would add a new chapter to the glorious life and work of a very young lyricist at heart and that, indeed, is a wonderful feeling.