To Conundrum Of Marriage : I’m Terrified Of Getting Married And These Are The Reasons Why? 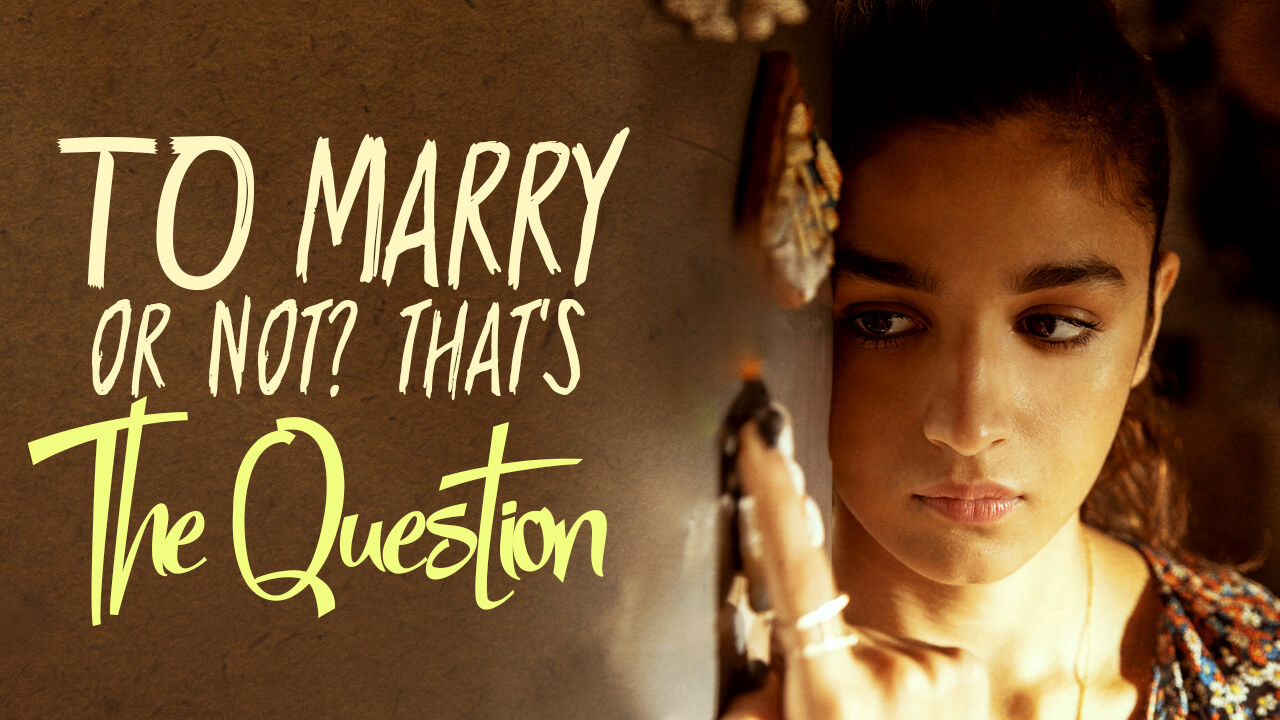 The (Supposed) Existing Reasons For A Fruitful Marriage

Why do people marry in the first place? For love? For companionship? For sex? Or just to tick that married box on forms? I doubt it’s the last one for anyone though. But in all seriousness why do people marry? Arranged or love? I don’t understand why people opt for either. I don’t even know which one is the lesser of both evils. For me, I’m terrified of getting married.

Deciding who to spend the rest of my life with, when I can’t even decide what I want for lunch is a bad idea. A very bad idea.

But then, everyone seems to be doing this bad idea. Either being pushed into it or willfully doing it. Why though? Because social norms dictate us to do so? Or else everyone’s going to judge you? Or are you afraid to die alone? Can’t be the ‘Sex’ part. That has become way too easy. You don’t have to even pretend to love someone. Hello, Friends with Benefits and No Strings Attached.

I happen to love both the movies. That was Ashton Kutcher before he ruined Two and a Half Men for everyone. And Justin Timberlake. Hotness Personified. They were emotionally unavailable and had commitment issues and still managed to find love? How? Fiction, that’s how. That’s not how it works in real life.

The Reality Check – The Innate Need To Marry

Marriage is a lot like a full-time job. You need a commitment from both the sides. Now that doesn’t come easy. Does it? Cheating has become way too easy too. I know not everyone does it. No one intends to do it either or maybe some do, but most of them don’t and that’s heartbreaking. That something that can be easily avoided isn’t. Is the other person to blame or your partner? Or the moment or the alcohol?

I remember watching this show couple of years back. There was this quote “All men are wired to cheat.” It was something on those lines and come to think of it, I don’t think this quote is gender-specific. They were generalizing mankind in it. Because let’s face it. Women cheat too, and when they do it, they do it more devastatingly than one can even imagine.

The Daily Emotional Turmoil Of Marriage?

If we leave aside the cheating aspect (which we shouldn’t) there’s emotional, verbal, physical and sexual abuse. Countless incidents registered on a daily basis and even more go unheard. Now that’s really sad.

Emotional abuse is just as bad as physical abuse. Only if people understood that. A lot of them are silenced and involve in victim blaming. It’s your fault. No, it’s NOT your fault. It never is.

Physical abuse. Being abused either way is bad. There’s no doubt about it. It’s sad when the husband hitting the wife is considered abuse and a wife hitting or emotionally abusing the husband isn’t. In fact, people find humour in it. Well to all those people- Abuse is abuse. It’s not gender-specific.

Sexual abuse. Well you know marital rape exists right? And there’s very little anyone can do about it. You know according to Section 375 of the Indian Penal Code forced sex in marriage is considered rape only if the wife is below 15. But isn’t child marriage a crime as well? Isn’t the legal age to be married is higher than that? I don’t know which one angers me more.

I get it, I’m just talking about the dark side of marriage and there’s a brighter side too. Yes, lucky you, to have found a decent enough human being. Kudos. But the statistics otherwise are alarmingly high. And we should talk about it. We have been silent for far too long.

Do You Really Need A Restrictive Marriage?

Some people stay in abusive marriages just for the sake of kids. Really? Is it really because of kids? Or are you too afraid of being left alone or are you too used to the abuse that you’ve grown fond of it? Yes, that happens too. No one should be treated badly just because you are married to them. No, your parents taught you wrong when they said compromise and put up with whatever. They didn’t mean abuse. Put up with them if they’ve lost their job, they are sick and dying. Yes, compromise there. Put up with all of it there. Not abuse and if they meant abuse. Then sorry to say this but they are the reasons for your miserable lives.

The thought of living your life with someone is already so overwhelming, without all these reasons butting in and making it worse.

The kids that were so happy pretend-playing house. The kids that grew up imagining their wedding day are just growing up and facing the reality that it’s not all rainbows and butterflies, that it’s compromise and pain. But are everyone ready for it? And moreover, it’s not giving that, taking it as well?

The Confusion Of Familiarity – Perhaps That’s A Reason?

There are a lot of people trapped in loveless, sexless marriages. Why? Because they confuse familiar with better. That since we have put up with so much let’s drag it a little longer. Till we die… unhappy and not feeling loved.

Is familiar really better? And for whose sake are we doing it exactly? The society? The society that’s hell bent on victim blaming and hardly ever cares about justice? They always want juicy tidbits to talk about. If it isn’t about you, it’s about some other helpless soul. People are cruel that way. The universe is cruel that way.

Oh, I don’t blame the universe, for it, we are just a tiny speck of dust, perhaps even smaller. Yes, we are that insignificant to it. But for ourselves, we matter right? Self-love, self-image, self-respect? They are not just words thrown out of the dictionary. They mean something right? Don’t lose out on that fearing that you’ll be left alone. It’s any day better to feel alone than lonely in a loveless marriage.

Never Ever Do These Things In Your Marriage

Do whatever you want, but never rationalize the abuser’s actions. NO, that’s NOT how it’s supposed to be and NO, that’s NOT how it’s with everyone. Yes, everyone has their own demons, but there’s a difference between having these monsters inside the closet and having it out in the open, especially onto another person. That’s never nice. That’s not even okay.

Coming back to the people who stay for their kids! Do you realize what kind of role models you are being for them? Let me explain this through a popular psychological experiment by a famous psychologist Albert Bandura. It’s the Bobo doll experiment. In this experiment, The children are in two groups. Both the groups of children were shown 2 different adults and bobo dolls. One playing with it and the other hitting it. Guess what they did with the bobo dolls when they were given to them? Guess guess. You’re smart enough!

Similarly, your children, your beloved children are going to observe and learn the same damn thing. They are either going to observe and learn the abuse part or the part where you decided to stay silent and put up with abuse. Is that what you want for your children? Making a mistake and rushing into things is alright. No one can foresee the future events. But do see the red flags in the ‘honeymoon’ period before it’s too late.

People are so afraid of dying an old maid, a spinster of some sort. That they are ready to get with whatever comes their way. Learn to be self-reliant, self-fulfilling. Independent. If you can’t do it on your own what makes you think you can do it with someone else. Or are you going for the popular saying – Misery loves company?