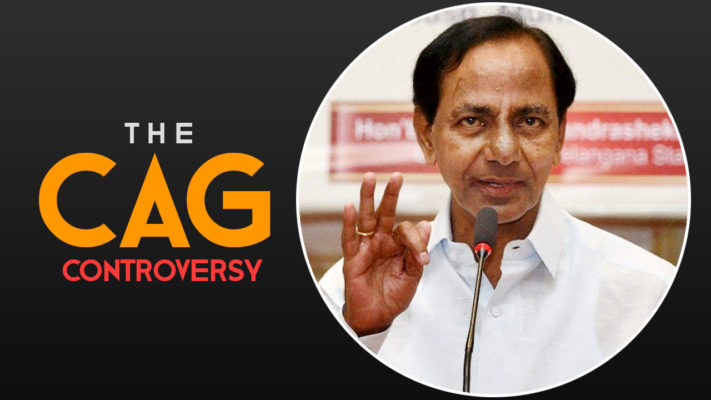 The Comptroller and Auditor General of India (CAG) report at the end of fiscal year of 2017 on the state of Telangana (TS) has ignited a political debate on the Government’s performance and powered the opposition parties to corner the ruling Telangana Rashtra Samithi (TRS) party over the shortcomings cited in the report.  In conformity with article 151 of the constitution of India, the CAG has already submitted the audits of the state government to the governor E.S.L. Narasimhan on Monday, April 2nd, 2018 which enables to him to submit it to the state legislature.

In accordance with the CAG, with the lopsided accounting practices of the state, it registered a revenue surplus of Rupees 1,386 crore. The government later revised estimates of the financial year 2016-17, reported a revenue surplus of Rupees 199.4 crore, but CAG denied all the claims and articulated that the state of Telangana is in revenue deficit by a humongous amount of Rupees 5,392 crore. The Finance Minister asserted during the 2018-19 budget presentation has deliberate reiterations regarding the State Government’s fiscal deficit, which was within the Fiscal Responsibility and Budget Management (FRBM) Act, but CAG unconditionally denounced the statement.

Here Are A Few The Highlights From The Report:

The State’s Losses And Expenditures

CAG is dissatisfied with the state’s performance in revenue expenditure and returns. It reported that more than 60% of the revenue was spent on consumption and less than 35% on the infrastructure and asset generation. It is estimated that state has to repay a hefty amount of Rupees 56,388 crores in next 7 years. CAG said that poor financial management has crippled the revenue surplus of the state. An approximate amount of Rupees 10,873 crore in almost 28,000 personal deposit accounts is static without earning any interest and the government ended up borrowing the same amount at high-interest rates. “ The delay in the filing of Aggregate Revenue Requirement (ARR) for 2016-17 had resulted in a revenue loss of Rupees 324 crore “, the report pointed the losses incurred by the state.

CAG took a dim view regarding the construction of T-hub and IMAGE (Innovation in Multimedia, Animation, Gaming and, Entertainment) towers. It disapproved the practices opted by the state in approving the bidders and stated that they are inefficient in terms of usage of monetary resources. The bids consideration of the construction firms should be determined based on the qualifying marks of technical proposals. CAG identified that firms with greater than 75 marks are not selected but firms with relatively inadequate scores were selected to open their financial bids, and the state has no reasons documented for its selection of the company to erect the Phase II of towers.

The report from CAG enumerated the flaws of GHMC on distinct aspects of the administration. It emphasized on the nonfulfillment of guarding its water bodies and application of rules framed in the best interest of people. Nine lakes got encroached and seventeen lakes were out of the scope of the documents to identify them. Among the 12,182 illegal alterations of water bodies in the city, only 842 were fixed. The inefficiency of the GHMC led to the proliferation of construction against the building rules. The ramifications were evident in the monsoon with flooding of low-lying areas.

GHMC has been faulted by CAG with tax arrears in residential and non-residential areas of the city. As of March 2017, more than 60% of the taxes are yet to be collected by the corporation authorities. Almost 178,000 estimations were pending since three years. The lack of sync between Town Planning authorities and Revenue wings has rendered wrong calculations of the arrears and triggered significant loss to GHMC.

The CAG also described the disorganization in solid waste management by GHMC. The segregated waste collection from the primary waste generators is less than 30% and the sloppy system of waste segregation is eventually turning into an extra burden for landfill sites across the city. The establishment of waste-to-energy plants are prolonged due to unresolved land issues and the current proposals of the new plans are yet to constructed by the organization.

Telangana, although a novice state, is well known for its revenue surplus and generous freebies to farmers and minority sections of the state. It has become a role model with its policies to provide uninterrupted current, fertilizers and, investment to farmers. Now the CAG’s deployment of empirical facts about the performance of the state is definitely an eye-opener to its people, administration and rest of the country about how amending the numbers can lead to false estimates and hinder the development.