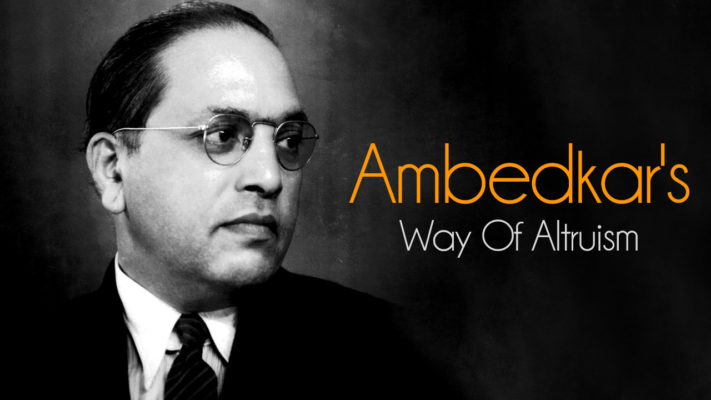 ‘Manusmriti’ is the written code of conduct for Hinduism which was compiled roughly around 1000 BC. Ambedkar equated it with the Bible and analyzed it critically in order to explain the gross injustice and inequality which is inherent to Hinduism. According to Manusmriti the duty of a Shudra was to serve the other three Varnas, which were annotated higher positions in the Varna system. A Shudra was not allowed to accumulate any wealth so as to discourage them from rebelling against other castes and to make them dependent on the mercies of other varnas. A Shudra was prohibited from gaining education and could not intermarry or dine with other communities. There were written set of rules which were meant to keep the Varna System intact and to punish those not following these diktats. Ambedkar duly notes that “Religion must mainly be a matter of principles only. It cannot be a matter of rules. The moment it degenerates into rules, it ceases to be a religion, as it kills responsibility which is an essence of the true religious act.”

Ambedkar tried to analyze the character of Rama in the chapter titled ‘The Riddle of Rama and Krishna’. He begins by stating that Ramayana is ‘simple and in itself, there is nothing sensational about it’. He then tries to trace the birth of Rama as well as Sita and also mentions that both were brother and sister born from Dashratha, according to the Buddha Ramayana. It’s necessary to inform the readers that scholars and historians accept the presence of almost 300 different versions of Ramayana. The Ramayana written by saint Valmiki is, however, the most publicized version as it appeals more to the Brahmanical narrative.

Ambedkar criticizes Rama on the basis of his personal life as well as his tenure as the king. Firstly, he criticizes the treatment meted to Sita by Rama. He questions the morality of Rama’s decision to subject Sita to Agnipariksha or the test by fire, in order to prove that she was pious. After Sita passed this test she was disposed of in a matter of months when residents of Ayodhya allegedly started questioning her sanctity. She was left in the woods to fend for herself while she was pregnant. The ordeal of Sita didn’t stop here as Rama again ordered her to prove her purity after 12 years when Rama accidentally met his sons Luv and Kusha. Sita, however, refuses this and chooses to die by burying herself in the earth. Secondly, Ambedkar cites the example of Bali to show how Rama resorted to treachery in order to help Sugriva-his aide usurp the throne.

Lastly, he brings to light the casteist nature of Rama by narrating the incidence of Sambuka. Sambuka was a Shudra who was assassinated by Rama for the crime of performing tapasya (ascetic exercises). The son of a Brahmin died an unnatural death and Rama was called upon to avenge his death. Upon investigation, he traced the reason for this death to Sambuka, who was going against Dharma by doing tapasya and slaughtered him for the crime of worshipping. This act of attaining salvation was only reserved for the ‘twice born’ or upper castes. The Shudra’s duty was only to serve the other Varnas and Sambuka allegedly went against Dharma by trying to gain ‘admission into the celestial abode through the power of the tapasya he had no right to perform’.

Ambedkar was a strong proponent of the theory that Political equality was futile until and unless it is accompanied by Social and Economic equality. The Untouchables, who were considered to be outcasts, mostly bore the brunt of the caste system. They were denied basic humane treatment and Manu went as far as describing them to be people born from illicit relationships. After a great deal of painstaking research, Ambedkar concluded that there was no way by which he could ensure equality for fellow Dalits and Untouchables within Hinduism.  He eventually converted to Buddhism stating that “Though, I was born a Hindu, I solemnly assure you that I will not die as a Hindu”. The logic he provided for converting was “If you study carefully, you will see that Buddhism is based on reason. There is an element of flexibility inherent in it, which is not found in any other religion.”  Thus we can safely conclude that Babashaheb Ambedkar was ideologically against the politics of BJP/RSS which aims to establish a ‘Hindu Rashtra’. The step taken by the UP government to add ‘Ramji’ in Ambedkar’s name is nothing more than a mischievous step to fuel its propaganda for the construction of Ram Mandir in Ayodhya.