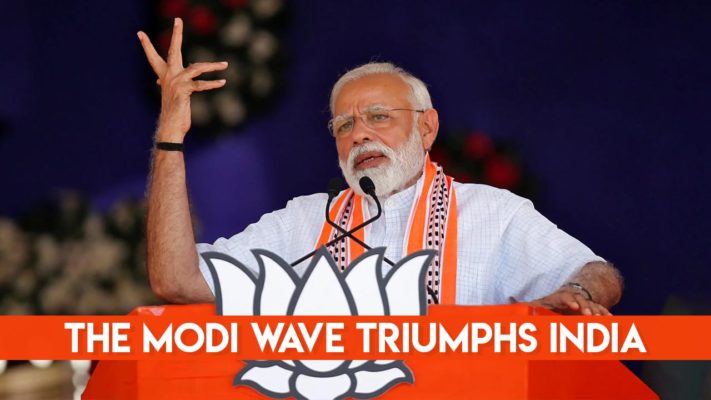 The world’s biggest democracy has spoken for the “national hero” right now, the face of the Bharatiya Janata Party(BJP), the one man who has become the face of a Hindu Nationalism ideology from 2014 and has swayed the Indian masses with a Modi wave, or perhaps even a tsunami. With the official counting of the votes getting over on Friday, May 24, 2019, the NDA bagged 352 seats out of a total of 543 seats with the BJP single-handedly winning in 303 constituencies!

The resolution to dissolve the 16th Lok Sabha has been passed and soon the party is to anoint its ministers for the upcoming tenure. The Congress party with 52 seats, though managed to secure a better number than 2014, still fell short of the number required to claim the post of the leader of the opposition. With Mr. Narendra Modi being such a strong face as a contender in front of Rahul Gandhi as the face of the opposition, the results have not come as a surprise to academics and poll experts. If the elections of 2014 showed an Indian voter’s resolve to quash dynasty politics and the rule of the elite, the elections of 2019 show an Indian voter’s acceptance of the ideology of Hindu nationalism that they voted to power.

The Tsunami That Shook The World

The tsunami has not only taken the Indian nationals by storm but is also being referred to as the biggest exercise of democracy in the world. With a voter turnout of 67.1%, almost 600 million of the 900 million eligible candidates came out to exercise their voting rights. The Vice-President of the US, Mike Pence calls these elections (where one-eighth of the world’s population came out and voted) an inspiration for the whole world. Within a day of BJP’s win, Narendra Modi received well-wishes from various world leaders like Donald Trump, Israeli PM Benjamin Netanyahu, Mahmoud Abbas(Palestine), Xi Jinping(China), Abe Shinzo(Japan), Vladimir Putin(Russia), Emmanuel Macron(France), Scott Morrisson(Australia), Sheikh Hasina(Bangladesh), Imran Khan(Pakistan), Maithripala Sirisena(Sri-Lanka), Ashraf Ghani(Afghanistan), etc. Putin was one of the first to call to wish the re-elected leader of the long-time ally.

Even the leaders of the other countries talked about strengthening partnerships and working together towards peace and prosperity. The UN Secretary General Antonio Guterres reached out to Modi via spokesperson Stephane Dujjaric about working together towards issues like climate change. Pakistan PM Imran Khan extended a proposal of working towards peace and prosperity to which his Indian counterpart replied on the affirmative. Ever since Modi’s attempts at international policy advocacies like the Masood Azhar blacklisting or the Balakot air-strikes, it can be said that the whole world awaited this outcome.

Dynasty Politics Versus The Fakir

The face of the opposition seems bleak where there is news of Rahul Gandhi offering to resign in a Congress Working Committee meeting to be held on Saturday, 25th of May. UP Congress Chief Raj Babbar and Odisha Congress President Niranjan Patnaik already announced their resignations from their respective posts after their humiliating defeat. The most talked about constituency was Amethi where Rahul Gandhi was contesting against Smriti Irani of the BJP. Rahul lost to Smriti Irani but won a seat in Wayanad.

However, Sonia Gandhi managed to keep her seat at Rae Bareli where she has been contesting from since 2004. Even the Congress wild card entry of Priyanka Gandhi as AICC general secretary didn’t seem to work. Amidst her rallies around Varanasi interacting with BJP supporters and gaining admiration, Narendra Modi still secured his seat there. According to the India Today-Axis My Nation exit poll, the UPA failed to woo voters across demographics!

Narendra Modi’s return to power has been hard on other opposition parties as well such as Akhilesh-Mayawati’s SP-BSP duo or the Mahagatbandhan. Akhilesh Yadav has allegedly fired his party spokespersons after their alliance only bagged 15 seats as opposed to BJP’s 62 out of the total 80 seats. BJP even made a grand entry in West Bengal by winning the party’s biggest victory in the state yet, with 19 seats as opposed to Mamata Banerjee led TMC’s 22. In Bihar, the Modi-Nitish Kumar-Ram Vilas Paswan trio won 39 out of 40 seats wiping out the main opposition Tejashwi Yadav’s Rashtriya Janata Dal(RJD). Ravi Shankar Prasad won from Patna Sahib. In Begusarai, Kanhaiya Kumar lost to Giriraj Singh(BJP) underlining the declining influence of the Left parties in India.

BJP won almost all the seats in Gujarat, Delhi, Rajasthan, Haryana, Himachal Pradesh, and Uttarakhand. Kirron Kher won from BJP in Chandigarh. In Delhi, BJP’s heavyweights like Manoj Tiwari, Harsh Vardhan, Gautam Gambhir, and Hansraj Hans took to the stage trailing highly admired candidates like AAP’s Atishi Marlena and other experienced leaders like Sheila Dixit or Ajay Maken from the Congress. The only state in northern India which didn’t entirely accept Modi sarkar is Punjab. Here Congress won 8 seats out of 13 and BJP-Akali Dal won 4.

Towards the south, BJP also made its inroads in Karnataka where they did exceptionally well winning 25 out of 28 seats, pushing Congress and JD(S) to one seat each. Both HD Deve Gowda and CM H D Kumaraswamy’s son Nikhil Kumaraswamy lost to BJP candidates in their respective constituencies. In fact, the only JD(S) member who bagged a seat, Prajwal Revanna has decided to resign and make way for grandfather and party’s national president Deve Gowda to take his place in the Lok Sabha.

In Maharashtra, the BJP-Shiv Sena duo won 41 out of 48 seats and in Madhya Pradesh, BJP won 28 out of 29 seats. It came as a shocker to the whole nation when Pragya Thakur(who called Nathuram Godse a patriot for assassinating Gandhi and who had “cursed” Hemant Karkare to die in the 2008 Mumbai attacks) won from Bhopal against Digvijay Singh of the Congress. This clearly shows how any candidate backed by the name Narendra Modi could win a parliament seat in the current Indian scenario.

Halfway Around The North-East, Still A Long Way To Go

Now the BJP sweeping over the Hindi belt was foreseen even before the elections due to its staggering performance in the region in 2014. Going over to the north-east, the saffron party could only penetrate Assam, Tripura and Arunachal Pradesh. BJP had already won hearts in Assam due to its successful subsidy schemes and architecture projects such as the Bogibeel bridge, a rail-cum-road bridge which cuts down train travel time to Arunachal Pradesh by more than 10 hours. Even with the state’s opposition to BJP’s Citizenship Amendment Bill, the BJP-AGP alliance won 9 seats out of 14, Congress getting 3 and Badruddin Ajmal(AIUDF) winning from Dhubri. In Arunachal Pradesh, BJP won 36 of the total 58 seats with 3 BJP candidates winning unopposed. BJP led in both the constiuencies in Tripura.

In Manipur, BJP leads in one constituency and NPF(Naga People’s Front) leads in the other. In Nagaland, NDPP (Nationalist Democratic Progressive Party) has won the only Lok Sabha seat. The NDPP took power from the prior NPF(Naga People’s Front) who has been in power since 2004. Mizoram also saw the win of a regional party MNF (Mizo National Front). In Meghalaya, one among the two Lok Sabha seats went to Congress while the other  to NPP(National People’s Party). Sikkim saw a rise in a regional party SKM(Sikkim Krantikari Morcha) with 17 out of 32 seats, which ended CM Pawan Kumar Chamling’s 25 years of rule after a close contest. Turns out four out of the seven sisters still favor regional parties over a “nationalistic” one.

Creeping Into South-India, One Election At A Time

Now the south has always been tough to penetrate by any national party due to the region’s strong resistance against the imposition of homogenization. The Dravidian parties and ideologies of Tamil Nadu yet again blocked BJP from gaining a foothold in the state. The Congress allied, Stalin-led DMK won with Tamil Twitter trending with #GoBackModi even after Modi visiting the state four times before the elections to break the jinx. The one constituency in Puducherry too was won by the Congress’s V. Vaithilingam.

Even Andhra Pradesh has been a tough nut to crack for the BJP where Y.S. Jagan Mohan Reddy of YSR Congress Party led this time, beating the Chandrababu Naidu led Telugu Desam Paty(TDP). The Telugu state voted for an option which catered to all strata of the population and also covered farmers’ interests and minority issues rather than concentrating only on infrastructure projects which Naidu has been focusing on his whole term. Even in Kerala BJP was never even an option. The Congress-UDF alliance in Kerala won 19 out of the total 20 seats with Rahul Gandhi winning from Wayanad and Shashi Tharoor taking the lead in Thiruvananthapuram.

In Telangana and Odisha, the Modi wave merely makes itself visible, with BJP winning only 4 out of 17 seats in Telangana and 8 out of 21 in Odisha. In both the states, the regional parties TRS led by K Chandrasekhar Rao and Naveen Patnaik led Biju Janata Dal(BJD) managed to secure a stronghold.

Now, after the win, Modi in his statement says “Together we will build a strong and inclusive India.” His win did boost SENSEX and NIFTY to an all-time high and his government will be expected to pursue economic reforms, but how “inclusive” will he be considering the very ideology behind the saffron party is Hindu nationalism, is a question left to be answered in the years to come.