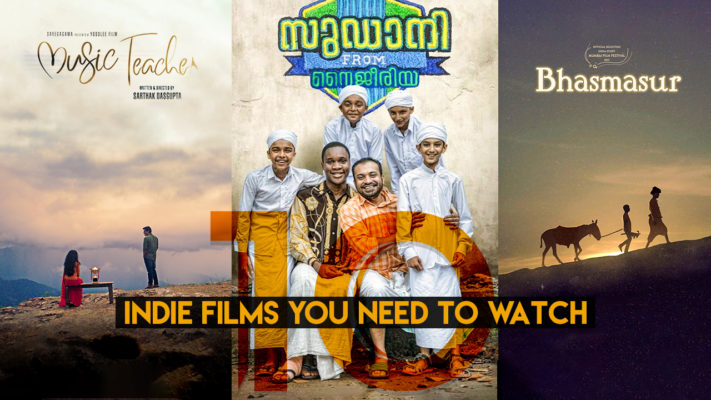 In the tech age that we live in, especially due to the overload of streaming content available online, there is no drought for things to watch online. From superhero movies to white-knuckle thrillers to historical period pieces, there is so much to consume. But sometimes I like to watch something personal or an artist’s voice in their work. These following films quenched my thirst for such content online.

Savam is a black and white experimental Malayalam film. It follows a group of people in a neighbourhood after they learn that one of the residents is dead. We see the family, friends, and neighbours react or cope in a very real and authentic manner. Through the course of the hour-long film, it immerses the audience in a community, their lives, their secrets, and their practices.

The film follows a fishing community living on floating biomass in Loktak Lake in Manipur, North Eastern state in India. They were ousted from their houses by government intervention in 2011. Their houses were destroyed and destitute villagers were forcibly relocated. The film has a knack for making chaos feel inevitable due to the extreme stillness of the camera.

Sometimes or Sila Samyangali is a 2018 Indian Tamil-language drama film, written and directed by Priyadarshan. The film follows Seven people from different walks of life give their blood sample for ELISA Test – AIDS Screening. To avoid the tension of waiting, they decide to bribe the technician and know the results earlier. What follows is a brilliant socio-political thriller, which also happens to be very educational and entertaining. If you are looking for something that can keep you hooked while also educate on some important issues, do check it out.

The film follows Hari, a small-town taxi driver, getting married to a girl he has never met, arranged by his family. The film almost invents a new genre, which I would like to call a Rom-Com Documentary. Due to the light tone that it has, it brings to light old traditions and their flaws without being judgemental.

Love and Shukla is a modern-day romantic drama that brings to screen the story of a newly married man searching for a way to be alone with his bride while sharing a one-room apartment with his family. It perfectly encapsulates what it feels like living in an overpopulated and very traditionally conservative country like ours.

Radiopetti is the story of a 70-year-old man, partially deaf and is extremely fond of the valve radio, a gift by his dad when he was a child. We then see the repercussions on his life when he loses his beloved radio. It is an intimate portrait of an old man who has never learned to grow-up.

Mukti Bhawan follows the story of a reluctant son who must take his father to the holy city of Varanasi, where his father believes he will breathe his last and attain salvation. It is a beautiful portrait of two men who have vastly different perspectives on life, death, and salvation.

Bhasmasur is a beautifully shot odyssey of a father and son. They are on an epic journey through the unforgiving terrain of the Rajasthan desert. The relationship between these men starts off as fractured and as their strength is tested, the relationship gets stronger and stronger. It’s a great example of minimal story-telling with a lot of heart.

Sudani from Nigeria is the Story of an African football player and a local football club manager from Malappuram, Kerala. It is a very humanistic story of two very kind-hearted men from vastly different cultures finding a way to bond through a common interest in a sport. While the premise might sound cliché, the film finds a very unconventional way to tell this conventional story.

Music teacher is the story of an extremely idealistic music teacher in a rural hill station and his estranged student Jyotsna who is an established singer in Bollywood. Her sudden return to the hills sets off this very personal story of two people who love music but have a very different ideological outlook towards the art form.