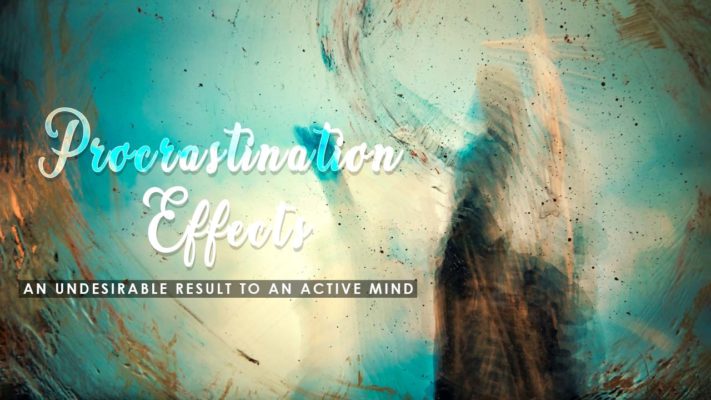 The Sleep Mode That Reveals Uncertainty Of Completion

Procrastination is conspicuously visible amongst the present generation. We come across many distractions as we have ample opportunities to waste time. Procrastination needs no effort but it ruins our ability to achieve our short term and long term goals.  The article throws a stone at us asking why we carry this cladding throughout our life. As we are aware nobody has an answer, it is important to know the cause and effects of this habit so that it dies and we rejuvenate as new human beings.

Procrastination entails a huge ransom in the human brain that twinkles brightly at the time of work. A wandering mind never settles for one rather it stops in a confused state – undecided mind which takes undefined time to return to activity. Distraction refers to sleep mode since the main job that is to be completed has been halted for no reason. Wavering mind strings to multiple activities and in the bargain, we would have not completed any task that is undone. The person who is distracted unveils his incapability to showcase his potential.

Art Of Procrastination That Dwells In Humans For A Reason

The art makes it evident that procrastination is needed to sustain and to yield fair results. Every individual work to succeed but at times fail in attempts. The layer between delaying and waiting is less. Sometimes delay in achieving is necessary to make ourselves stronger and perfect in a task. Wait means a lot that inculcates a sense of responsibility within us. It acts as a catalyst for knowing our shortcomings at large. The MarshMellow theory insists on delayed gratification. It is as important as work. The success rate depends purely on this theory. The human tendency to delay is a voluntary action to substitute effective work time with leisure time.

In his new book, Wait: The Art and Science of Delay, Frank Partnoy claims that when faced with a decision, we should assess how long we have to make it, and then wait until the last possible moment to do so.

The choice of procrastination for doing work enables the doer to widely think on the aspects of priority. The doers prioritize the work based on the interest they have towards the particular work. It is a war between urgency and lethargies. Few people work towards a particular goal, in the same way, few people work with no goals. A person who procrastinates enjoyment reaps success but a person who runs behind immediate joy and procrastinates urgency pays a huge cost and that leads to many implications. Preferential procrastination takes place when we come across an untravelled path and we find out that this would be beneficial and help us prove our mettle in the new arena.

A Habit Of People With Attention Deficit Hyperactivity Disorder (ADHD)

Attention Deficit Hyperactivity Disorder is a deficiency in having control over our own self. People with ADHD are hyperactive by nature. They lack self- control and cannot concentrate on work. A study reveals that people with ADHD have two types of procrastination: Decisional and behavioural procrastination. Decisional procrastination prevails amongst the community at a higher rate. Behavioural dawdling is because of long-standing neuropsychological issues they have limited ability to focus, absent-mindedness, critical thinking challenges and desiring for prompt delight. This would prompt under execution in scholastics and different exercises too. Thus they can adversely evaluate a circumstance with a cynical predisposition. They show verbal and physical animosity and take part in the utilization of liquor and have wrong ideas and convictions about their qualities and capacities. In the deal, they become disappointed and show nervousness, the cycle proceeds.

There is research evidence that demonstrates adults with ADHD have fitness for reappraisal or reframing of unpleasant circumstances. It is conceivable that negative cycle turns into an inspirational power that adjustments in circumstance. A Drive Theory was proposed by Hull in 1943 that suggests that humans reduce tension in order to maintain a sense of comfort and equilibrium. While people with ADHD may adapt to the spontaneous process of reappraisal, this may be negatively influenced by their cognitive impairment, resulting in being unsuccessful. There are also cases where an ADHD person reframing situations positively and try several times to achieve success.

Say No To Procrastination For Better Results

Procrastination is a symptom that pops up in everyone’s’ mind for unnecessarily wasting time. Many people who have delayed procrastination have witnessed success. Steps that cure this mind disease are listed below.

–Focusing  on achieving goals  redeems the procrastinator from wasting time

–Taking undoable task stretches the work that the procrastinator is involved in and he never completes it. Further, the implications would be not manageable.

–Setting deadlines is the key to reduce procrastination.

–Do not forgive yourself when you procrastinate so that the habit dies.

The human tendency to procrastinate is prevalent amongst all categories of mankind. That means even hardworking people procrastinate at times. The mind starts to wander and finally we humans tend to procrastinate. Delay creates tension and dissatisfaction to us, in turn, it becomes endless. Raising voice against ourselves for procrastination gives us success as a reward.