[VoxSpace Life] Samanwaya Is Not Just Another Initiative, It Is The Victory After Years’ Of Defeat 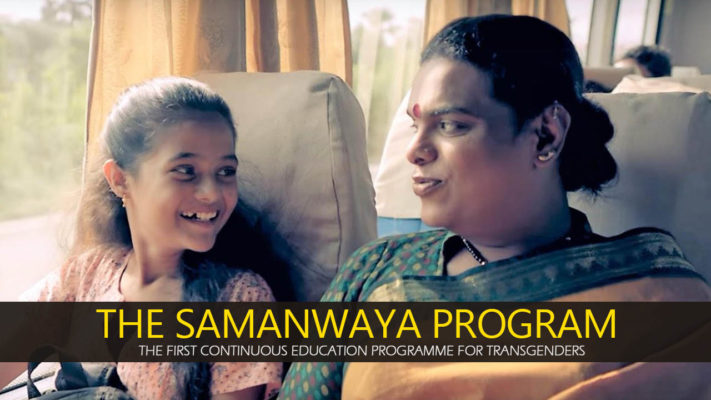 The fact that socio-economic welfare should not remain confined within a particular class, but should rather spread out its wings to thousands of underprivileged, victims of society is perhaps demonstrated best by the Kerala government. The Kerala government has always made it to the news by creating and developing schemes that were previously beyond the prudence of other states. In 2016, Kerala beat other states to rank topmost under the categories of law and order, health and environment. Its recent big accomplishment, however, is the introduction of free ‘shelter homes’ and the Samanwaya program for its transgender population, a section almost obliterated from government schemes and programs, as if fashioned in the manner of denying their entire existence.

The special literacy program, Samanwaya,  is a major part of the ‘shelter homes’ plan. It is structured to provide free education, food, and shelter to the community, uplifting them so that they can progress to inculcate themselves within the society. At this juncture, not many states can boast of thinking about these people, who have submissively taken upon themselves the tradition of begging and abusing besides footpaths, inside train compartments, on the main road, demanding for money almost in a coercive manner.

It is true that many states pride themselves on having boards and committees dedicated to transgender issues, but progress has unfortunately been restricted to that. Lack of funding, transparency and fierce determination to eliminate problems at grassroots have been detrimental to any sort of further advancement. Adding more to the shame, transgender people are denied accommodation, and jobs in spite of the required qualification simply because of their orientation. Kerala, however, has decided to fight against such blatant oppression, with Samanwaya.

The community, colloquially known as Hijra historically, has always been viewed as a separate community. Their status has suffered a blow during recent times, but this filtered outlook has done very little for their betterment. During Mughal regime, they were employed to dance and sing, pay homage to guests in the court, looking after the queens and looking after harems.

Their social status subjected them to poverty, illiteracy and ridicule, their previous social status is completely outworn when put in present context. It is indeed nothing short of ill fortunes that they have been reduced to the standards of beggars, miscreants and wretches. Hindu mythology talks about Ardhanarisvara, an avatar of Lord Shiva spilt into two halves- male and female. Bahuchara Mata is, however, a well-known deity of the trans community, she is especially invoked during Nirvana or the castration ceremony.

In Ramayana when Ram left for his exile, a horde of his followers had gathered in the forest, Ram being concerned about his devotees urged his followers, specifically “men and women” to return to their households. Fourteen years later on his return, he found hijras dotingly awaiting for him, after which they were fortunate ones to receive the adulation of their lord. However, the significance of this story is not just limited to how they were granted special provisions like giving blessings to people, but Ram’s shortsightedness which has seen its extension during contemporary times, or ever since.

The community is ostracized, it took many years for educational institutions, public toilets, private and public sector to recognize and accommodate them based on their quality and merits. People belonging from this community are now being given the opening to achieve something for themselves, that would provide them with a self-identity, something that blessing giving ceremonies could not have bestowed upon them.

After all, why deliberately bottle up their capabilities, restricting their movements and moulding their identity into oblivion on behalf of them? Why generation after generation, in India particularly, they should suffer the blows and whims of patriarchy? Who gets to decide for them and why?  It is both undemocratic and absurd and Kerala has undone the unthinkable, urging the community to live a better life that education and employment would grant them. It is about a time when more transgender people would come forward to demand their rightful place in the educational system, political organization, employment, child adoption among other things.

In the wake of these developments, meet the first transgender lawyer, the 36-year-old Sathyasri Sharmila. She envisions the day when such events will become commonplace and we do not have to place “transgender” while reporting about the event. Sharmila has spun her courage out of years’ of abuse, victimization and her acute awareness about trans-community.

Joyita, born as Joyonto was another victim of the stereotypical society imposing strict rules of gender conformation. Born in an orthodox Hindu family, Joyita had suffered her share of torments so much that she had to leave the incarceration of her school to spare herself of the torture. She left home to work in the rural side of West Bengal and since then she never looked back. After crossing many milestones, she made herself the first transgender judge of India.

Ganga Kumari has also made it to the history by becoming the first transgender constable amidst rising surge of protests and arrogance of other officers to appoint her as a constable due to her identity. Their accomplishments are not however tainted with stigma and torments and this is precisely the reason why we need government initiatives that would strive to mitigate some of these.  I am sure there are many such stories which are yet to become a news and many more to come in the future due to the initiative that Kerala has taken for them. High time India should dissolve the numerous demarcations- caste-based, gender-based and religion based, in order to form a more reformed society.

In an interview Laxmi Narayan Tripathi, a renowned dancer, activist and actress, has stated how society views the community with annoyance and contempt, the community has been deprived of their share in history and literature. In my opinion, the same would continue if the law resides in the hands of the privileged, the upper caste cisgender. Not many are lucky like Tripathi who has toured Europe, promoting her film Between The Lines and arranging dance workshops; many are yet to know the reality lurking behind their subjugation because many have actually normalized the situation for themselves. This is more dangerous than any other forms of subjugation. She has even expressed her disdain when people ignorantly confuse her gender and identity, their feminity becomes the subject of laughter and suspicion which ensues out of sheer ignorance. Gender and political discourses are hardly included in academia and therefore the complexities of this community are still lurking under the shadows.

Heartiest Congratulations To The Initiative And Here’s Anticipating More. . .

In conclusion, the initiative Samanwaya, by the Kerala government might have brought happiness and a ray of hope within the community, but it would still take some time before any massive change takes place. People belonging to this community are burdened with supernatural powers, while in the process are snatched away from their rights to lead a normal life. This delusionary effect has successfully resulted in subduing their voices and painful cries. Many battles are yet to be won and Kerala has just paved the way for a favourable battleground.