[VoxSpace Life] Mizo Peace Accord : The Story Behind India’s Most Intriguing Peace Initiative 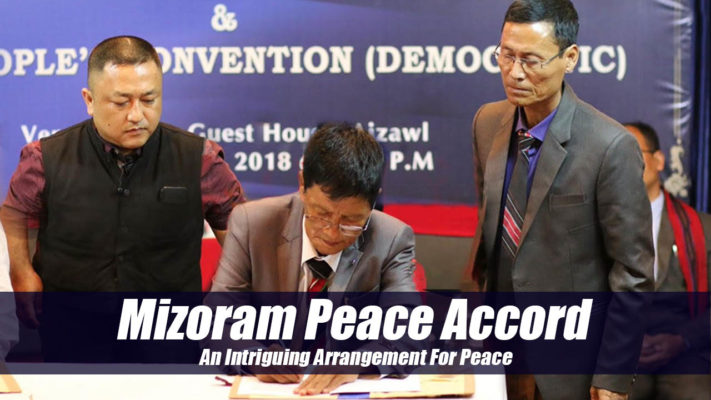 India And The Mizo Peace Accord

One of the seven sister-states of India, Mizoram has been nothing less than a model state to the country. With a GDP per capita of nearly double to that of Uttar Pradesh and literacy rate second only to Kerala, it won’t be wrong to portray Mizoram as an epitome of perfectness, especially in a region rife with insurgency and civil unrest. However, if you see the history of Mizoram, you would be surprised to see that a few decades back, the situation was something exceedingly different than what it is today. In fact, the insurgency in the area was so vicious and powerful that India, under the leadership of Indira Gandhi, deployed the Air Force to drop bombs on the northeastern state’s capital, Aizwal. Of course, it was owing to the revolutionary Mizo Peace Accord that peace finally prevailed in the state as well as between Mizoram and the Centre. Signed on June 30, 1986, between the Centre and the Mizoram authorities, the Mizo Peace Accord has been one of India’s first and most promising successes after independence.

But, what led to the conspicuous disturbance in the hill state in the first place that posed the entire state against the centre? Many of you might not know but there is an interesting story which led to the signing of the historic Mizo Peace Accord.

The Story Of ‘Mautam’ – A Deadly Catastrophe That Initiated The Insurgency

According to history, ‘Mautam’ is a deadly ecological catastrophe that hits Mizoram once in every 48 years. According to records, the Mizo Hills (which is also known as the Lushai Hills in colloquial language) were struck by Mautam in 1862 and 1911. Prepared for it this time, the Mizo District Council (since the state was under the administrative control of Assam back then) pleaded the Assam government for Rs 1,50,000 to prevent the impending famine. Brushing the request off as a miniscule tribal ritual, the Assam government refused to grant any aid towards it.

Once the ‘mautam’ struck, the Assamese government turned a blind eye towards it. Not only they did not care about the famine and grant any aid towards the betterment of the people of the then Mizo District, the Assam government tried all means to cripple the Mizos. They even denied any cultural identity to them – making the knowledge of Assamese mandatory to get any kind of jobs, thus crippling the Mizos all the more. And with such atrocity around, it was quite understandable that a revolt was on the cards.

Unable to bear this pressure and humiliation in the hands of the Assamese government, a Mizo havildar in the Indian Army and an accounts clerk with the Assam government, Laldenga, quit his government job and founded the Mizo Famine Front to protest against all odds.

What Do People Say About Mautam? How Bad Was It?

Now, before we go ahead into knowing more about the accord, it is important to know about ‘mautam’. Was this just a tribal belief, as propounded by Assam? Or, was it indeed a terrible catastrophe?

Literally translated to ‘bamboo death’, mautam last struck Mizoram in 1959. Talking about the same, former Mizoram Agriculture Minister H Rammawi told the Hindustan Times in 2008, “Bamboo flowering and the subsequent invasion by rats on granaries and paddy fields in the region is a phenomenon that signals an impending catastrophe or a famine.”

It was one such signal that prompted the Mizos to urge Assam and the centre for aid. However, it fell on deaf ears.

Talking about the same issue, Anand Ranganathan, a journalist who has documented the Mizo insurgency, for Newslaundry, wrote, “As Mautam continued to wreak havoc, thousands died or starved, their crops and livelihood ravaged by rats whose population rose to such alarming levels (running into millions) the state had to run a scheme that rewarded citizens for turning in dead ones—40 paisa for each dead rat. The Loshai Hill People feared the worst.”

So, from such documents, it is quite clear that mautam was not a trifle rendition of any tribal folklore. It was a serious issue – an extremely serious issue that prompted swift action. There was, however, no action but endless humiliated, which set the stage perfectly for rife and insurgency.

How Did Mizo Famine Front Become An Insurgent Group?

The cornering of Mizo people gave way to the Mizo Famine Front, whose operation was necessarily limited to their upliftment and their protest against the Assam government. However, in 1961 Laldenga established the Mizo National Front (MNF), which eventually transformed into a separatist organization. It sought to assert the Mizos’ right to self-determination. Although their stance was absolutely non-violent in the beginning, thanks to the then prevailing circumstances, they were literally forced to take up the arms. And, that marked an era of unrest and strife in the lush green hilly terrains of Mizoram.

Later, with the success of the MNF, the Mizo National Army was born. Interestingly, MNA started receiving arms and funds from India’s proclaimed antagonist states – China and Pakistan – with the help of which, they launched a full-scale insurgency against the central government. On the other hand, the Indian government was trying its best to thwart such actions and tried their best to push the MNA leaders across the border to Bangladesh – the then East Pakistan. Laldenga was arrested in 1963 but, for some strange reason, he was soon acquitted.

“On February 28, 1966, the bottled-up anger—against Assam, against India, against perceived and real injustices; against geographical claustrophobia—found its release, in the form of Operation Jericho. At 22:30 hours, a gang nearing a thousand MNF men took control of the BSF and the Assam Rifles Camp. Soon after, they damaged the Telephone Exchange—leading to a complete disruption of government communication—before taking over the Treasury and other important government buildings in the region,” writes Anand Ranganathan in his document for Newslaundry.

This repeated disruption led the MNF to release a 12-point declaration soon, prompting the liberation of Mizoram from the Indian government. After three days, came the Indian government’s answer. And, this time through the Indian Air Force – the then central government deployed four fighter jets to massacre Aizwal. That was March 5, 1966.

Although only 13 people lost their lives in the bombing, it caught the people of Mizoram in perpetual terror and fear of the unknown. As a result of this, more people went to join MNF as a protest. Former Chief Minister Zoramthanga himself accepted that he had “joined the MNF party and participated in the rebellion due to the relentless bombing of Aizawl in 1966.”

Laldenga Fled India and Returned Over A Decade Later

The repeated strife and bombings prompted Laldenga to flee India. He had crossed the borders and reportedly went to Bangladesh before going off to London, where his family was settled. However, the then Indian PM Indira Gandhi placed two conditions on Laldenga after he sought to return to his country. One condition was a complete cessation of armaments, while the other was a settlement along the contours of Indian constitutions.

Laldenga was scheduled to meet Indira Gandhi on October 31, 1984 – the same day she was tragically assassinated by her own bodyguards.

Finally, with Rajiv Gandhi taking over the reign of the country from his mother, there was a change in guard of Mizoram. The following month, news of 750 MNF rebels giving up their weapons and undergoing rehabilitation at a centre in Luangmual on the outskirts of Aizawl came, which allowed the separatists to return into the mainstream.

It was almost 7 months later in July 1985 that the Mizo Peace Accord was signed. Taking cognizance from the mistakes of the past, New Delhi granted Mizoram a full statehood, with Laldenga becoming the interim Chief Minister of the state.

It must be noted here that during the reign of Rajiv Gandhi, numerous peace accords were signed. However, by far, the Mizo Peace Accord has been the sole peace accord that has stood the test of time, as Mizoram still remains one of India’s most peaceful and educated states.