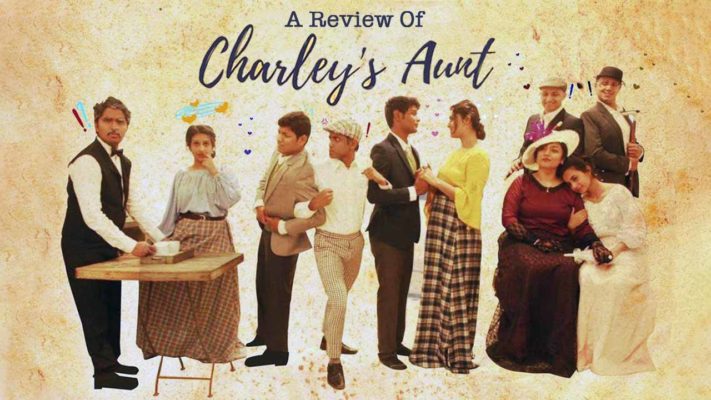 Jack Chesney and Charley Wykeham, two Oxford undergraduates are madly in love with Kitty Verdun and Amy Spettigue. Their only grouse is that Amy’s father and Kitty’s guardian, Stephen Spettigue is a sour old man who goes to great lengths to prevents them from meeting, including bundling the girls off to Scotland. In a stroke of luck, Charley receives a letter from a Millionaire aunt he has never met. Providing the perfect opportunity for him and Jack to profess their love to the girls, by inviting them over to lunch on the pretext of meeting Charley’s aunt.

Much hilarity ensues over miscommunication, impersonations and mistaken identities, eventually though with the help of their friend Fancourt Babberley, the boys are united with their love interests.

This famous play was first performed over 125 years ago in 1892 and broke all records of the time with 1,466 performances in London alone. Which goes to say that there was the weight of legacy riding on the shoulders of the director and cast of this production. To add to that was the pressure of this being a re-staging and it showed.

While Jonas David’s power-packed performance as Fancourt Babberley or “Babbs” and as Charley’s Aunt singularly carried the play through, some of the cast members seemed like they over memorized their lines and had flat expressions. This is by no means a negative remark, merely a reminder that sometimes one gets so engrossed in their task that they forget to have some fun too.

To play characters from the Edwardian era with a dialogue that has a laugh a minute is no mean feat, and all the actors must be thoroughly commended for it. The audience was in splits right through the play, so the director must get his fair share of accolades. However, it was one of those experiences, you walk away from thinking, what if, it could’ve been done better.