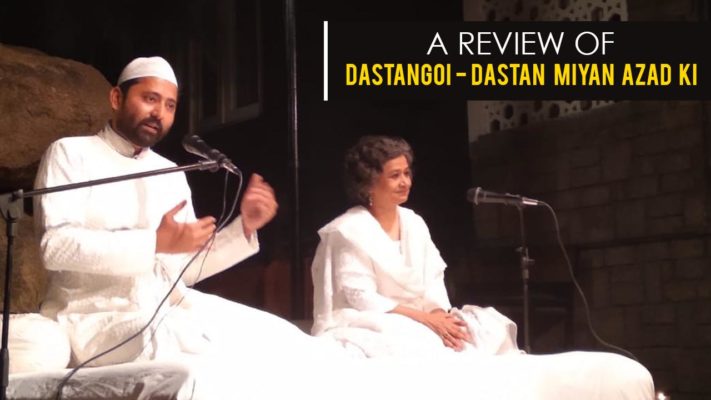 The art of storytelling is possibly as ancient as mankind itself. We’ve created myths, gods, epic poems and shared them over generations. We do it everyday, when we negotiate, trade, love and lie. We all tell stories.

Some can build castles in the air and depict an entire bazaar solely through the power of their voice, a slight inflection here, a strong emphasis there, and you have the story unfolding before your eyes, merely built on intonation. Dastangos are masters of this subtle art, enthralling their audience with fantasies and facts alike. A quick reminder that there are no props or instruments to aid them in the narration, so quickly put away any comparisons to a radio play.

Dastangoi came to India in the 13th century through Persia and enjoyed rich patronage and great practitioners of the likes of Amir Khusrow. However in the early 20th century it had almost vanished after the death of Mir Baqar Ali. Thankfully, it is now enjoying a second wind, largely due to the efforts of Mahmood Farooqui of The Hoshruba Repertory and his uncle and poet, Urdu critic Shamsur Rahman Faruqi.

Nearly a decade ago, I had my first brush with this art form when Danish Hussain & Mahmood Farooqui regalled the audience at J.N.U. with the tales of Amar Aiyyar (sorcerer) from the oldest tome, the Dastan-e-Amir Hamza. SInce then each time I’ve experienced a Dastan, I’ve walked away wanting to hear more.

This weekend, Lamakaan hosted Valentina Trivedi and Askari Naqvi over 3 nights for Dastangoi and the equally challenging songs of lament, Soz Khwani. Their dastaans were based on the Fasana-e-Miyan Azad, a fictional character  by Pandit Ratan Naath Sarshaar, through whose eyes we enter the realm of Lucknow of the late 19th century.

A letter full of banter between an aging husband and his young bride, “Khusat shauhar ke naam naukhez biwi ka khat”, a recce of Lucknow during the month of Muharram, “Lucknow ka Muharram ul Haram” an description of the spring of yore of how Lucknow would come alive in Basant. In this tour de force, with Miyan Azad leading dastangos, led the audience through the bylanes of Lucknow and acquainted them to the smells, sounds and sights.
The free chai and famous Lamakaan samosas added just the right amount of old world charm to the evening.