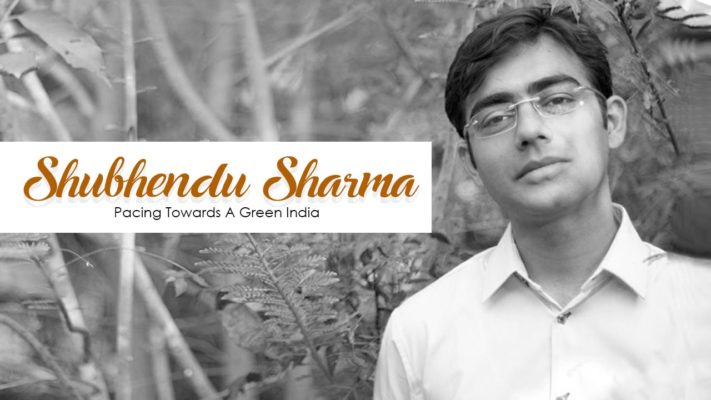 The pace at which the daily mechanical world is functioning results at the approximate production of 114 cars every minute, while almost 36 forest areas, as big as football fields, disappear every minute on a global level. Amidst this grave injustice against nature, one man is striving and fighting every day towards changing that. Shubhendu Sharma, a former corporate engineer, quit his decent paying job to make the creation of forests his life’s mission.

Shubhendu Sharma is both the founder and the director of ‘Afforestt’, an organization that applies the “Miyawaki Technique” for creating a natural, native and sustainable forests. Forests that grow faster by at least ten times, than the conventional forests, thus, providing a magnificent green cover to any piece of barren land.

Commenting on his inspiring initiative, Sharma said, “I work with different stakeholders from individuals to businesses and governments to help turn urban and peri-urban spaces into natural forests. We can build a man-made forest that can spread over acres of area, or it could fit in a small space –as small as your house garden.”

Planting The Seed Of A ‘One Of A Kind’ Idea

Sharma’s life took a turn when he decided to voluntarily assist and collaborate with Akira Miyawaki, a naturalist, in the cultivation of a forest at the office premise of Toyota, where he was working at the time. Immensely overcome by the technique of Miyawaki, who in fact was responsible for the regeneration of forests stretching from Thailand to the Amazon, an impressed and inspired Sharma decided to reproduce the model and try such a technique in the urban landscape of India.

Without wasting any time, Sharma began experimenting with the technique, trying to improve and modify it through certain changes like the use of soil amenders. In no time, after some successful alterations and modifications made to the original technique of Miyawaki, Sharma produced his own version of the Miyawaki technique, suitable for the Indian land. Once his newly improvised technique was ready, he decided to test its effects in the backyard of his own house located in Uttarakhand.

How to grow a forest in your backyard | Shubhendu Sharma

To his utmost happiness, in a year’s time, Sharma’s barren backyard turned into a verdant green forest. This provided him with the much-required confidence that he needed to establish his unique idea into a full-time and permanent initiative. Without much further ado, he left his job at Toyota and committed all his time into doing the required research on the Miyawaki technique to bring about further improvement.

A lot of research, planning and enthusiasm later, ‘Afforestt’ was born in the hands of Shubhendu Sharma. Soon, ‘Afforestt’ gained a steady velocity and became an uninterrupted provider of service for the creation of native, wild, natural forests free of maintenance by 2011.

In an interview, Sharma admitted, “I realized it can’t be done as a ‘do-gooder’ activity. If I wanted it to succeed, I had to think it through and come up with a business plan, and a bunch of my friends helped me to set it up.”

Sharma has received the honour of being proclaimed as an INK, TED and Ashoka fellow and he claims to have been very clear, since the start, about his thought of establishing ‘Afforestt’ as a profit organization. However, his brainchild, ‘Afforestt’ was more important to him than just associating a business value with it. He wanted it to be an organization that would change the pattern in which the industrial section of India works. In fact, Sharma elaborates on his idea as he states, “The idea is to bring back the native forests. They are not only self-sustainable after a couple of years but are also maintenance free.”

Afforestt: Not Just A Platform, But Also A Process

There are essentially two ways in which ‘Afforestt’ functions. First, they provide uninterrupted services, bringing about Management and Project Execution services in totality, which also includes curation of tools, facilities, materials, labour and equipment essential for the execution of the project of afforestation by the Miyawaki technique. Secondly, they services like project management, software support and on-site consultation.

The Miyawaki process that the platform of ‘Afforestt’ has adopted begins with the conduction of a survey on the soil quality where the forest is to be grown and discovering the missing element in the soil. The minimum size of land required for the process of afforestation by this unique method is a thousand square feet.

The next step would be to conduct another survey for studying the native species of plants and biomass. Post this step, saplings are carefully nurtured in nurseries and the soil made more fertile by combining it well with the biomass.

Shubhendu Sharma: How to grow a tiny forest anywhere

Next is the most awaited step, where, in a process, fifty to a hundred variations of species of native plants are planted at approximately three to five per square meter density.

The final step is the most important one where the area is weeded and watered for two years and post this, the forest turns to become maintenance free and self-sustainable.

In this whole process, Shubhendu Sharma plays a major important part where he formulates and designs the ratio, sequence and pattern in which the nurtured saplings are to be planted to facilitate rapid growth.

In the average scenario, a sapling approximately grows one meter in height every year. The low-cost form of ‘Afforestt’ gives it its highest advantage. ‘Afforestt’ charges approximately 150 in Indian rupees for every square foot, making it quite cheaper than the cost of the regular Miyawaki technique.

No Path To Success Is Easy, Afforestt’s Wasn’t Either

Difficulties and challenges had become a routine for Sharma since the day he decided to quit his job and engage his time into creating his dream project.

In fact, he recalls, “Especially, convincing the family was very tough. They could not understand why I was bent on quitting a high paying engineering job at Toyota to plant trees all my life.”

However, Sharma did not mind these minor obstacles and his stubborn self-pledged to turn his dream into reality. He opened ‘Afforestt’, hiding its existence from the knowledge of his family and it was not until a few months, by which the company was in complete action, that his family became familiar with the company’s existence and finally accepted it.

Acknowledging the contributions of his friends during this hard time, Sharma gratefully accepts, “My friends were a great support to me which gave me a boost. Till date, they take interest and engage in the activities of Afforestt.” However, talking about the biggest hurdle that Sharma had to face, he states, “The biggest challenge was to launch something which had no existing market and we didn’t even know if it ever would.”

Plant Forests Out Of Your Courtyard

‘Afforestt’ has provided services to more than forty-three clients and has planted more than 54,000 trees till date. In India itself, Sharma and his team have created more than 33 forests in than 11+ Indian cities. With his company gaining a huge reputation, Sharma has in his hold quite a few ideas to put his innovative technique more out into the world.

He has plans for launching a crowd-sourced monitored software that would enable people to nurture their native species of plantation using the tool. Therefore, in the scenario where a person wants to create a forest on their own, they would have an idea about which plant species they should opt for, thereby, making the task easier for them.

Shedding some light on this, Sharma expands, “We want to create a scenario where plucking a fruit from a tree in the backyard will be easier than buying it from the market.”

Shubhendu Sharma has huge aspirations for his unique initiative that ‘Afforestt’ essentially is, wherein he hopes that every individual in the society would play along with him for a greater good and a safer environmental future. Demonstrating an indomitable spirit he most passionately aspires when he says, “This should become a livelihood cycle, where a lot more people are engaged in afforestation.”