[VoxSpace Review] Aravindha Sametha : Old Wine (With A Twist) In A New Bottle 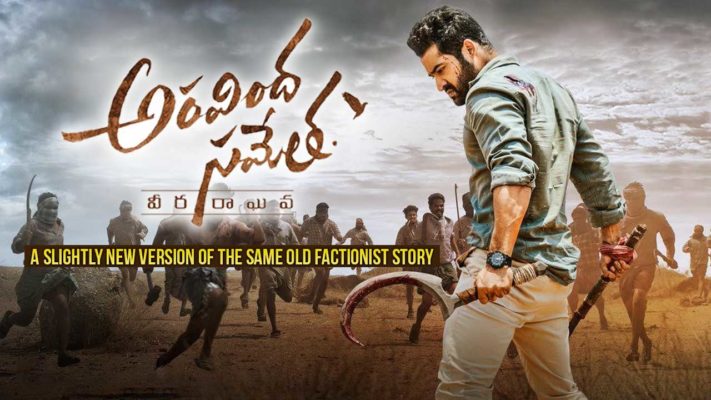 I walked into the theatre with not very high expectations and kind of a cynical apprehension towards the movie, which I thought I had fully figured out. I had seen the trailer of Aravindha Sametha, so I assumed I wasn’t going to be surprised at all. But, I was wrong. The movie opens with a brief history of the world of factionism that the director tries to deconstruct over the next 167 minutes of runtime.

After we are briefly introduced to the characters we are thrown right into this extravagant fight sequence which was my first surprise in Aravindha Sametha. A regular star’s introductory fight sequence is all about how cool he is, but this wasn’t that. It was an emotional unflinching sequence where we see so many deaths, which is very rare in Telugu mainstream films. And then we witness something even rarer- the consequences of the violence we just witnessed.

You might feel like I am overhyping the film with all the praises, but there is a reason behind it. I am not evaluating the film on my normal scale. I am grading it on a curve, comparing it only to other mainstream cinema we are normally offered. It is not some masterpiece on the consequences of generational violence, but it is at least trying to deal with such noble ideas.

It is not as sprawling or as well observed as Gangs of Wasseypur, which deals with similar ideas, but me bringing them both up in the same conversation is a great thing in itself. The movie is still doing these things in the framework of a regular “commercial” star film. But, change only comes through such small steps. The last time I felt like this watching a commercial Telugu film was Rangasthalam, which I thought was a very good film.

Technical Aspects Of The Film

The first thing that really impressed me was the look of the film. Aravindha Sametha clearly gives you a good sense of the area and the people in it can be attributed to the production design and the cinematography of the film.

The DOP really went out of his way to give the film a very dynamic look. With all his long takes, great lighting and framing, he gives depth to the image that lets you kind of look past the illogical fight sequences, purely because of how good it looks. The editing was good, nothing to rave about, but pushes the story forward.

The songs apart from the one towards the end with a stupid dance number were pretty well shot and choreographed. The music, though a little repetitive, was still pretty good. The ‘Peniviti’ song was really outstanding in its visuals, lyrics and music. I was still humming the song once I got out.

When it comes to acting, the film is almost single-handedly carried by Jr NTR, as he is practically acting his ass off all the way through. He is literally in every frame of the film, acing it! Jagapathi Babu also proves how dependable an actor he is. The rest of the cast is kind of just a garnishing, they are there just to move the story along, including Pooja Hegde. Beneath All The Sheen Lie The Flaws Of The Film

Now that I have over explained myself about why I liked the film, I will tell you what I did not. I had three main problems with the film.

Firstly, even though I said I loved how they dealt with the consequences of the violence. The director still can’t help himself but fetishize the violence in a way that it looks really cool. I personally do not have a problem with onscreen violence, but when it is elevated to the level of nobility, I start having moral issues with it.

Secondly, faux feminism. The film tries to present the problems of the women that are married to these violent people, but they are almost used as decoration because they never feel like distinct characters. They are just extensions of the feelings that the men in the film have.

Finally, the whole episode once he goes to Hyderabad, the forced unnecessary humour and the irritating romance with the female lead. I do not understand why every story needs to have humour. This is a grim story dealing with revenge and generationally inherited grudges. It does not need slapstick comedy, it does not add anything to the plot. All it does is destroy the mood of the film. I get really frustrated with how brainwashed these film-makers are with the unnecessary prerequisites they believe every film needs to have.

In conclusion, watch the film if you like mainstream cinema but want a slightly new version of the same old factionist story that our film-makers have been telling from the nineties.