#Metoo In Stand-Up : A Stance Against The Proverbial ‘Fun And Frolic’ On-Stage 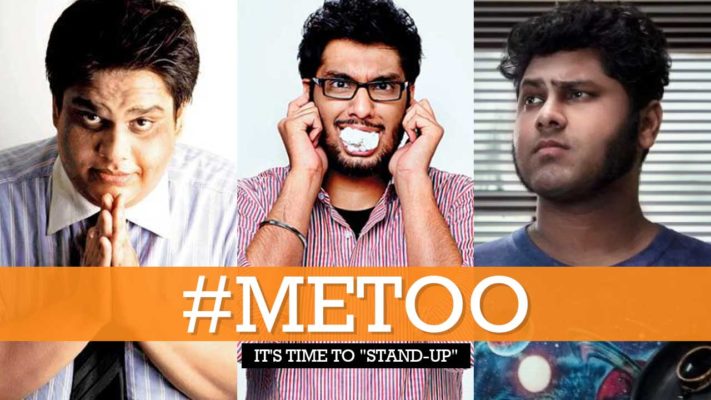 Whatever Has Been Normalized In Stand-Up Comedy World So Far: From A Victim’s Perspective

Hiding behind the garbs of mental illness, mansplaining, playing the victim card, and portraying himself as a married man belonging from a heterosexual family has been the standard norm ever since woman started coming forward with their allegations. However, how can one remotely justify a bunch of self-proclaimed liberal adults, launching progressive videos on consent and woke India, actively support sexual harassment by one of his team members? Take for instance the famous The Truth About Lust that made a mark for its originality and sarcasm! Yes, the person concerned is Tanmay Bhat, the co-founder of AIB and the intimidator, Utsav Chakraborty.

Utsav, who has for so long advertised the place of consent in Indian society coupled with sexual innuendoes, has brought down catastrophe upon himself by sending other women his “dick pics”, unasked for, and asking for the equivalent of those pictures in return. Instead of a straightforward apology, Utsav chose to resort to a number of schemes, at times refuting the claims or pretending innocent and the other times posting a long-winded self-justification. Ah! The irony of mocking and parodying the old world concepts of love, and sexual gratification by these same people!

Another incident of similar magnitude took place when Aditi Mittal was accused of forcefully kissing her peer and fellow comedian Kaneez Surka, on stage, depriving her the split-second before she could disapprove the act. This act of transgressions is being projected as “part of the act” to quote Mittal herself. Unfortunately, these are the people who have been ranting on male hypocrisy, open voyeurism, consent, and the other issues that are hushed about in the society, lauding themselves for being progressive.

Now, if they themselves turn out as the wrongdoer, whom do we rely upon? Stand-up comedy world recently has rendered themselves as the perfect example of the textbook definition of gaslighting, victimizing, pestering, and unfurling misogyny as the stage lights are shut off.

Thanks To Intersectionality For Simplifying #Metoo

Decades ago in 1989, a well-known American professor and civil rights advocate, Kimberlé Williams Crenshaw coined the term Intersectional Feminism emulating that oppression upon a woman is multi-layered as is influenced by race, socioeconomic status, class and gender, these factors constructing the power structure.

Tanmay and his co. have only agreed to and apologized for whatever has come to the limelight so far, many such incidents fail to come in full view because who will believe the victims?

In 2012, Daniel Tosh, an American comedian made a rape joke, and when confronted by one of the women in audiences, he retorted back to her “Wouldn’t it be funny if that girl got raped by like, five guys right now?” Many might have been wondering in which parallel universe should this be considered funny. Why the tag of comedian gives people the license to incite laughter by degrading women or poking fun on issues like rape and modesty?

Straightforward Apology Not A Strong Suit?

The entire fiasco of hiding away from one’s own act of sexual harassment, putting undue emphasis on the context of the situation and the likes, have been accepted so far by the virtue of their privilege and class. How else do you justify the collective silence of the stand-up comedy world, many of whom publicly confessed to knowing the crimes committed by Utsav?

Recently, writer Chetan Bhagat started justifying his advances towards a female writer of erotica, by giving excuses like reading wrongly between the lines, slip of tongue, the heat of the moment and his going through a “phase”. The sheer act of transgressing in workplace and reshuffling facts to suit Chetan’s narrative is being deliberately ignored, and this is nothing short of hypocrisy.

Even in the wake of #Metoo, the culprits are disregarding their culpability. It is surely a letdown and is perverse to the very motive of #Metoo – voicing against sexual predators and irrespective of whatever propelled them in doing so. Where on the one hand, the concept of intersectionality has given the movement a broader spectrum for understanding harassment, giving courage to personal declarations, the pre-existing privileges of men and especially of a married man, is derailing the conversation. They corner the lived horror of every man woman, girl, and child coming out to speak their minds.

Coming back to the maestros of the stand-up comedy world and the protective shield it offers to their vices, sitting behind which they have been committing the crimes, the very crimes they were protesting about. In a statement of apology, Utsav confessed that the pictures provided him “with an instant rush” and therefore why he continued preying on women unabashedly and with the knowledge of his mentor and CEO of AIB, Bhat.

These are the women who have kept mum keeping in consideration Chakraborty’s impressing presence and acclaim. Moreover, who would not believe the statements to be a propaganda against the woke Indian men?? It is not just the scenario in India, but American-Mexican stand-up comedian Louis C.K has also been named in #Metoo, and in this context, many former comediennes have written about their experiences prior to leaving male-dominated stand-up comedy.

There is little space to deny that the realm is not populated with misogynists and predators. It becomes even more apparent after Gursimram Khamba and Tanmay Bhat had been found tweeting on rape and paedophilic jokes. It took them an entire movement to realize where they have crossed the not-so-thin line between being a psychopath and funny.

A World Pivoted On The Axis Of Perversion

Painfully true but, in the stand-up comedy world, a lot of things depend upon the status quo and therefore bringing down somebody from their altar of deification and fandom is a difficult job. Therefore, for every anti #Metoo speaker out there, asking what took the victims so long, there are only a handful of victims explaining the difficulties of speaking against a bunch of people known for their pseudo-feminism, and pseudo-liberalism. These are after all people popular for cracking edgy jokes and scripting coming-of-age comedy for their bread and butter.

Parading as a liberal, harassing relentlessly, and portraying himself as the “victim” when exposed is perhaps the worst, but not a rare, stunt that perpetrators tend to pull. Earlier Louis C. K had laughed off the allegations pinned against him, predominantly owing to two reasons- his status quo and of course, his entitlement as a white-skinned comedian.

This nonchalant and easy-going approach to their character flaws stems from their self-assumed privileges for being a certain somebody. It is also indicative of the amount of trust that the world has bestowed upon the testimony of tormentors and survivors.

It is not jolting to hear an Austrian filmmaker Michael Haneke, commenting that the #Metoo has been designed to create “prejudice hysteria” via fuelling the pre-existing “man-hating Puritanism.” Continents apart, the vices are similar though their repercussion is differently felt.

My Humble Zeitgeist Tag For Your Accusations!

It is believed that comedy is more benevolent towards propagating rape culture and misogyny that operate from under the rug. In this light, predatory behaviours are often passed off as liberalism, it is the Zeitgeist tag that predators need to assert themselves on their prey over any form of consent.

Utsav Chakraborty or the collective AIB’s foul acts is not a revelation but, is a result of a chain of reaction going on bluntly since years. With #Metoo, the fight for integrity has gained the solidarity of uniform voices and therefore have more chances of getting heard. After the initial grand display of progressiveness and pulling off a victim, these people have long been in their cocoon, performing the very things they critique about.