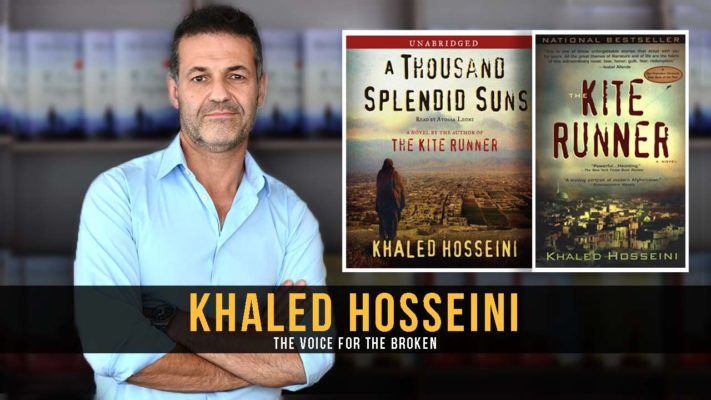 Khaled Hosseini And I

“For you, a thousand times over”- If this isn’t love, then I don’t know what is.

Khaled Hosseini is a gem of a writer. No doubts there. No questions asked. His writings squinch your heart like nothing else does. Of the incredibly woven tales by Hosseini I choose to talk about two books, that broke my heart and mended it back with gold, to vent out my love-hate relationship with his writings. The Kite Runner and A Thousand Splendid Suns.

Khaled’s writing is unthinkably unique. What makes his writings one of a kind is that he shoves knives into your heart with the gut-wrenching treatment of Hazaras by Taliban, and then melts it by the absolutely heartwarming character of Sohrab in The Kite Runner.

The way Khaled presents the tumultuous events endured by his characters gushes tears down your cheeks. The unimaginable ordeal of Mariam and Laila in A Thousand Splendid Suns, Hassan and Sohrab’s extremely distressing encounter with Assef in The Kite Runners rips you apart.

The way he describes both subtle and intense emotions of the characters is achingly beautiful. The envy filled in Amir’s eyes when Hassan suggests an alternate storyline for his first story, the unaltered affection and respect of Hassan and Ali towards Amir and his baba in The Kite Runners, Mariam’s transition from hating to finding a soulmate in Laila in A Thousand Splendid Suns are pure gold!

When Mariam waits outside the house for her father in A Thousand Splendid Suns, you find yourself waiting along with her and slowly falling apart, hurt. You hold your thudding heart in your shivering hands when Mariam and Laila attempt to escape. That’s what he does.

He takes you away from your couch into his duniya– his Afghanistan. And there, you find, not just the dreaded Taliban, but also Laila’s heartwarming baba. He impressively presents men with attitudes and ideals which are poles apart. “Marriage can wait, education cannot,” is one of the best lines by Laila’s baba.

Khaled primarily talks about how unfair life has been to lakhs of innocent Afghans, who have been the direct receptors of the repercussions of the Civil War. He’s not just talking about Mariam, but also about the fate of thousands of other helpless women who silently suffer throughout their life. Laila depicts the unwavering faith and courage shown by Afghans during the civil war and after.

Each character in his book has a story to tell. Farid, the taxi driver’s character explains how innumerable Afghans stuck to their motherland despite the chaos, waiting and hoping for a sunrise sans the showering of bullets and bombs. Laila’s mother is the window to the stirring soul of Afghanistan of that time.

Amir’s journey from being a kid filled with envy and pride, to an awkward teenager and finally becoming an adult (with guilt in his heart) and a responsible friend takes you through the journey of a lifetime. There’s no polish. No grooming. It’s Raw! That’s what his characters are. Real, layered and twisted. Just like all of us.

Khaled paints treacherous life of Afghans during the civil war on the canvas of our imagination with utmost conviction and realism. The warmth and love filled in his characters throughout the stories act as an icing on the cake. He moulds his stories in a painstakingly beautiful manner, breaks your heart but makes you fall in love with his characters and their lines over and over again.

Few Of My Favorite Lines By Hosseini

“And that, …is the story of our country, one invasion after another…Macedonians. Saddanians. Arabs. Mongols. Now the Soviets. But we’re like those walls up there. Battered, and nothing pretty to look at, but still standing.” – A Thousand Splendid Suns

“I want to tear myself from this place, from this reality, rise up like a cloud and float away, melt into this humid summer night and dissolve somewhere far, over the hills. But I am here, my legs blocks of concrete, my lungs empty of air, my throat burning. There will be no floating away.” – The Kite Runner

“There is only one sin. and that is theft… when you tell a lie, you steal someone’s right to the truth.” – The Kite Runner

“A man who has no conscience, no goodness, does not suffer.” – The Kite Runner

“I wondered if that was how forgiveness budded; not with the fanfare of epiphany, but with pain gathering its things, packing up, and slipping away unannounced in the middle of the night.” – The Kite Runner