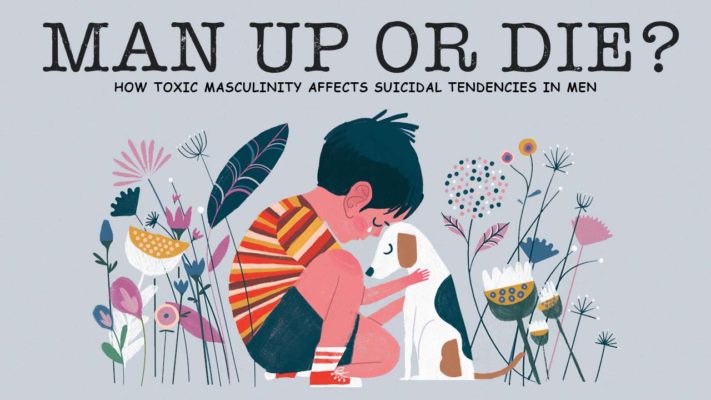 Let’s suppose a couple of your guy friends had a huge fight. You’re hanging out with one of them late that day and he says “Hey, am sad, I feel disturbed and hurt.” What would your reaction be? Is it “C’mon, are you serious? Be strong” or “I understand. Give it some time. Can I help?”

If it’s the first one, then this article is just about what made you say so.

We have all come across people who find men crying, being sensitive, talking about their insecurities obnoxious. They can’t take the idea of men being submissive, introverted or expressive. If you are one of them, am sorry but you need help. You are suffering from Toxic Masculinity.

Toxic Masculinity refers to the attitude that confines men to certain predetermined gender norms and socially constructed ideas of ‘being men’. It describes the masculine gender role as dominant, violent, unemotional, sexually aggressive, tough and so forth.

Everything. First of all, men are not things that they need to fulfil certain criteria to be called what they are called. They are humans and humans are diverse. They constantly evolve. They are constantly becoming.

Then how can we confine them to set rules? But Toxic Masculinity does. The alpha-male approach says men seek to be dominant and restrict their emotional expression to anger alone.

Such ideas restrict young boys and men from exploring and being themselves. Let’s not even get started on how toxic masculinity affects women and the queer community.

What Is And Isn’t Toxic Masculinity?

Let’s bust a few myths about Toxic Masculinity. Wanting to be muscular or strong is not a sign of Toxic Masculinity. But wanting to be muscular because you are a man, and thinking that if you don’t have them makes you less of a man is certainly toxic. Treating women as sex objects, not listening to or valuing their opinion, harming themselves if they fail at standing up to the established standards, homophobia, bullying those who slightly drift from the established masculine traits (such as wearing makeup, dancing, liking flowers or dolls) are other examples of toxic masculinity. Enjoying naturally occurring masculine traits such as beard, hanging out with their counterparts, playing a sport etc are not examples of toxic masculinity.

Imagine how cruel it is to tell a person that they can’t be low, weak, vulnerable or sensitive. Poor young boys believe it, even follow, make it a habit and then, it becomes a part of their life. It is these men who throw acid on women, unable to deal with rejection, get physically aggressive in a petty fight to show their power, restrain themselves from crying in front of their peers and female counterparts. The list doesn’t end any sooner.

But there are these men who struggle their entire life to get accustomed to these rules, fit in and be accepted. When they fail, they are trolled, bullied, abused and even isolated. Most of them eventually end up suffering from one or more mental illnesses, majorly depression, anxiety, gender dysphoria and the like. Of these, only a few of them seek help great difficulty. But, psychologists say a lot of them can’t even verbalize that they have depression or anxiety.

According to WHO, there are innumerable cases of suicide being reported all over the world of which men exceed women by thousands in number. Although women tend to have suicidal thoughts and non-fatal suicidal behaviour more often than men do, more men die of suicide than women.

In Actor Justin Baldoni’s words, it is exhausting to be man enough for everyone all the time.

Being sad or unhappy isn’t a sign of weakness. Being able to recognize what one’s feeling and expressing it is actually a sign of emotional strength. Gender shouldn’t and doesn’t stop one from being vulnerable or sensitive.

Wanting to dress up and wear makeup doesn’t make you any less of a man. Both men and women inherently possess femininity and masculinity in small portions respectively. Just like how women have testosterone, men have estrogen in their body. So, don’t suppress your feminine instincts. Feminine is not the opposite of Masculine. It’s just different. You needn’t be the strongest, bravest or the most confident ‘man’ out there. But, if you want to, then be brave enough to be vulnerable as well. Be strong enough to talk about your insecurities, at least with your male counterparts. Be confident enough to listen to and value others’ opinion.

You can be and say however and whatever you feel like, as long as it’s not physically and mentally abusive. You don’t have to do it all by yourself. It’s okay to seek help. Don’t get paralysed if you have to talk about your failures. Realise the strength of your partners and don’t be shameful to rely on them to share your responsibilities.

You are not entitled to play a role that somebody else has assigned for you. Period.

I would like to end this article with a beautiful quote by Abdu’l Baha – The world of humanity is possessed of two wings: The male and the female. So long as these two wings are not equivalent in strength, the bird will not fly.