[VoxSpace Life] ‘The End Of Reason Sale’ – A Tale Of Yesteryear? 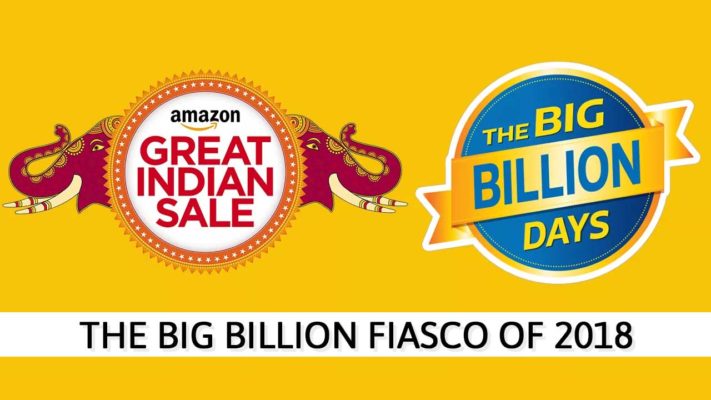 As Naye India Ka Shopping Pattern Is On The Verge Of Extinction, An Eulogy For The Sudden Adieu

2018 has been a landmark year for major e-commerce sites, it has been a tug of war between Flipkart’s Big Billion Day and Amazon’s Great Indian Festival Sale. The recent government norms that jolted the two e-commerce sites, however, painted the most unanticipated denouement, a game changer of sorts. The revised policies have a far greater implication than the obvious loss of buyers and revenues. It comes as a relief to the Indian traders who were floundering since long, in front of big discounts and GST.

Beyond the trinity of roti, kapda and makan, Flipkart-Amazon formed the narrative of the Indian Dream, the aspiration for status quo. “Wishlisting” became more than a mere marketing strategy in the hands of e-retailers, a propellant to ignite this Indian dream. E-commerce websites like Flipkart and Amazon specifically catered to this consumerist rising middle-class population, leapfrogging offline retailers, and major commercial behemoths.

Generally, shoppers tend to “wishlist” an item with the hope of receiving an even better discount on it or buying it at a more favourable time. These sites primarily burgeoned selling the concept of upward mobility of middle-class India through the sheer acquisition of commodities and it worked well for almost a decade.  Flipkart-Amazon up until now had been selling the homespun Indian dream “naye India”, without costing us an arm and leg. This thriving growth of e-commerce in the country has subsequently derailed Indians’ traditional buying pattern, for good or bad.

E-commerce sites have equally splurged on our shopping excursions, rewarding India’s growing dependency on the online fairyland. Advertisement wise, Flipkart’s har wish hogi poori becomes the crux of this Indian dream, the liberty to become anything. Amazon’s Hindustani dil kehta hai aur dikhao subtly honours the inviolable affinity between class and its ostentatious show-off, turning out to be an instant hit with the buyers.

No wonder that the e-commerce monopoly has been targeting major social media channels for pop-up ads, spinning an intangible cobweb for e-shoppers who are enthusiastically lapping it up too. The discounts have even baffled the tax authorities, who are yet to stamp a definite tax code on e-commerce.

The easy-peasy and engaging interface that allows buyers to inch ahead with trending products has seen customers coming from tier 2 towns as well as lower income group. This shift in shopping pattern is not just apparent in the affluent middle class, but the entire smartphone drove households. This naya India had its reach to the remotest fringes, dissolving the disparity between India’s rural and urban mass.

Perhaps the fine blend of latent yearning to catch up to their urban counterparts went hand in hand with advertising campaigns like #SabAmazonWaale. It became an instant hit in a country where the class disparity is most strongly felt in consumption pattern. A plethora of choices on these sites has made online shopping the best of both worlds.

“Every Diwali has been much better than the previous one,” – Vice-President of Amazon India, Manish Tiwary to media.

Flipkart-Amazon opened an extensive dialogue with India’s myriad population, divergent choices, and class disparity into one unified whole, unprecedented in the country! Some of the hashtags using colloquialism like #AbMehengaaiGiregi and #MomBeAGirlAgain struck the right chord with their storytelling capacity. In the end, it all boils down to selling products harping on the positive customer sentiment.

The plummeting sales might overturn the prediction that the Asia Pacific region will provide the largest dais for online retail sales. It is a massive blow to 3% of the total population of India, the middle class, who depended on instant cash back, and no cost EMI for coveted products. Small town customers were given the viability to afford comfort and luxury, forming the nuclei of e-commerce’s social connect.

Prior to the Assembly Elections, the curb might hurt the foreign investors but would definitely help the government to bank on a synthesized, local trading community. However, it has subsequently curtailed down a middle-class shopper’s fervent buying indulgences. It is plain as day that the “end of reason” discounts, that prompted around 80,000 jobs by Flipkart during the peak festive season will mostly suffer the burnt.

“The Big Billion Days is India’s own shopping festival and as a homegrown company, we want it to have a positive impact on the entire ecosystem. Along with ensuring our customers have a seamless shopping experience, we are playing an important role in driving the industry and subsequently the economy by generating employment and enabling our sellers to scale their businesses during this time” – Kalyan Krishnamurthy, CEO of Flipkart.

What Can Be Hoped From The Smart Cookies Of E-Retailing?

As Amazon takes off products from the shelf, finicky shoppers would require to undo their trust and confidence they had sowed over the years into absurd discounts. Flipkart-Amazon’s ballooning of market growth is most likely to be hampered, subsequently ensuring a negative impact on market penetration of consumer goods in the low-income sectors.

Therefore, the last straw of hope remains in innovation through which customers will be able to avail the discounts. Amazon has been speculating to reduce the lump sum commissions it receives from preferred sellers and pass it on to customers. Similarly, Flipkart might need to restructure its existing rewarding strategies to sellers, encouraging them to adorn their palate with discounts.

“This festive season, the discounts will be majorly funded by the sellers at the transaction level for categories like home decor, handicrafts and kitchenware, whereas for categories like electronics and appliances, it will be funded by e-commerce companies (in the form of cash backs) due to very thin margins at the seller’s end” – Dhruv Goyal, co-founder at Exclusive line, online home décor selling site.

One thought on “[VoxSpace Life] ‘The End Of Reason Sale’ – A Tale Of Yesteryear?”