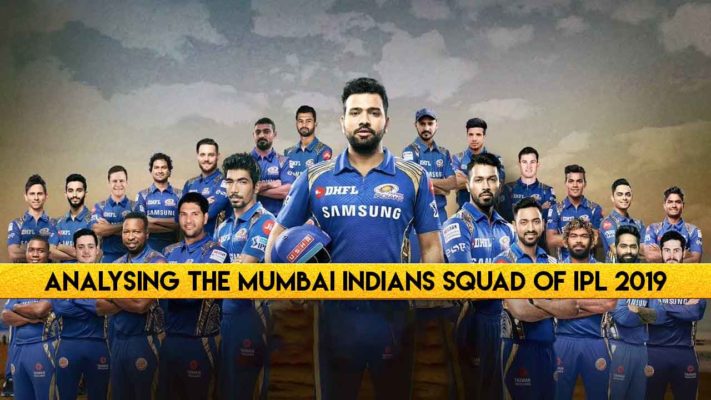 Whenever we hear the name Mumbai Indians (MI) the first word which we associate with it is ‘Star.’ The Mumbai Indians team is like that rich friend who buys only luxurious and branded items. Their team is filled with many star players from national and international teams, who have contributed majorly over the years. And that is seen clearly in their performances across different IPL seasons. They have lifted the IPL cup thrice in 2013, 2015 and 2017. Although being a very strong team on paper, Mumbai Indians have some issues which they should address and rectify before the IPL 2019 commences. Despite that, what gives this star-studded team the chance of lifting the cup in IPL 2019? Read along!

One thing which MI has done right from the start is to get big names in the squad. Over the years they have bought players like Sachin Tendulkar, Sanath Jayasuriya, Lasith Malinga, Shaun Pollock, Harbhajan Singh, Kieron Pollard, Andrew Symonds, Zaheer Khan, Dwayne Smith, Rohit Sharma, Ricky Ponting, Glenn Maxwell, and the list goes on.

Most of these players were not only in their prime form, but also they were the MVPs of their respective home teams. Not only the team players but, the team management has also had stars in it, with the likes of Shaun Pollock, Robin Singh, Anil Kumble, Jonty Rhodes and Ricky Ponting donning different roles over the years. And with the likes of Mahela Jayawardene and Shane Bond in the current team management, they have still maintained that.

But as we know, with great power comes great responsibility. And MI took some time to understand that and set their team culture and create an ethos which would make sure their performances were collectively contributing towards the win. That was seen in their journey when they went on to feature in the finals and finished as the runners up in 2010. This was just the beginning as they started to feature in the playoffs regularly from the next season onwards.

Strengths And Weaknesses Of MI

Mumbai Indians’ biggest strength has been their bowling, especially their death bowling. In Jasprit Bumrah and Lasith Malinga (added to the team this year), they have the world’s best death over specialists in their squad. And to complement that, they have some really amazing all-rounders like Kieron Pollard, both the Pandya brothers and Mitchell McClenaghan. Apart from these seasoned allrounders, MI have many players with varied skill sets like Ben Cutting, Ishan Kishan and Yuvraj Singh, which would allow the management to go with different team combinations when required.

Mumbai Indians have strong batters like Rohit Sharma, Suryakumar Yadav, Evin Lewis and Quinton De Kock, who can anchor the innings and be destructive if required. These players along with the likes of Yuvraj Singh and Hardik Pandya also provide that extra flexibility to the team’s different plans. Along with the flexibility in the team, MI have a set of good back up players to fill in perfectly when required.

But one issue which MI would not want to repeat is the batting form of their captain Rohit Sharma. Rohit has done extremely well with his captaincy in the previous seasons but has failed to deliver with the bat on many occasions and that has hampered with the team’s plans. If he starts playing according to the calibre he has then MI will be the most lethal team in the IPL.

The star power of Mumbai Indians works both as a boon and bane for them. They are a very strong side on paper with all these big names but have somehow failed to come together as one team and play to their merit on many occasions. Also, they have a problem of plenty. They have so many national and international players in their squad that at times it gets difficult to decide the ‘Playing XI‘. This year they have players like Jason Behrendorff, Adam Milne, Ben Cutting, Aditya Tare etc. who might be warming the benches despite being quality players.

On many occasions, it has been Mumbai Indians’ story where they start the tournament losing all their matches and right in the middle of the tournament they start winning matches and end up going to the playoffs or go on to be the champions. The team management experiments with the playing XI in the initial matches and takes time to understand the perfect combination which would work for them as the tournament progresses. They have been inconsistent with their performances as a team on many occasions but quickly turn around into a winning team. They have done extremely well under pressure and have won matches which were close to impossible.

For example, in 2014, MI didn’t start on a good note as they lost five matches in the UAE leg but made a comeback in the Indian leg by winning some of the matches. And they were in a tight situation when they were fifth in the table with 12 points and had to win the last league stage match by a big margin against Rajasthan Royals (RR), who were in the fourth position with 14 points, to jump to the fourth position and grab a spot in the playoffs.

RR set a competitive target of 190 runs which MI had to achieve in just 14.3 overs to improve the net run rate and latch onto the fourth position. MI could just manage a tie with RR in 14.3 overs courtesy Corey Anderson’s blistering knock of 95* in a mere 44 balls. But after some calculations went in, everyone got to know that MI needed a boundary off the next ball to claim that fourth spot. In came Aditya Tare who hit a six on his first ball, which was a full toss bowled by James Faulkner. Due to that six, they reached the playoffs of IPL. But, eventually, they lost against Chennai Super Kings in the eliminations.

Although this has become their mantra and has worked over the years, this is something which will be running in their mind this season too, which they wouldn’t want to repeat.

Players To Look Out For

Mumbai Indians have many players who can be and have been match winners on different occasions. Apart from the seasoned performers like Bumrah, Hardik Pandya and Pollard, they have bought players like Malinga and Yuvraj Singh who are proven match winners. Although both have not been in a great form recently, we know what they are capable of.

They have an immensely talented leg spinner in young Mayank Markande who can be their X-factor and turn the match on his own. He will be an interesting player to watch out for. Also, Ishan Kishan is another prospect who did well last year and will be eager to show his mettle this year as well.

There are players like Siddhesh Lad and Anmolpreet Singh who have performed well in the domestic season and in the first class matches, but they might not get too many chances owing to the more experienced players MI has.

So, these are some points about Mumbai Indians that may or may not work for them. It will be really interesting to see how well they rotate/use their star players in the upcoming season of the IPL. As this factor will play an important role in their strategy to win the cup.

All the best team Mumbai Indians for IPL 12. Cheers.