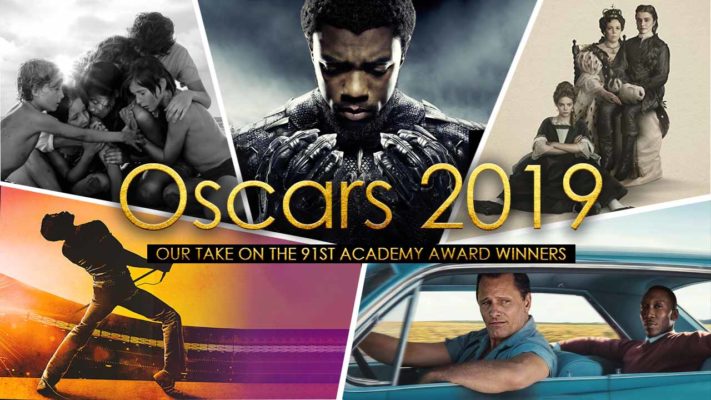 The Oscars happened and I guess people care. I don’t really know. All my life, I have been conditioned to believe that the Academy Awards are the gold standard for awards. They always felt above the petty politics of every other awards show. But, ever since the new introduction and removal of the ‘Best Popular Film’ category or the hosting controversy and most of all, ever since I looked more into the Miramax lobbying controversy, the Oscars have lost the value they once held.

Even with my low expectations, this year was even worse due to the lack of great films. Don’t get me wrong, there were some great films, but not enough. Films like Roma and The Favourite are masterpieces, but they were put next to the likes of a boring propaganda film like Vice. But still, I won’t give my opinion on who deserved it and who got snubbed. So, let’s begin.

People don’t really care about these categories because of the lack of glamour quotient attached to the people behind the scenes. But, as a film-maker, these are fascinating to me. Bohemian Rhapsody won for editing, but, I think Blackklansman deserved it because of the beautiful balance of comedy and social commentary that the editor mastered. The rest of the categories like cinematography for Roma, make-up for Vice and Visual effects for First Man were pretty much a given. I had hoped Roma would take home Production design, but Black Panther deserved it too.

Bohemian Rhapsody took home both SFX awards. I actually think Roma should have won both sounds-mixing and editing due to the absolute mastery of the soundscape created for the film, but they gave it to the boring biopic. As usual, the Academy voters went for the safe bet. Love that A Star Is Born took home the award for best song for Shallow. I was elated that Black Panther took home the best score award due to the brilliant score.

Most of the awards in these categories were locked from a long time like Mahershala Ali, Olivia Coleman, Rami Malek and Regina King. But it would have been fair if the Best Original Script would have gone to The Favourite rather than Green Book. While Green Book does have a great script, it is just that The Favourite is so daring with the tone and the kind of story it is telling that I thought it deserves it more.

The best director obviously went to Alfonso Cuaron for his tour de force Roma. A well-deserved award for a master at the prime of his artistic career. There was no other contender even close to the artistic brilliance of Roma.

Now, here I have my biggest problem, the best picture going to Green Book is just plain wrong. The Academy chose the film because it’s the safest of them all. Clearly, The Favourite or Roma deserved it. And, because Roma already won Best foreign language film, this award should have gone to The Favourite.

Finally for my closing words. Congrats to Rayka Zehtabchi for representing India and winning Best Short Documentary for Period – End Of Sentence. Also congrats to Mr Cuaron for winning both cinematography and directing awards in the same year. A feat nobody is going pull off in the near future.

Actress in a Supporting Role — Regina King, If Beale Street Could Talk

Best Actress in a Leading Role — Olivia Colman, The Favourite

Related posts:
[VoxSpace Life] Menstruation : I Don't Have A Problem Talking About It? Can You Come Out Of Your Tab...
[VoxSpace Life] India’s Resistance To Unconventional Career Choices
[VoxSpace Selects] Barah By Barah : A Unique And An Interesting Film Which You Can Be A Part Of