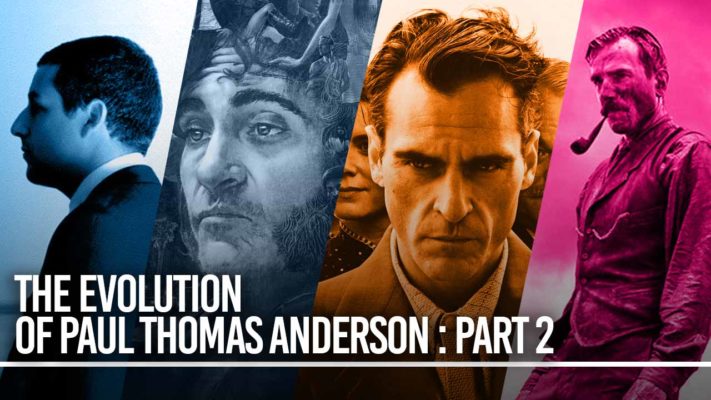 In most of Paul Thomas Anderson’s films, one theme that seems to be pretty constant is the idea of a man obsessed with a seemingly unattainable goal. This theme has been explored in his previous films (Magnolia and Boogie Nights) to an extent. But, due to them being huge ensembles, the idea gets diluted in all the different story arcs. But after he made the choice to change the way he approached filmmaking, this theme becomes very apparent in his later films.

In his own words, about Magnolia, he said- “I really feel … that Magnolia is, for better or worse, the best movie I’ll ever make.”  For better or worse, he had got to a place in his life where he could demand anything he wanted, due to his previous work. In this process, he met Adam Sandler, who turned out to be the perfect muse for his next project, Punch Drunk Love. You wouldn’t think that PTA would be a huge fan of Adam Sandler, owing to his back-catalogue of work. But it turns out that he is. So, he went on to make his shortest and most earnest film with him.

In this film we see him applying a lot more restraint to his style. While it is very stylistic, he keeps the pacing mellow and not super-fast like his previous films. He takes the general persona of many of Adam Sandler’s characters and attempts to deconstruct them to great effect. This marked his transition from ensemble casts to having a very clear protagonist. This allowed delving deeper into a character’s psyche. Even though the film is a comedy, it is a brilliant character study of a man who suffers from extreme social anxiety.

In the early stages of any great director’s career, the aim is to make a mark for yourself. So, film-makers tend to make their films as accessible as possible. This results in them trying to emulate their favourite film-makers, in his case Martin Scorsese and Robert Altman.

Now that Paul Thomas Anderson had proven that he could attempt and master something that was not as frantic as his earlier films, and had a certain amount of restraint. He went on to start prep on his most ambitious film to date, There Will Be Blood. This was the story of an oil baron, during the 1800s, on a ruthless quest towards wealth. For this film he got the great Daniel Day-Lewis to play his most iconic character, for which he even won an Oscar.

The clear change you can see here is that there are no crash zooms or frantic montages or popular soundtracks. The film is a lot more secure, slowly paced and self-assured in its style. Here you start seeing the real PTA expressing himself with zero self-doubts. The result of which is a dark brooding portrayal of what greed and excess can do to a person.

The film opened to wide critical acclaim and gave him the confidence to go in the same direction. His films after that got a lot more insular and less accessible. This, in my opinion, is not a bad thing, it just means that he really found his own unique style. The style being so original, that it takes time to seep into our understanding of the world. He went on to make more films that were a lot more character driven, steadily paced and filled performances that were endlessly watchable. These films included masterpieces such as The Master, Inherent Vice and Phantom Thread.

In this journey through his filmography, you can see the evolution of a film-maker who was infatuated by the style of his masters, to him finding his own unique style of telling stories. Hope this brief appraisal of Paul Thomas Anderson interests you to seek out his films and maybe, you could see this pattern in many of the work of great film-makers of today.

Related posts:
[VoxSpace Exclusive] Anatomy Of A Crime : Episode Three - The Woman Who Ate Seven Hearts
VoxTalks With Shreenath Muthyala : An Artist For The Modern World And A Genius Aboard A Revolution
[VoxPix] Mom : A Movie That Needs To Be Understood As A Social Education Than Just A Movie