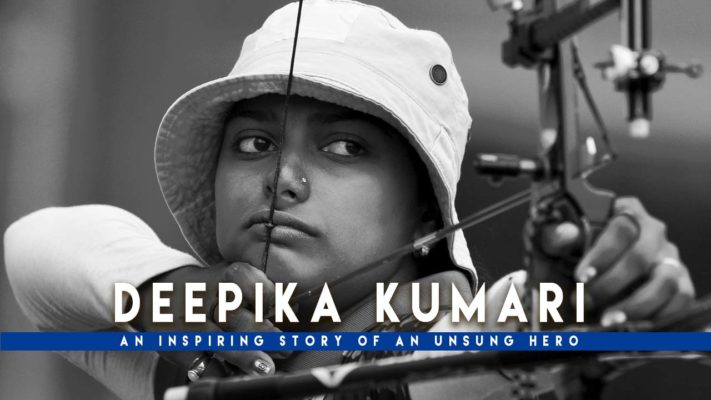 I was randomly scrolling through Netflix to kill some time one afternoon and accidentally came across the trailer of a Documentary called Ladies First. The trailer was interesting and so I went ahead and watched the entire documentary. This forty-minute-long documentary follows the subject for a period of three years and is made beautifully.

Now, who is this documentary about?  Former world No. 1 and world No. 5 at present, renowned Indian Archer Deepika Kumari. Not many people in India, including me until I watched the documentary(guilty pleaded!), know that Archery is a sport and that it’s even a part of the Olympic Games held every four years in various countries. And a lot of us also don’t know that India competes in that category with a team. It’s obvious that in a country where there are only two religions, Cinema and Cricket, sports like these have no space for popularity and exposure.

But it doesn’t stop there. It’s not just popularity or exposure that these ‘other’ sports lack. There’s so much more. Resources, support, equipment, trainers and mental coaches are just a few things in the list. Despite these hindrances, Deepika Kumari paved her way to becoming world no. 1 when she was just 17.

Pool Of Problems And Immense Perseverance

Hailing from a small village in Jharkhand, Deepika’s life was not an easy ride right from the beginning. She belonged to a struggling lower-middle-class family in India. In the documentary, she mentions that the very reason why she left the house to join the TATA Archery Academy was to lessen the burden of their parents. The Academy didn’t charge any money and provided basic amenities.

With a strong desire to achieve something and stand on her own feet, Deepika trained for hours together in a day. Winning gold medals in almost every competition that she participated in, Deepika went on to become World No. 1 in 2012.  The irony is that not many people covered her story except for a few eminent Media houses. She was even awarded Padma Shree in 2016 for her achievements.

Why Ladies First Is A Must Watch?

After watching the documentary, I tried to find some more information about her and surfed through various sites in vain. It’s disturbing to know that such inspiring stories are not covered widely. Even the smallest gesture of a renowned cricketer makes headlines and exceptional achievers like Deepika and their stories are not given the applause and importance that it deserves.

Hence, this documentary is a must watch for

1. It shows that ‘Anybody Can Achieve’,

2. It’s important to laud such individuals and respect their struggle.

Ladies first directed by Uraaz Bahl and Shaana Levy Bahl is India’s first Netflix Original Documentary. It has a gripping narrative and is a beautiful portrayal of the struggle of an ambitious girl from a small town in Jharkhand. This documentary meticulously presents the struggle of an athlete through the ups and downs of the journey along with the before and afters of the competitions and how they affect an athlete professionally and personally is both interesting and sometimes painful to watch.

It talks about so many things apart from Deepika’s journey. The patriarchy, not so encouraged girl’s ordeal from small towns and their journey, lack of facilities, resources and proper psychological support to build overall strength for the game. Media’s unwanted attention during wrong times and ignorance during bright victories and what not. It’s a Reality check and an eye opener in many ways.

Deepika Kumari has now built an Academy with a mental coach. She is standing as an inspiration to thousands of girls in her town and across the country. With almost zero resources and minuscule support, this Archer is pioneering a systematic change to the sport in the country and I can’t help but wish her all the luck for Rio Olympics 2020.

Related posts:
[VoxSpace Life] Anatomy Of A Legend : Celebrating Muhammad Ali, The Boxer And The Poet
[VoxSpace Life] Breaking Barriers : Addressing Challenges Faced By Women Entrepreneurs And Much More
[VoxSpace Life] The Sad Reality Lurking Behind The Mantle Of The Anti-Trafficking Bill