[VoxSpace Selects] India And Its Dwindling Relationship With Free Press 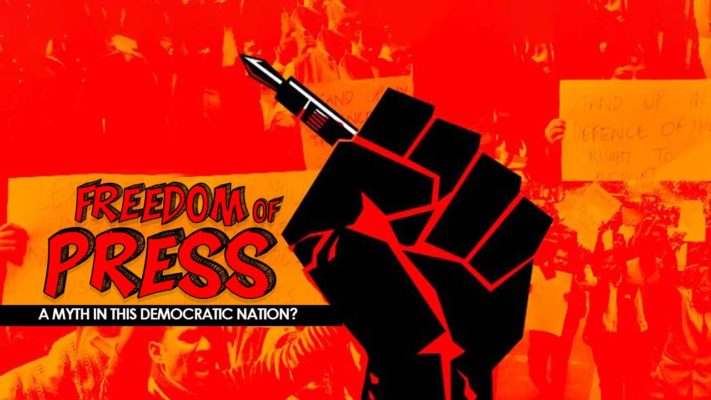 Journalism in India has become one of the hardest jobs in the modern world. After the report that was published by Reporters Without Borders (RWB), India has been ranked 140 in the 2019 World Press Freedom Index, marking its continuation as a highly difficult place to publish news freely. The rankings have been steadily going down through the years. We have already lost 2 points since 2018. With the way things are right now, we can expect the decline to continue.

There have been attacks against journalists online as well as offline. The violent attacks that the journalists are facing come from not only the criminal element present in India but also by the police and corrupt government officials. There has been an increase in the attacks against non-English speaking media outlets that are present in rural areas.

What Exactly Is The RWB?

The Reporters Sans Frontières (RSF) or Reporters Without Borders (RWB) according to its website is the world’s largest independent organization dedicated to promoting free press. RWB has an active network of correspondents in over 150 countries. They have been registered in France as a non-profit organization. They have a consultant status at the United Nations and the UNESCO.

Their main goal is to promote the freedom of the press in every corner of the globe. It has 10 offices worldwide. They tend to work closely with regional press freedom groups from all over the world.

The Current State Of Journalism In India

During the year of 2018, the number of journalists killed in connection to their work from what was verified is Six. There has been a seventh case which has raised doubts as well. Journalists working in rural parts of India are more likely to be injured or killed while doing their job according to the RWB.

The RWB has also stated that there has been an increase in violence against journalists in the run-up to the general elections that are taking place in the spring of 2019. They have also expressed that criminal prosecution is using the Section 124a of the penal code in order to gag journalists as under the 124a code “sedition” is punishable by life imprisonment which causes journalists to fear for their life.

Journalism Downgrading Around The World

According to the RWB, the coverage of regions such as Kashmir continues to be very difficult for foreign Reporters. The main reason for that is, they are barred from the area and internet access is often disconnected. There is also the fact that #MeToo movement has shown many cases of harassment and sexual assault.

In the 2019 World Press Freedom Index, India was not the only country to be lowered in its grade. The U.S went down 3 points putting it in a “Problematic Country” zone.

Journalism is becoming harder not only because of the various bans and violence but also due to the loss of trust from the people. There has been a lot of change in the way the public used to see the media. Clearly, one of the priorities the press should have is getting the trust of the public back. The violence that it faces now is the main concern that we have to solve.

In the end, while the job of a journalist is now assiduous it is still very much necessary. People need a free press to live in our society and I hope that we are able to overcome these hurdles placed in front of us so that we can create a better world.

Related posts:
[VoxSpace Life] Death Of Innocence : An Overview Of Syria And Its Ongoing Conflict
CAN I HAVE YOUR MOBILE NUMBER,SIR? – The Billion Dollar Industry Of Privacy Hacks Uncovered
[VoxSpace Selects] Prateek Kuhad: The Flag Bearer Of Soulful Indie Music