[VoxSpace Selects] Nityan Unnikrishnan : ‘The Way Out’ of Mainstream Art

Nityan Unnikrishnan’s new work, ‘The Way Out’, lies open for all in an exhibition at the Chatterjee & Lal in Mumbai until 27th April 2019. In his unique style, the artist puts together myriad places and personalities almost as if to bring out each detail of the world that lies within the macrocosmic reality. Unnikrishnan paints the city life swarming with people and the idiosyncrasies of the individual lives. He makes a subtle commentary through the interior and minute details of the domestic life. The artist’s devoted observation skills and dexterity to illustrate the surrounding reality of the world is evident in his artwork. Obviously, then, in a note to the press, the gallery had stated about Unnikrishnan’s art, “However, the sense of the familiar ends almost without us realizing it. Unnikrishnan branches off from conventional representation, adding a surreal visual vernacular that takes us into mindscapes and emotive states.”

Similar to many of his earlier works, Unnikrishnan’s recent collection presents certain motifs that are readily identifiable. Among these are Michelangelo’s David, Ambedkar, Patel, Gandhi, Durga, structures like Ambani’s Antilla and the Jama Masjid, ships, fish and food presented on tables. Even then he creates anomalies as he grounds things that should be free and anchors things that should be let loose. There are two major characteristics to Unnikrishnan’s work. First, the artist has gone a mile extra in bringing minute details to life. Second, Unnikrishnan’s work has found its inspiration from Michel Foucault’s ‘Heterotopia’. It is a concept that can be explained as sites which, simultaneously mirror and invert, unsettle or distort other spaces. In such a condition, objects and people are positioned in a world that is diametrically opposite to the one in which they are originally placed.

On asking Unnikrishnan about the idea behind his concept of ‘The Way Out’, he had said, “I suddenly realized that I am a middle-aged man. My hair is gone and my knees hurt and I see the makings of a grumpy old man in the near future. The books I have been reading in the last few years have not helped matters. And what I read in the papers every day has made it much, much worse. And then there is the small world that I call my own, my friends, family. That is also dwindling in numbers, with people only growing older. So, that is what it is about.”

He further states about the significance of the work’s title, “Imagine having a simple thought or an image in your mind and going with it to where it takes you. That is more or less the idea behind the name — a thought or an idea as a point of departure”.

The Art In The Making: On Unnikrishnan’s Creative Process

When it comes to tongue-in-cheek humor, there is no one like Unnikrishnan. Even the blandest of the blandest statements could be inverted by his sense of humor. Point of instance –Unnikrishnan talks about his “normal” life as he says, “I lead a very normal life. I wake up in the morning, have coffee, get angry reading the newspaper, and then get to work”. Unnikrishnan likes to work at a pace that is slow and painstaking. His choice of surface and medium is like his art –unforgiving. He prefers his ink and watercolor that gives him one chance at a time. 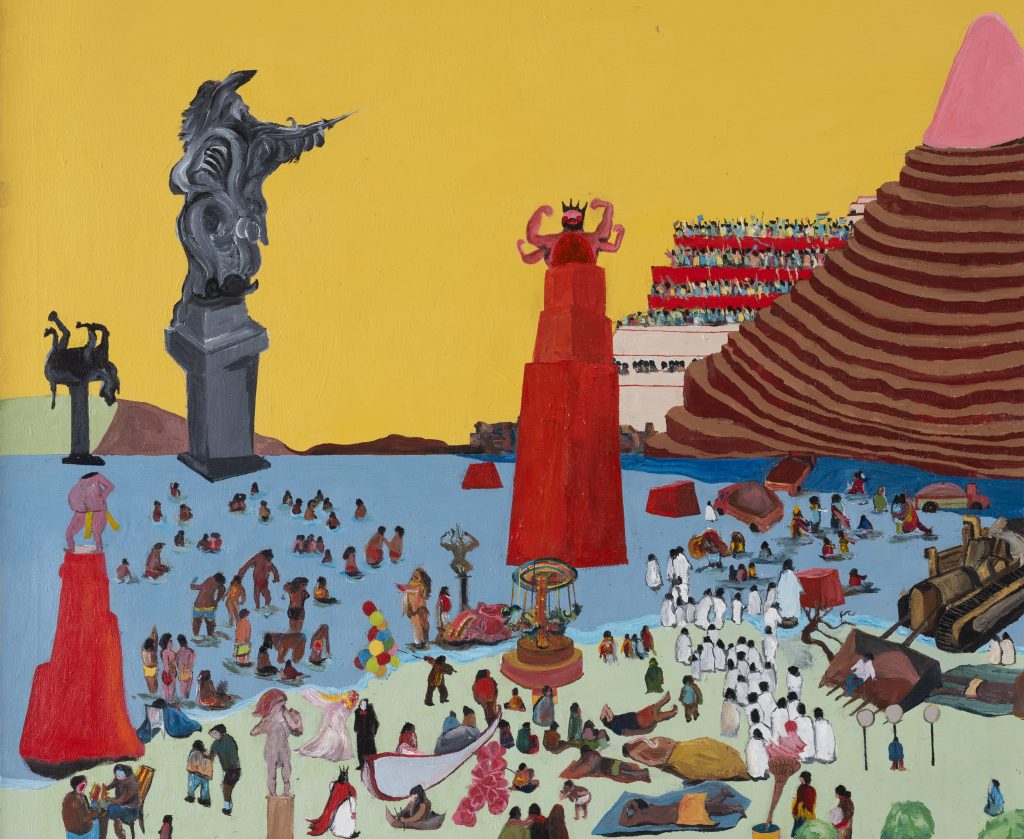 Furthermore, why Unnikrishnan chooses to work at a slow pace is because he is not one of those to map out or plan his work in detail. The fundamental idea is there and then there is an evolution in the work. The clear image surfaces as Unnikrishnan moves along. Unnikrishnan’s creative process engages an excessive amount of looking, thinking, pausing and gambling.

‘The Way Out’ Of Style

Unnikrishnan repeats, “I lead a normal life. I go for walks, I shop for groceries, I cook. I like cooking, but not for large numbers of people”. What Unnikrishnan does for us in his recent collection is that he cooks. He cooks through his sculptures and paintings and he does it with great talent. His talent is an “anti-skill” almost like Angela Carter had explained as “avoiding writing well”. Unnikrishnan’s “anti-skill” is to fight the prettiness of art. It provides that simple astringent under-taste that can bring completion to a complex delicacy. Such a tendency of enhancing the beautiful with the bitter can be traced back to great artists like Philip Guston, Francis Bacon and of course, Louise Bourgeois. Unnikrishnan bemuses his audience –between dramatic grotesqueries and beautiful exposé, between afterthoughts of wispy brushstrokes and bold illustrations.

In many of the sculptures and paintings of Unnikrishnan’s new art collection, he attempts the absurd. He freezes unfeasible architecture at the edge of collapsing down. Paints Kalidasa riding the surging branch while his axe is working its way between the trunk and him. Presents people on the beach, sunbathing under cloudy grey skies. In other paintings, people make salads and drink wine beneath paintings in which people have sat down for lunch. In another grotesque instance, a horse is balanced upside down on a pedestal and its legs are floundering like those in an overturned battle. Unnikrishnan’s art forces his audience to ask –is this the real world in which we are living? Or is it someone’s nightmare, longing, and regrets in which we are trapped? Unnikrishnan talks about his inspiration for his new collection when he says, “I have an interest in the present and the world we live in. So, I had to have an interest in the past. I use events and people as anchors or resting places, to create a sub-story or to take a new route in a work. So, it is not just personalities, there are also places, buildings, and objects that I use as resting points in order to take off again”. However, Unnikrishnan’s creative abilities come with their own challenges.

When asked about the challenges he had to face in bringing into fulfillment his new collection, ‘The Way Out’, he reflected, “I trained to be an industrial designer, not an artist. So this time when I got back to ceramics for my sculptures, it was a new place to be in, to think of form, details, and hardware, surface finishes and so on like I used to do 10 years ago. And then to suddenly realize that I am using all those things for something completely different in terms of what the final object meant for, though those were not challenges, it was more like an excitement”.

Taking The Audience Out Of The Comfort Zone

Unnikrishnan’s art in his new collection comments subtly, if not directly on the contemporary events. It is a strange art, but we live in a strange world, with monuments, buildings and people pushing each other for space. Unnikrishnan mentions, “From what I sense of cities, they are the same. New buildings with the same people doing the same jobs and wanting the same things. It is only the margins that are different, but margins do not matter”. He puts his audience at unease. Their minds are filled with restlessness and their hearts are filled with dejection. However, Unnikrishnan denies such an effect when he says, “My heart is not restless. It is fine. I apologize if I gave that impression. I can’t think of one thing to be upset about, really”. Even then, one cannot help but be upset –at the reality, at the world.