Posted on September 22, 2019 by Siddharth Naidu 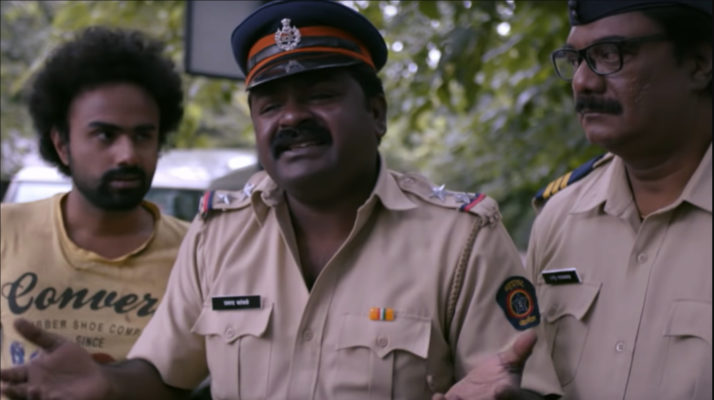 The First New Step In The Right Direction

It’s been an interesting year for Police-based stories. On one hand, you have the bleeding and grunting Sardarji, (Sartaj Singh) of Sacred Games, who is bent on saving the world from impending doom, and on the other hand you have the chest-thumping Nationalistic tale of ACP Sanjay Kumar of Batla House. Both of them work in their own zones, but then there is something super fantastical about these characters, that as an audience you need to make an effort in getting to know them, their objectives, and their journeys. In midst of this hyper make-believe world of Police and misplaced Justice, the average audience often forgets to see the law upholders as a collective of people who approach their duty as a day job. Enter MXPlayer’s Pandu. The series which released on the streaming platform last week, tells the story of Mumbai Police in all its unassuming regularity and in doing so makes you wonder not just about a rapidly changing world but also the people inhabiting it.

The People Behind Pandu…

MXPlayer’s Pandu, produced by Bharatiya Digital Party, and brought to life by Directors Sarang Sathaye & Anusha Nandakumar, tells the story of Sub Inspector Sri Prasad Kamble (played by Suhas Sirsat) and his colleagues at work, specifically Hawaldar Gaikwad (played by Deepak Shirke), Constable Choudary (Prajakta Salbarde), Constable Pawar (Ganesh Ghadi), Constable Thambe (Somnath Limbalkar) and to round it off DCP George Fernandes (played by Abhish Mathew). Now, the series made predominantly in Marathi, speckled with regional quotes and quirks, never fails to resonate to a general consciousness of the people who are wary of Police Department.

As the series opens, in the most non-ambitious manner much like its tone overall, we see Kamble just praying randomly and loudly to God, while his son deduces that something must be wrong. A prayer associated with not duty, but with some unforeseen discomfort. The scene speaks volumes about the personal pathos that Police Department faces, in a world which is slowly becoming senseless. The writers of the series, Gaurav Pawar and Noel Cordeiro make you realize that the topics that are being spoken about, need to be pondered upon in serene silence. They take the route of infusing dry circumstantial humour, making all the pathos, all the more palatable. However, what stands out as perhaps the biggest achievements of this series, is the fact that Kamble and his world, is filled with living characters which seem not like someone wrote them, but that they just strolled onto the set. Brilliant casting choices, both major and minor, infuse the viewer with unexpected freshness from the series.

A Star Is Born – Take A Bow Suhas Sirsat

While on the topic, this year has been especially rewarding for proficient actors with truly potent roles written for them on WebSeries. We’ve had Sobitha Dhulipala in Made In Heaven, Jeethendra Kumar aka Jeetu Bhaiya in Kota Factory, Ranveer Shorey in Metro Park and so forth. Add to that list, Suhas Sirsat’s meditatively measured performance as Sri Prasad Kamble in Pandu. The actor, deprived of any sort of vanity, internalizes the role with such subdued reverence that it is hard not to root for him in any given scene. With battered sunken eyes of a weary Police Officer all through, Suhas Sirsat, yet maintains a calm about him which is palpably comforting on screen. In one moment, he is negotiating with a shoe dealer with a laid-back arrogance, while in an other moment actively understanding an old couple’s apathy when they complain about a ghost on their terrace. On one hand, he seems vulnerable when he just stares at the city questioning his own relevance, and on the other he allows himself to be lectured down by his son’s Teacher about future.

Ably supporting him is Hawaldar Gaikwad, who acts as his anti-thesis on most of the occasions, and as a pillar of support on the others. The one-off characters like Abdullah, The Shoe Seller (played with brilliant chirpiness by Sarang Sathaye), the MBA aspiring pick pocket, a too self-aware IIT-ian caught in drunk and drive, all add a thick yet creamy texture to the show, and help build specific moments in a show about lives at a metaphorical level.

What Pandu Gets Absolutely Right…

Often times, we see that the writers build a world so carefully that sometimes they just get lost in it, blissfully. Ambitions perhaps shackles them to think bigger and farther. That remained my complaint with series like Sacred Games Season 2 or even the recently released, The Family Man. However, I felt positively overwhelmed when I saw that the world of Pandu, is just his world. His troubles are his troubles, with no quick solutions or heroic conjunctures to them, or inorganic interventions to them. The makers refrain from unnecessarily glorifying the Police Department, but rather resort to patiently sit on a wooden bench, having a cup of chai and just happily observe it. The makers are interested in speaking about issues like Class Divide, Fatigue, Ambitions, Relationships and more, in a tone which is casual yet effective. Almost like a friend, than like a professor.

MX Player’s Pandu, like the tonality of the series, is an acquired taste. If you are someone who grew up watching sit-coms like Seinfeld or Curb Your Enthusiasm, you might find an instant connect to the familiar absurdity of the series and the subtle nuances of sketching out the characters. In a time and age of hard-hitting, pacy and ambitious dramas on web series, Pandu is a lazy pleasant breeze on a Sunday evening, prompting you to inhabit a middle class household, soak in the optimism of an everyday life, and also experience a certain nostalgic newness of simpler times, often forgotten.  If you have 2 hours today, watch this series right away!