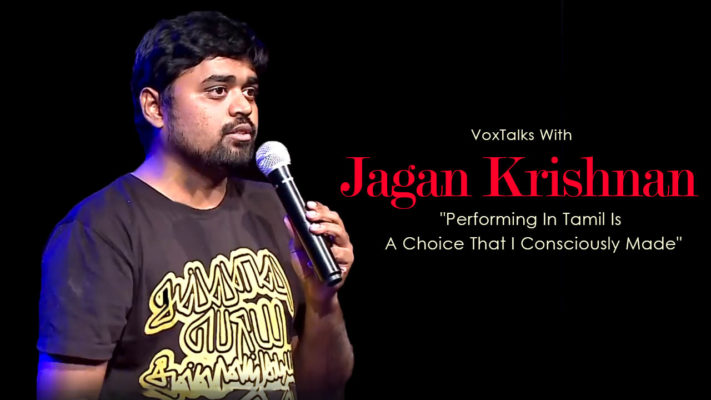 Stand-up comedy has tremendously seeped into our pop culture where people are trying to explore the different avenues of entertainment. Though most of the content finds its way on YouTube, WhatsApp forwards, Facebook, etcetera. But there’s nothing like enjoying a show at a café on a rainy weekend. This monsoon weekend, Jagan Krishnan, who is known to perform exclusively in chaste Tamizh, is set to leave us in splits, along with Mervyn. In an exclusive interview, Jagan Krishnan, a Tamizh stand-up comedian, and writer at Put Chutney, opens up about his writing process, why specifically using the Tamizh medium, his chemistry with Mervyn and many more. Here are the excerpts from our interview:

How did your journey start? Why did you want to enter the stand-up comedy scene? How was it when you first came in?

I performed in a comedy talent hunt held at a company I was working for and won the first place in stand-up comedy and second place overall. This, in turn, gave me a lot of opportunities to perform in events within the company which prompted to try it a little seriously. A fellow stand-up comedian, Manoj, who was working in the same company as mine, introduced me to the open mic scene in Chennai and that is how I began.

Since you perform in Tamil majorly, do you think it might restrict your reach perhaps? What are the pros and cons of it?

Yes of course. Apart from the Tamil speaking audience others will not understand and that is a choice that I consciously made. However, I feel very comfortable performing in Tamil because that is my native tongue and most of my humour, which is mainly personal stories and observations on pop culture, makes sense only when I do it in Tamil.

You have a very unique approach to your performances. You combine music and stand-up comedy in your acts. How challenging is that? And how do you prepare for it?

Thanks for mentioning it as “challenging” and not “hacky” :P. The challenging portion is to infuse comedy in music rather than just singing or playing an instrument well. I make it a point that most of the songs that I perform are inherently funny and mostly original. So, to come up with something like that will take a lot of time as one song/premise cannot be similar to another. Also, I don’t do a lot of parodies which means I have to create new tunes (at least something that looks like new :P) which is very tough for me.

A good set is when you find the right balance between writing and performing. Do you agree to that? And what is the writing process you follow? Can you take us through it?

Yes. I don’t “write” my bits. I get a thought and I perform it in front of a mirror till I know what exactly I will do in an open mic. Then I go perform it the exact same way I practiced and will record it on my phone. This recording along with the audience’s reaction is what I use to fine-tune my material until I feel it is ready. Any material that I have performed so far cannot be found in the written form.

With Oru Time Pakalam, what can we except (Specifically Hyderabad audience) this year? And how does your chemistry with Mervyn work since both of you have different styles?

If you know/love Tamil pop culture you will definitely love Oru Time Pakalam. In fact, the name of the show (big thanks to Alex and Baggy for the title suggestion) came about because it is a phrase that is closely associated with all sorts of reviews that circulate in social media and that is exactly what the show will be about – music, movies, YouTube, etc.

Mervyn and I started around the same time and we have done so many shows together before, so that is a big help. Before starting OTP (Oru time pakalam) we sat down and discussed how we want to do this show and during the course of it, we found the right balance which is what you will see. As you mentioned, we have different styles which adds a unique flavour to the show while we maintain the theme (if there ever is one) intact.

Over the years, Tamil stand-up comedy scene has grown organically. Being a part of it for some years now, how do you see this change? And how does the future of the Tamil comedy scene look like to you?

It is a very welcoming change and it looks like the only way is up.

Recently, a new comedy club was launched in Chennai, called SOCO. What is SOCO all about? What can we expect in the coming days?

SoCo – South of Comedy, is a brand-new comedy club in Chennai which is a joint venture between Evam stand-up Tamasha and Savera Hotel. It is just like any other comedy club but with a south Indian touch. It has a mural that celebrates south Indian comedy legends. It has one of the best vibes when it comes to comedy venues and I loved performing there. There will be more entertaining shows in the coming days, providing the scope to experiment for new talents and upcoming artists.

Do you have any specifications when you write your acts? Are there any particular genres or topics you like? Anything you avoid?

I don’t restrict myself to anything but I generally avoid touching topics that I’m too emotionally attached to.

In an age where memes spread like wildfire, making people laugh is a challenging thing. What are the pressures you face as a stand-up comedian?

Humour exists in various forms and they all have their own respective grammar. Stand-up comedy is a performance art and it has a grammar that is different from others. A joke that exists in a meme format might not work as a stand-up material. Also, something that is funny on paper might not actually be good when you perform it live. So, it is a continuous process of learning, trying, getting humiliated in front of an audience and repeating.

What all is lined up for you in the future? And what all can your fans expect from you going forward?

Hopefully more shows and many more funny videos. That is all I can think of now.

A. Your T-shirts are unique and usually black in colour- Is it part of the act? Does any planning go behind it?

I would like to call it part of the act but the most important reason is it makes me look leaner than I am :P. Also, the one that says “goose is bumping” is my merch available on fully filmy. I’ve been wearing it a lot because nobody else is. 🙁

B. In stand-up comedy, if you had to open for 3 comedians worldwide who would they be?

C. What happens when you wake up and you find out that you are Rajnikanth. What would be the first thing you would do?

Go back to sleep and wait for myself to change back. There can only be one Thalaivar.

D. If you were to perform in North Korea or other volatile regions, what would be your opening line there at?

“Inga evloperukkutamiltheriyum” (How many of you know Tamil here?)

E. What are the three things about Jagan Krishnan that not many people know?

Wicketkeeper in school cricket team (Also got selected to play for the district, but because I got selected, I guess, the district matches itself got canceled), used to write a lot of Tamil short stories and I love samosa.

F. What is that one joke that always cracks up people no matter what?

If you’re asking my joke, I’d say a bit that I’m currently doing about Santhosh Narayanan in my show. Unfortunately, I can’t say what it is, you’ve to watch it only in my show 😉

Jagan Krishnan and Mervyn will be performing at Heart Cup Coffee, Jubilee Hills (Hyderabad) on September 28, this weekend. May the odds always be in your favour and Harris Jayaraj is our Gurunathar too.