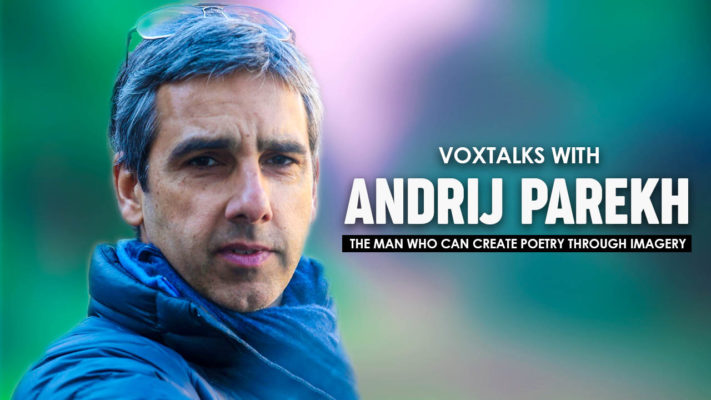 A Master At Using Light And Shadow To Tell A Story.

Andrij Parekh is one of the most adaptable and forward-thinking filmmaker/cinematographer working on the world stage right now. Andrij is of Indian and Ukranian descent who primarily works out of New York. His style varies seamlessly from film to film depending on the filmmaker he is working with. From ‘Blue Valentine‘ to ‘Madame Bovary‘ to the ‘Show Me A Hero‘, he is a cinematographer who cannot be pigeonholed. Recently, he was invited to join the American Society Of Cinematographers. He has also forayed into directing with the consistently brilliant Succession and the highly anticipated adaptation of Watchmen on HBO. We had the privilege to pick his brain about his process and philosophy towards filmmaking. Here are a few excerpts from that conversation:

Let’s start from the beginning, in your early work like ‘Half Nelson’ or ‘Speak’ you had this very naturalistic aesthetic and for films like ‘Madame Bovary’ or ‘The Zookeeper’s Wife’, you have a lot more formal approach. Could you elaborate a little upon how you decide on a style for a story?

That’s an interesting question and one that I’ve never thought of! I’ve always hoped that each project was shot in the way that the script called for – the camera work being married to the story in a very organic way. I think my lighting style has always been grounded in naturalism and simplicity, single-source lighting whenever possible. It’s perhaps what I’ve done with the camera that maybe feels a bit different from project to project.

‘Half Nelson’ was shot almost entirely handheld; I remember being deeply impressed by the work of the Dardenne brothers and John Cassavetes at the time – and it was such a revelation to me that cinema could feel so alive. ‘Madame Bovary’ was meant to feel entirely day and candlelit – but there are sequences that have quite a bit of handheld, and I was hoping to lend a very modern telling of a classical period piece. And the same for ‘The Zookeeper’s Wife’- with a hopefully feminine touch to a brutal story of war and death.

You have worked as a director and also as a cinematographer, which one do you prefer and why?

I love them both. I went to film school to be a director, but realized quite early on that I was terrified of actors, had no vocabulary to talk to them, and naturally gravitated to the camera. So, I finished with a dual major, in directing and cinematography, and then worked exclusively as a cinematographer for the last twenty years. On the HBO show Succession, on which I was cinematographer setting the look of the pilot, the possibility of directing came up – and I welcomed the challenge. It basically challenged the parts of myself that I had shied away from for so many years. So, I embraced the challenge and thoroughly enjoyed it. I did it again on the HBO show “Watchmen;” I shot the pilot and directed episode 4. And now I’m prepping a TV adaptation of Aldous Huxley’s “Brave New World” in London (as director). Strangely enough, I feel less decisive as a director but more at ease on set. HAHA

Also, are you interested in writing in the future?

What is your philosophy regarding filmmaking?

I think filmmaking is a beautiful art form to discover the truth in emotion. I’m interested in human stories, in human emotions and connection. I also think that filmmaking is essentially about an actor and a camera, and not about toys and budgets. I’m not a fan of mega-budget franchise movies that are simply entertainment. Cinema to me is more precious than that.

Blue Valentine was a very unconventional movie in terms of shooting. A lot of the dialogue in the film was reportedly improvised. You manage to capture those little moments with a lot of clarity, the same goes for Succession. How do you manage to do that?

I think as a cinematographer it’s very important to watch, to observe. There is no better training for a young cinematographer than a documentary, in which you are thrown into a situation where you have no control and try and make some beautiful images. You begin to look at where the light is coming from. You begin to think about what sort of mood the moment needs, then you place the camera and follow the action. I always shoot with one eye on the eyepiece, the other looking around for what the camera does not see. It’s a trick I learned in middle school science when looking through a microscope to try and avoid eye strain. That allows you to watch the actors and pay attention to what they are doing, both through the lens and also observing what’s not on camera- the hands, the posture, the feet, etc. Sometimes those elements of the body are as important to telling the story as the face.

You have worked on setting the look for both ‘Succession’ and ‘Watchmen’ as you shot the pilots for the same. What are the things you keep in mind while coming up with the look of a show?

The script, and what the director’s vision. I always like to begin my projects with a museum walk with a director- The MET in New York is such a gift for doing that. In a discussion of color, I begin to understand what the director is talking about when referring to a certain color, to contrast, to black levels, etc. It makes discussing and understanding so much easier when it’s all in front of you. It’s also wonderful to revisit the masters of painting. I think that is what cinematography should aspire to be.

‘Show Me A Hero’ is one of the most heart-breaking and truthful shows I have ever seen. How was your experience working with David Simon and Paul Haggis?

It was a very intense show for me; we shot 75 days and it was my first-time shooting television. I was used to shooting with one camera and we would often use three just to get through the material. “Light the Room, Not the Faces,” became the operating approach.

Is there a film-maker you would love to work with?

I would have loved to work with Kurosawa and Fellini. I’m still looking for a film-maker of that caliber.

You have been invited as a member of the prestigious American Society of Cinematographers. How do you feel about that?

It’s wonderful to be recognized by one’s peers. But as Groucho Marx said, “I’d never join a club that would allow a person like me as a member.”. I guess I’m in that club now. HAHA

What is the advice you would give to an aspiring film-maker?

Follow your passion and make the films you want to make. Not the ones that you think will make you a living- because then you will only be copying and not creating.

Can you tell our readers about five filmmakers or films that have influenced you the most and why?

His sense of humor and poetry and the search for the soul.

His mastery of the art form.

His commitment to the art form, and the epic striving to make such powerful films.

His comedy and irony.

His use of color and style.