Posted on October 7, 2019 by Srividya Vanamamalai 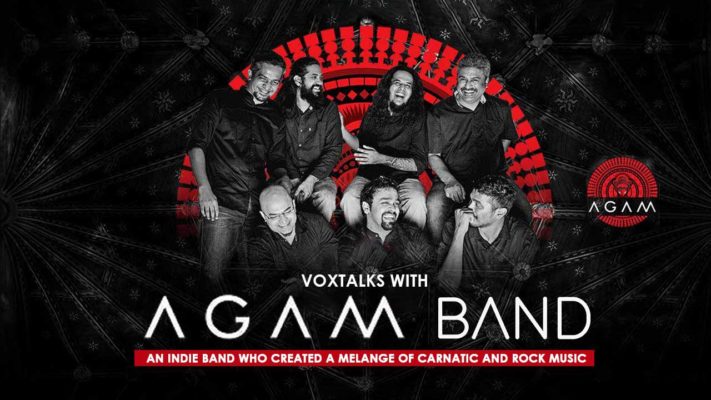 Agam is an established Indie band formed in 2004 by BITS Pilani graduates who have created a genre of their own- Carnatic Progressive Rock. It is a unique blend of Carnatic music of South India and Rock music of the West. They have a distinctive style of their own and have adapted various songs of Saint Thyagaraja, MutthuswamyDikshitar, etc and composed some of their own as well. They debuted in film music with Solo a Malayalam/ Tamizh film directed by Bejoy Nambiar. The band members include Harish Sivaramakrishnan (vocals) Swamy Seetharaman (keyboards and lyricist), T Praveen Kumar (lead guitar), Aditya Kasyap (bass guitar and backing vocals), Sivakumar Nagarajan (ethnic percussions), Jagadish Natarajan (rhythm guitar) and Yadhunandan (Drummer) with former members being Suraj Satheesh and Vignesh Lakshminarayanan.
We, at Voxspace, got to have a chat with Agam’s lead guitarist, Praveen Kumar about their foray into indie music, beautiful compositions and the future of Agam. Here are a few excerpts:

You have been quite active in the independent music scene, for a long time now. How different is it now as compared to when you started? And what were the major challenges back then?

I think in 2004, Harish and Ganesh started this, which was more like a home studio, not exactly Agam. It was like a passion for music, some music or the other was always there.  Most of us are from the same college- BITS, Pilani, different batches though.  In 2004, Harish and Ganesh, my seniors, settled in Bangalore and started a band. Slowly, Vignesh, Swamy and I joined this musical journey in 2006. In 2007, there was a competition held by Tamil channel, Sun TV called “Ooh La La” and that’s when the name “Agam” was coined. I think when we started, we just wanted to play, perform somewhere outside the house, most of the time looking for work and whatnot. Very frankly speaking, we wanted to play for ourselves and that’s how we ventured out. The first live show we got to perform in was 2009, it took 2-3 years for us to find a gig and to accept us and our kind of music. Back in the day, Indian music instruments and Carnatic genre was something pubs wouldn’t be very supportive to collaborate and it was more about the latest trends. But today, indie bands have become much more popular in terms of commercial viability and reach a lot more venues have come up to support independent music.

Independent music has drastically changed in the last decade and as for Agam, our genre-Carnatic Progressive rock is something we didn’t plan initially, to be honest, but as we explored, we realized how rooted it was within us and we played what we were individually influenced by, and this amalgamation of Carnatic music and our individual personalities reflected on our music. As for the band, our genre-specific music represents our true identities and tastes, which further has helped us carve a niche of our own.   We have also started working on writing our own songs and try and make sure they do not have any similarities to our previous albums, The Inner Self Awakens, and A Dream to Remember.  Each song we write, we make a conscious effort to reinvent ourselves and try out something different.

The name Agam is so unique. How did this idea come about? What’s the story there? And can you share with us how did the band form?

So, Agam is a pure Tamizh word which literally translates to “The Inner Self”. So, we named it Agam, also because most of us are from South India and it represents our identity and roots. Even though individually we have different influences, as a band, we only play the kind of music that appeals to our true personalities.

You guys primarily focus on Carnatic Progressive Rock. It’s an unknown genre to people in India. Why specifically this fusion and style?

We are definitely not a fusion band, as we do not combine two genres. We focus more on Carnatic music and do not try to mix different styles. We are very authentic and unabashedly proud of being a Carnatic music band.

You have produced two fantastic albums. Beyond each song, you have a unique and different concept. What is the ideation process like behind each of them?

Honestly, I don’t know how to answer that question. One thing we constantly focus on is that the melody should not get ruined, the power and energy of the arrangements should compliment the melody. A lot of thought goes behind when we sketch out the arrangement which can enhance the melody and elevate the mood of the song. We have multiple versions with respect to the arrangement of the song and each song should convey the mood. We try and avoid repetition as much as possible and we tend to spend too much time in the arrangement because we believe it should appeal to all of us. If we think it’s not up to the mark, we don’t get through with it and let it go, and that’s also one of the reasons, we only produced two albums, so far. In fact, I would say we do not follow a fixed formula but we keep trying to come up with something new and different for each song.

Today’s generation isn’t very fond of attending Carnatic music concerts or katcheris. You guys have changed the scenario completely with your packaging of Carnatic music and manage to gather crowds for each concert. What is your opinion on the current scenario and the future of Carnatic music?

Fundamentally speaking, Carnatic is a very great form of music. In the beginning, I learned to appreciate Carnatic music once I joined Agam and it was an eye-opener in terms of nuances, intricacies, and depth. Most of the members have learned Carnatic music or have a Carnatic music background, and only when you know the art form, you can appreciate it completely. Carnatic Progressive Rock is a different format and I think we would call ourselves different practitioners of the same art form. I hope our music inspires others to promote Carnatic music and appreciate its greatness amongst the younger generation. Having said that, I think people just like how they explore other genres of music like Rock, Jazz, etc. They should also be open to try and learn about Carnatic music.

As an indie band in India today, what are the struggles you face on a daily basis?

Definitely, we need to be practical in our compositions and be aware of what will work and what won’t. We also need to think about factors like commercial viabilities, venues and the reach to the audience. If you do everything which only you like, it might hinder your growth and I think it is important to balance both commercial and personal needs and tastes. I think many bands are doing well these days and there’s a lot of talent coming up every day. It is important to do what you believe in and be true to what you do, sometimes the outside world can be frustrating, but it is important to keep going.

You guys have composed for Solo (Malayalam Film). How does the dynamics work and what are the challenges involved when a band composes music for a film when compared to a sole musician?

Basically, the director’s vision should be aligned with the distinctive style of the band. A band is basically an amalgamation of distinctive people and different sounds they get into the song. Sometimes, the music played in the theatre might be different from what the band originally composed. It is important for the director to understand the kind of music the band produces. As long as there are similarities and mutual understanding between the director and the band, it will reflect on the output.

What are your future projects? Will you be venturing out into film music?

If we get any interesting opportunities to compose for films, we’d like to take it up. As of now, we are primarily working on collaborative music and a couple of other songs. In the next few years, we would like to produce more music consistently.

We see that now more and more bands are forming and some good talent is coming out. What advice would you give to upcoming bands in the indie scene?

One thing is for sure, never stop playing music. Our country is going through a big change and there is a lot of scope of discovering new talent and exploring new genres. Keep the commercial angle in mind and pitch your work really well and keep in mind the mutual benefits. The harsh truth is, it will help to have another regular source of money because your passion for music might not guarantee income and it is important to keep going and be commercially stable. That is the hard truth in our country.

1. Artists you’d love to collaborate with?

We are already working with Kaushiki Ji (KaushikiChakraborthy). She is from a Hindustani music background and we’ll be performing in Singapore in November. We are generally excited about any musician who can bring a unique sound or voice on board and create great music together.

Each one of us loves different stuff and we listen to different sorts of music. Off late I’ve been listening to punk, Indi Soul music, Jazz.

3. Films you would love to compose for? Favourite film soundtrack?

Recently, I’ve been listening to the discography of AR Rahman. It is mind-blowing how he composed the melody and arranged beautifully way back in the 90s. It was way ahead of its times and is still relevant even today and I learned to appreciate his work a lot more now.

4. Any funny incident while performing?

Many actually, it happens during every show. There were times when Harish accidentally pushed the monitor and it fell off the stage, another time when my guitar strap came apart on stage and I didn’t realize it. Sometimes, when Harish interacts with the crowd, we don’t hear what he’s singing, and once because of the lights, we were unable to see each other. During solo performances, there were times we took tea breaks during a show, off stage.

5. You’ve been in the Indian music industry for almost 15 years now. How would you describe your journey? And looking back, is there any moment that you feel you could have dealt in a better manner?

Definitely, we could have released more songs but we are lazy people. We are working on creating more YouTube content and are becoming proactive about our music. Whatever listeners that we have managed to gather so far have been organic and not through paid marketing and we are very grateful to the people for supporting us all these years. We would like to do more music in the coming years.

Agam will be performing in various cities. Keep a lookout and whenever you get an opportunity, do catch them live. I can promise a surreal experience for sure. We wish Agam continues to grow and wish them all the very best for their future endeavors.