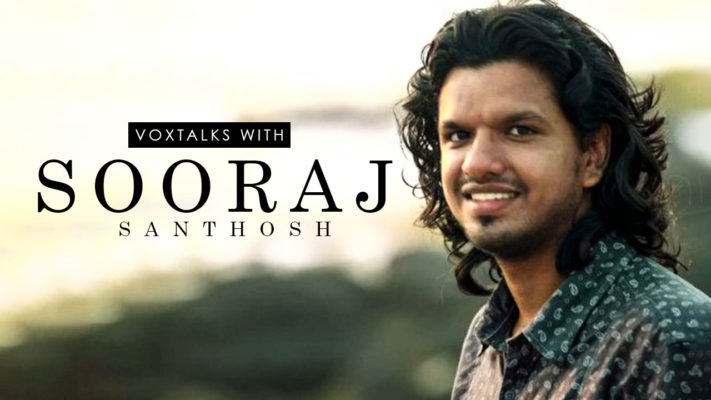 In an exclusive interview with Voxspace, we got to have a chat with this extremely talented indie artist, music composer and playback singer, Sooraj Santhosh. He is also the co-founder of the band, Masala Coffee who predominantly active in the independent music scene and have also composed music for films like Uriyadi, Solo and the upcoming Dulquer-starrer Kannum Kannum Kollaiyadithaal. Apart from having sung in Malayalam, Tamizh and Telugu, Sooraj Santhosh has also established himself in Hindi, Bengali and Kannada as well. We, at Voxspace, got to interact with this fantastic singer about his foray into playback singing, forming a band and creating a strong base for Independent artists in India and his musical experiences as he completes 10 years in his professional playback singing career.

Having worked with the most prominent music composers like Ilaiyaraja, Yuvan Shankar Raja, GV Prakash Kumar, Devi Sri Prasad and more, he shared his insights and the journey so far in such a pressure-induced industry. Here are the excerpts from the interview:

You have been quite active in the independent music scene for a long time now. How different is it when compared to when it started?

The number of bands and independent musicians trying their luck has definitely increased, especially when compared to the time when I entered this field. Though, here, popular music has always been film music, of late, people have started to acknowledge the existence of parallel music and they are listening to it and these musicians are getting more platforms to perform. But I feel that independent music will grow better and bigger, overcoming all the marketing difficulties, in the coming days.

How different is independent music from playback singing for films?

Freedom. When I don the role of an independent musician, there is this freedom I enjoy which helps me and any such artist to articulate our ideas and manifest it in the way we want. Independent musician can thus communicate through his/her art and can convey his/her messages and ideas. On the other hand, in case of playback singing we are expected to follow what the director needs besides other factors like the story and the situation that mostly wield it.

How did your first song with G.V. Prakash happen? What’s the story behind it?

It happened when I was doing my Post-Graduation. It was through the musician George Peter that I got to know about an audition at Chennai for which I went. Nearly a year later, I got a call to record a song for G.V. Prakash.  And I thus I debuted as a playback singer, by singing a Telugu song for the movie Darling in the year 2010.

How is it that you are able to adapt to different languages in terms of diction, pronunciation and getting the correct emotion right at the same time?

Given the current scenario, I don’t feel it is so challenging to sing in any language, for any one. I take down the lyrics in Malayalam, my mother tongue. And Malayalam, with its vast repertoire of alphabets and sounds, makes it easy to pronounce any word belonging to any language. Moreover, I seek correction from people around and if one feels that I give the correct diction, then I should say that it is a collective effort. Technology has also developed to that point where rectifying mistakes is no big deal.

Well about emotions, it is music that conveys emotions to me. Some pieces successfully do convey it, while some fail to.

You have worked with some of the best music composers in the country. Can you describe your experience with each of them?

Ilayaraja: It is for the Tamil movie Kida Poosari Magudi that I first sang for Ilayaraja. He sat with a harmonium to teach the song and that whole learning experience was great. The recording also went well in that I could pull it off in a single take. Though I was tensed when I went there for the recording, I should happily admit that it was one of the quick recordings I ever had.

Devi Sri Prasad: After my debut song, it is Devi Sri Prasad who gave me a break in Telugu with a song for the movie 1-Nennokidine. He is all fun and cool to work with.

G.V. Prakash: G.V. Prakash is the one who composed my first song as a playback singer. Though I haven’t sung any other songs of his, I remember the first recording to be really interesting.

D.Imman: My first recording with D.Imman was for the Tamil movie Pandiyanadu which was followed by a number of songs. He is so particular as to what he wants from the singer and at the same time provides us with the artistic freedom that we need. The whole recording session with that great person is so relaxing.

Vivek Sagar: I think Vivek is the one who brought alternate music into the frontiers of film music. He is so innovative and is always after something fresh. Probably because of his roots in independent music industry, he has much respect to independent musicians. I totally admire the musician that he is. I got a chance to sing for his debut movie, Pelli Choopulu, recorded at Chennai and the last I sang for him was for the movie Brochevarevarura, at his studio in Hyderabad.

You co-founded a band named Masala Coffee. How did it all happen?

It all began as a jamming session for the program Music Mojo in Kappa Tv which was organized through Varun Sunil. It was once the videos of that show became hugely popular that this band got its formal, professional mode to it.

What are the dynamics and states involved when a band composes music for the film compared to a solo musician?

I don’t think I can figure out any difference between these two. In either case, musicians are involved in an artistic process. And probably in the case of a band, ideas and suggestions might come from more than one person and hence many choices. That’s it.

You have been in the Indian music industry for 10 years now. How do you describe your journey?

I have always wanted to be closely associated with music, to learn more about music. This one tag of being an industry person is not what I aspired for but it is a happy, great by-product of the whole process. I admit that I feel extremely happy when I render my voice to different languages, but still I am striving for betterment. Let’s see where this journey would take me to!

What are your future projects, both as an independent singer and for Masala Coffee?

I am working on my first independent, multilingual, solo album now. It has songs arranged on a particular sound scale and would convey the ideas that I have always wanted to convey to the world and it would be released soon. As a playback singer, I have sung for many movies all of which would be released in the near future.

As with Masala Coffee, some of the songs of the band’s album Kimaya is already released and the rest would be released sequentially. The songs of the Tamil movie, Kannum Kannum Kollayadithayi, composed by the band will be out soon. The band has made its debut into Kannada movie industry by composing a song for a movie titled, Mundina Nildana and the song is already released.

Favourite songs: It is very hard to say. It depends on my mood, state of mind etc.

Artist you would like to collaborate with: I would love to collaborate with Quincy Johnson Productions and definitely with the folk musicians of our country. Well, it is not a person in particular. I would, honestly, love to work with as many people as possible. I am looking forward to it

Favourite genre: Though I am open to all genres, I have a special liking for alternate genres in music

We wish Sooraj Santhosh all the very best for his future endeavours and hope to see many more beautiful pieces of music added to his discography.