Review Of El Camino [The Breaking Bad Movie] : A Fitting Epilogue To A True Epic 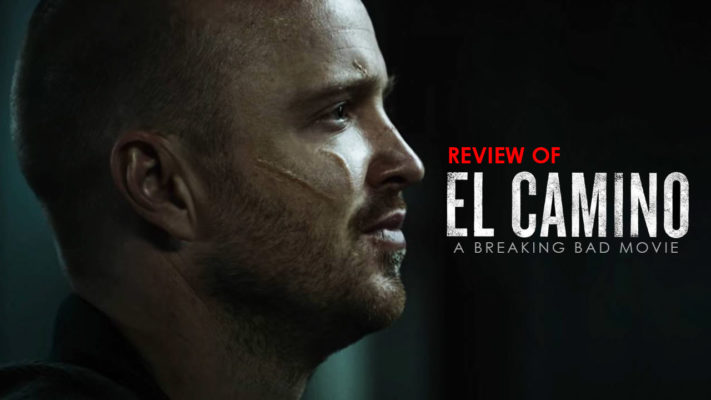 An Introspective And Meditative Journey Towards A Well-Deserved Catharsis.

Breaking Bad is one of those stories that captured the attention of the world like few others. Over a period of six years, we saw the evolution of a brilliant man caged by his ineptitude and lack of courage in a prison of his own making into an amoral monster. It showed us what happens when a self-righteous man like that tastes true freedom and the devastation he leaves behind in pursuit of power. Vince Gilligan ended this saga with a brilliantly orchestrated explosion of a finale. I knew that the story ended, I knew that it was perfect and couldn’t be better. But I could not help but want to know what happened to Jesse, one of the most tortured, broken and extremely sympathetic characters ever committed to screen. I wanted him to have the redemption that I knew deep down that he deserved. So, when I heard of this project, I was cautiously optimistic.

Begins Right Where We Left Off

The film opens with a small flashback to a conversation between Mike and Jesse, right before shit hit the fan in the final season. We see a naively optimistic Jesse making plans for his future, little does he know what awaits him. And just like that, the show yanks you back to where we left off. Jesse is escaping from the red-necks who tortured him for the last six months and the only thing on his mind is survival. The story of El Camino follows Jesse on his journey to find his own redemption and learn about the one thing that has been staring him in the face all his life, consequences for his actions. Aaron Paul fills this role with the right amount of pathos and regret that the film demands.

Vince Gilligan who also directed the film leaves no stones unturned to give this beloved character the perfect send-off he deserves. While Breaking Bad had a lot of influences from classic westerns, it never fully became one. But with El Camino, Vince Gilligan takes a deep dive into the western territory. All the tropes of a classic western are here, a man with nothing to lose on a mission to find his freedom, the lawless wilderness filled with dangers at every corner, the absolute amorality of the land and the unforgiving nature of fate. All the trademarks of a great Breaking Bad story are here too, the last-minute escapes, long montages of searching for things, ingeniously simple hacks for complex problems and the brilliantly subdued yet poignant dialogue.

A Nostalgic Treat to The Real Fans

The show is also full of nostalgia bombs. There are very well-placed strategic cameos throughout the film that will get any fanboy excited, but they never overstay their welcome, neither do they cut into the flow of the story. Due to the story taking off right where we left, the consequences of the finale are still pretty relevant which allows for there to call-backs without it being pandering. I am struggling a lot here not spoil anything, so I am going to keep it as vague as possible. Rest assured to say, if you know what you are looking for, there are a lot of Easter eggs to find. The Creep and his spider, that is all I will say.

As Close To The Real Thing As Can Be

The performances all around are perfect, and I can’t find fault in that department. At a craft level, the movie is as close to perfect as can be. I miss the intro music of each episode and due to the film being presented in 2:39:1, it feels slightly different. The camera is also not as jittery as it used to be in the show. These are slight changes that are different, but they never hinder the experience of the show. The only thing that I would have wanted is for it to be a little longer, so that I could revel in the awesomeness of this world for some more time.

El Camino is a fitting send-off to a saga that I will remember for the rest of my life. It will always hold a special place in my heart, not just due to the brilliant storytelling. But due to the various things that I learned about family, guilt, responsibility, loyalty, and greed from the show. Because of this, I cannot look at the film as just another film, it is a cathartic experience I have been waiting for. If you have not seen the series before, I urge you to watch it, you are truly missing out. If you have watched the series, you are going to watch this anyway.