Review Of The Sky Is Pink : Priyanka And Farhan’s Performances Keep This Slow-Paced Film Afloat

Posted on October 11, 2019 by Srividya Vanamamalai 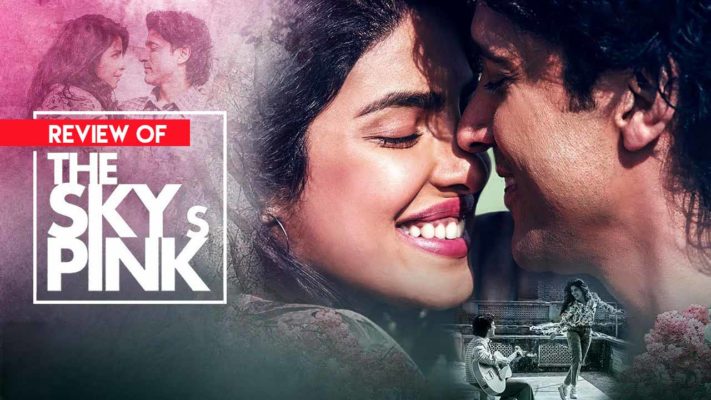 The Sky is Pink, directed by Shonali Bose, starring Priyanka Chopra Jonas, Farhan Akhtar, Zaira Wasim, Rohit Saraf in lead roles is a sob drama that aims big but falls short for various reasons. The movie is inspired from a real-life survivor, motivational speaker and true events of a girl named, Aisha Chaudhary. Based on the true story of Niren and Aditi Chaudhary’s struggles to keep their daughter Aisha alive, is the premise of this film. The film which almost spans 25 years, is conveyed through Aisha’s voiceovers after she’s in the grave. There’s a humorous attitude she declares her demise- “I’m dead, get over with it.”

Aisha Chaudhary is diagnosed with SCID (Severe Combined Immuno-Deficiency) also known as pulmonary fibrosis, in which lungs are weak and function on a 50 percent basis. The couple, Niren (Farhan Akhtar) and Aditi Chaudhary (Priyanka Chopra) discover that this has occurred because of a rare gene that got passed on in the family. They come to terms with it in a mature way when they lose their first daughter, Tanya, who dies when she’s barely six months old. They go on to have another child, a son named Ishaan who turns out to be a healthy baby and their third child, Aisha shares the fate of the first child almost. Struggles, compromises, long-distance marriage takes a toll on Niren and Aditi who decide to get Aisha treated extensively in London with the best medical attention possible.

At the end of first half, I was relieved that the story took a pause and an hour seemed like eons. Farhan Akhtar and Priyanka Chopra Jonas keep you interested as you feel empathetic towards them as they manage to gather funds for Aisha’s treatment. Despite being from an upper-middle class family, they persuade you to root for them and their family. The quirky repartee between Niren and Aditi add a sense of dark humour through difficult times. Aisha’s quirky and humorous take on life is enjoyable but gets tedious after a point as they are overutilized in this almost-weepy family drama. You could feel the signature style dialogues brought to the script by writers- Juhi Chaturvedi and Nilesh Maniyar. Somewhere deep down, it gets too cringy to listen to Aisha’s voiceovers which come across to be pretentious and inorganic.

Trying To Be Too Quirky And Humorous…

The film’s biggest weaknesses are its writing and editing, which can test your patience levels and tolerance. Problems arise when the film repeatedly uses three scenes in different pretexts and equations i.e. Aisha’s parents fighting and arguing, her sick life and how her parents tried their best to maintain a happy household. Clearly, 20-30 minutes of the movie could be cut down since it’s based on a thin thread of a premise and reduced to 90 to 100 minutes of full-fledged drama. The film tries to balance the stories of the couple and the daughter, and gets lost in the process, leaving hardly an impact on the audience. Aisha’s family is named in a quirky manner which is cute in the beginning but loses its substance gradually. They are referred to as “Panda” (Niren Chaudhary), “Moose” (Aditi Chaudhary) and “Giraffe” (Ishaan Chaudhary).

The sets and the fashion sense of the 90s and 2000s is very accurate and help the audience blend in to the atmosphere. The story, since it spans from 1987 to 2015; the transition of time is shown beautifully and leaves you nostalgic of the times that seem long gone. The bellbottoms, floral tops, the suitcases and those bhandini-designed sweet boxes create a reminiscence you dearly miss in these modern times.

The background score and songs just pass off like distractions and are not extraordinary per say, as they are not very innovative or serve their purpose fully. The sound design thankfully does not sway away from the story and elevates the story when required.

A Breezy Romance That Does Not Fulfil…

Farhan and Priyanka’s performances are top-notch and you root for the both of them, as characters and actors. Their romantic sequences are narrated like flashbacks by their ailing daughter, Aisha, leaves you craving for more of their story. It would have been interesting to dwell deeper into their romantic story and know more about their romantic journey and also, the struggles in London they face are reduced to montages and song sequences. The film loses its ground when it tries to define its characters and relies on dialogues and it’s superficial open-mindedness that gets boring and deliberate after a point, where a middle-class girl like me is unable to relate to. Their difficulties come across like first-world problems and are not compelling enough for a viewer who was promised a romantic family drama. It becomes a sob story, and just a little bit whiny and doesn’t find its footing due to its writing and paper-thin characters. Throughout the film, Priyanka keeps you entertained and it feels like she is the only character who was fleshed out properly and was given the right amount of screen presence. The story keeps shifting its focus from the couple to Aisha and the story is stuck at a crossroad and struggles to find its way forward.

The film is a courageous attempt at showcasing a tragic story in a cynical yet funny dimension, which makes it refreshing. Undeniably, it’s an inspiring story to listen to but somewhere when it is translated to the silver screen, the essence of it is lost. I liked the film in bits and pieces, a few standalone scenes were fantastic but as an overall package, the film is disappointing for its stature and scope.