[VoxSpace Review] Once Upon A Time In Hollywood : A Navel Gazing Attempt At Introspective Cinema Which Just Ends Up As Boring 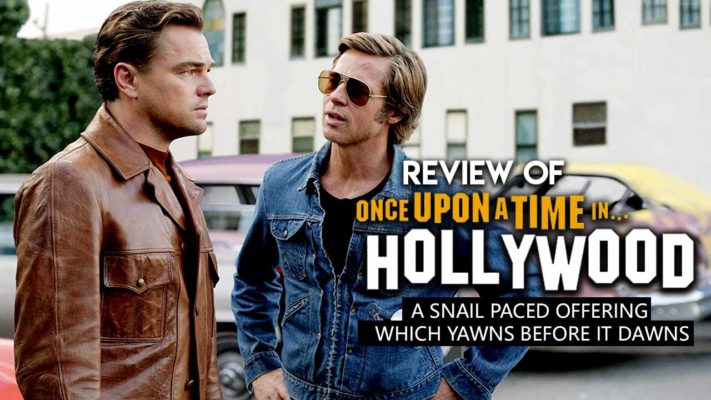 The End Of An Era, On And Off Screen?

Quentin Tarantino’s latest Magnum Opus ‘Once Upon A Time in Hollywood’ is out and it is one the most fascinating, bizarre and over-long movie about movies that I have ever seen. With this film, he turns his gaze towards Hollywood itself. He has always filled his movies with references obscure and apparent all throughout his filmography, and now he free-reigns to put in as many references and Easter eggs as his fan-boy heart wants to put into the film. The film follows two parallel stories in 1969, One of an aging TV star Rick Dalton (Leonardo DiCaprio) and his stuntman Cliff Booth (Brad Pitt), who is at the end of their respective careers and are considering retirement and the other being that of Sharon Tate at the beginning of her very promising looking career. The two stories meet on one fateful night due to the infamous Manson Family with a Tarantino style twist thrown onto it.

I Am A Tarantino Fan Boy

See, I am one of the biggest fans of Quentin Tarantino. I have watched every film of his including ‘Four Rooms’ which is an anthology and films that he has only written like the ‘True Romance’, ‘Natural Born Killers’, etc. I have liked almost every one of his films except for ‘Four Rooms’, I even like ‘Death Proof’, which is commonly known to be his weakest film. I understand that his films have always been meandering and languid in their pacing, and have always been a little indulgent. That is what I liked about them, they have a point of view, a perspective, and that is what made him an Auteur. I am saying all this a pre-fix because I don’t want to be accused of criticizing his work without understanding the auteur’s back-catalog. But I did have some issues with his latest film, so let’s get to them.

ONCE UPON A TIME IN HOLLYWOOD - Official Teaser Trailer (HD)

The film most definitely is a love letter to the cinema and the era that he clearly loves and reveres. Everything you expect from a Tarantino movie is on full display here, the fascinating yet slightly off the hook characters, the beautiful and detailed production design, the long conversations about mundane issues which inform character, etc. The problem here, which I never felt before or maybe I have grown out of it, is that it just felt way too self-indulgent and boring. I tried to go with it as long as possible, but I do remember the scene that totally brought me out and made me give up. It was the scene where he recreates a scene from an old TV show called Lancer, in which Rick is playing the heavy. As the scene began, I thought this is cool. It looks so authentic, but soon I realized that this was not going to end. It just went on and on for about 10 minutes it felt for the punch-line that Rick forgets his lines. There are several sequences like that which have absolutely no reason to be as long as they were.

Another big problem was that the film was indeed too languid and almost stagnant. There are his standard long scenes building up to something, like the poker scene in ‘Inglorious Bastards’ and the dinner scene in ‘Django Unchained’. While those scenes had unimaginable tension built into them, here an attempt at a scene like that at some forsaken ranch scene just felt cartoonish and predictable. I also felt it was a little disrespectful to Bruce Lee and that is just my personal opinion.

ONCE UPON A TIME IN HOLLYWOOD - Official Trailer (HD)

What It Loses Because, Of Pacing, It Makes Up Through The Performances

Now let’s get to what works. The cast obviously is top-notch. The three main leads perfectly fit their roles and in fact, excel. They are not doing anything new; we have watched them play these kinds of roles, but they are still great. All the supporting cast is great including Al Pacino to Kurt Russell to Maya Hawke. There are a lot of ‘blink and you miss it’ kind of cameos from Damian Lewis to Lena Dunham to Michael Madsen who are all amazing. The production design is amazing and the cinematography lets you luxuriate in these amazingly detailed sets. The editing could be crisper, but it is what it is. But finally, there is one scene towards the end that gave me really what I was looking for. You will know it when you see it. It was absolutely bonkers fun and it has one of my favorite uses of Chekov’s gun that I have ever seen.

On the whole, the film is a little draggy and self-indulgent. The film at a meta-level feels self-reflective because an artist at the end of his era is making a film about the end of an era that he reveres. It is definitely not for people who are not familiar with his work. To understand his work, watch earlier films so that you would get a better context for this. If you are a Tarantino purist, you are anyway going to watch it, just let me know what you thought.