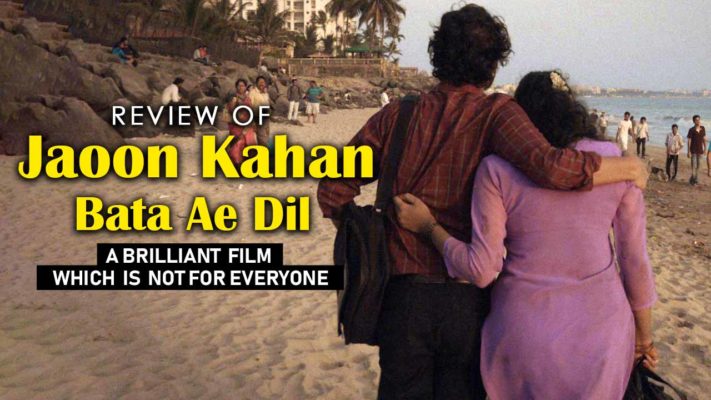 A Striking Narrative Which Never Shies Away From Speaking Up

In one of the scenes in this movie, the leads – Khushboo Upadhyay and Rohit Kokate, discuss breakups and come to a conclusion that it doesn’t matter if they are together or not. An argument put forth by a pessimistic and self-centric male lead, Rohit Kokate, is that they will remain irrelevant in the grand scheme of things, and it is in their own habitat and livelihood that they mean something. To which the lady in the couple, tiredly retorts saying that it matters to her since within their existence, they mean something. This perhaps defines the whole tone and story of ‘Jaoon Kahan Bata Ae Dil’ which after being screened at Mumbai Film Festival last year, is now available to stream on Netflix.

The movie starts at a comfortable setting, with Khushboo and Rohit (ironically they are never given or addressed any names within the movie) meet at the Marine Drive on a fine Saturday afternoon. In a beautifully composed single take shot which extends to almost 18 minutes in run-time, we travel with the couple as they walk from one end of the drive to another, discussing their lives and belongings. Khushboo emphatically talks about her roommate’s unpleasant breakup, and her own agenda of future with Rohit’s character based and extrapolated upon love and relationship. On the other hand, we realize that Rohit is a detached societal recluse who is mighty comfortable in finding faults at everything and judging everyone he hasn’t even met, to the point of projecting his reclusive nihilism as a mark of confidence and existence. Here is a man who is so embroiled in his own vision of things, that he fails to accept options and arguments. As a meta-reflective on the society, Rohit’s narrative through out remains that of inherent skepticism which dialed to hundred. In his state of comfortable narcissim, we witness his subtle and sometimes not so subtle jibes at Khushboo.

The Couple Reflecting Upon A Society

In a particularly interesting scene, the male chauvinist inside Rohit gets on full throttle when the couple take a cab ride to an Iranian café. His male ego is given fuel when he strikes up a conversation with the driver of the cab, in the presence of his girlfriend, and then starts to belittle her in a matter of fact manner. Khushboo who we see is overtly depended on Rohit, as a means for validation and self-worth, takes the abuse silently, as long as her preposition of his love towards her is met. The couple dynamics slowly but surely stride into the areas of politics, entertainment industry, philosophy and even reasons for relationships. Khushboo slyly and shyly steps carefully through the arguments, so as to ensure that she never hurts him back. The scene shifts from Iranian café to an almost empty movie hall.

It is from this point that we see the darker tones that the movie is bound to take. Rohit finds the movie hall as the perfect excuse to quench his sexual desire, as he keeps nagging Khushboo to blow him. We relate to the victim in Khushboo as she almost with unwavering determination, tries to cling on to Rohit despite his acts turning atrocious by the beat. This leads to the most disturbing and yet deeply satisfying finales I’ve seen recently.

As it were, this movie is not for everyone. And I would not recommend it for someone who is just recovering from an abusive relationship. However, it is a great study of modern society in its flawed best. The Writer and Director of this film, Aadish Keluskar, through the journey of this oddly matched couple in a day’s entirety, comments upon a decaying system of expectations and fantastical ambitions. In his lead man, he shows a coward who finds it best to skeptically judge everything around him, often shifting the blame of his failure in life to external forces. He masks his insecurity with the veil of cynicism. In a world where intellect is worn as an ornament, He becomes a king of his world for merely coming up with his own theories in dissing the society. In his female lead, the storyteller tells us the luxury of having dreams in a world which is quickly shifting gears to an abstract decadence. I would highly recommend watching this movie over the weekend. Having said that, sometimes the dialogues and the thematics plunged into within this movie, could be highly disturbing for many. As they say realism often cuts deep and hurts very personal.